By Darlene Hawley – To some, a cemetery is a scary place that is to be avoided.  This is especially true around Halloween or on dark and dreary nights.  Many ghost stories have been written dealing with cemeteries and events that have taken place in them.  But, in reality, cemeteries are wonderful places to learn the history of communities and the people who lived in them.  A cemetery is a time capsule of years gone by and our ancestors who lived long ago.  That is very true of the Old Wayne Cemetery located on Michigan Avenue next to the State Wayne Theater in Wayne.  I am sure we have all driven or walked by this historical landmark without giving it much thought or realizing the wealth of information about our history that it contains.
The Old Wayne Cemetery measures one and a half acres today and was first used for burial in 1834 when Sally Derby passed away.  She was buried in the eastern section on a small piece of land owned by the Ezra Derby family.  The western half was dedicated to the cemetery by the Clark family when they buried James Clark there in 1848.  The last burial took place in 1916 when John Frank was laid to rest with his parents and brother.  The cemetery was officially closed July 9, 1918 by the city council. In 1971 the fences were repainted and the brick pillars facing south to Michigan Avenue were erected before the dedication of the Michigan Historical Marker which stands guard over the cemetery today.
Pioneers Ezra and Sally Derby came from Massachusetts after being married in 1826. They settled in what would become Wayne when they purchased land from the orphans of George Simmons. (In 1824 Mr. Simmons purchased land and the first structure erected in early Wayne, a log tavern, built by George M.  Johnson. George Simmons ran the tavern but drank heavily and killed his wife one day while in a drunken rage.  He was the first and only man to ever be sentenced to the death penalty by hanging in the State of Michigan. The hanging took place in Detroit.)  Ezra Derby is the man credited with building our early village.  He started a saw mill, built a blacksmith shop and was appointed the Justice of the Peace in 1834. When his wife died that same year, he buried her on a piece of his land.  Mr. Derby’s town plat, 15 lots and the burial plot, was recorded in 1835. Ezra donated the burial plot to the fledgling community to preserve his wife’s resting place and for future burial needs.   The community became known as Derby’s Corner.  Ezra Derby married four more times.  His second wife was Harriet Hawley Collins who was a widow with two sons, Ira and Giles.  All three of them were buried in the Derby plot in Old Wayne Cemetery.  His third wife, Hannah Smith, was a widow who resided two households away from the Derby family in 1850. She was buried in the cemetery after her death in 1856. Henry Derby, son of Ezra and Sally, died in 1866 and is buried near the eastern edge of the cemetery outside of the family plot. Ezra Derby died in 1877 at the age of 74 and was buried with his first three wives.
Most women who lived during this time period led very difficult lives.   They were expected to marry, take care of the home and bear as many children as possible.  Though their husbands were the bread winners and received public recognition and acclaim for their endeavors, it was the women who were the backbone of the community.  In bearing many children to help with the farm and daily living duties, women put their lives in jeopardy.  Pregnancy and childbirth could be a harrowing experience in the 1800’s.  Many infants and some mothers did not survive.  Eliza P. Corlett died within three weeks of giving birth to her daughter Eliza and the infant died at the age of one month and 15 days.  Patricia Rose Smith Knickerbocker, wife of Richard Washington Knickerbocker, survived one week after giving birth to son Richard, who passed three days before her.  Grave stones in the Old Wayne Cemetery mark these sad events.
Even if mother and child survived the rigors of the birthing process, raising children to maturity was fraught with the perils of disease and accident.  Between 1837 and 1844, Obadiah and Laura McBain buried four children who did not live to see their first birthday.  Sophia Low and her husband Fredrick buried five children during the last two weeks of August in 1865.
Even though life was hard and often tragic for women of that time period, there were bright spots and happy times.  Women were beginning to become a part of the community and its workings.  In 1830 a small log school was built to provide “schooling” to the few children in the area.  Cornelia Hawley, sister of William Hawley and Harriet Derby, was the first teacher.  Sarah Perrin Morrison and Sarah Myers Houston were instrumental in getting a chapel for religious services for the inmates at Eloise.  Margaret Barnard followed her husband Charles as Postmaster in 1874.  Fanny and Loren Doolittle’s daughter Susan was a prominent photographer in the Wayne area from the late 1890’s through the 1930’s.
Many of the names of these women in our community long ago can be found on the tombstones in our cemetery today.  The men, women and children who lie there have stories to tell.  These stories can be gleaned from information on the tombstones and from reading their history in the archives of our Historical Museum.  Watch for the next edition of the Dispatch to learn more of the stories of our ancestors who are buried in the Old Wayne Cemetery.
(Information for this article was taken from the pamphlet “A Guide to Old Wayne Cemetery” printed by the City of Wayne Community Development Department.) 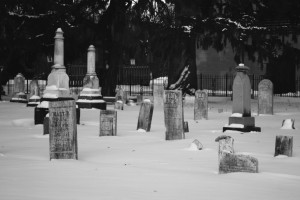 The Old Wayne Cemetery measures one and a half acres today and was first used for burial in 1834 when Sally Derby passed away.

What are your wishes for Wayne for 2014?

A year in review from State Representative Kosowski