After 21 years in office Mayor Haidous to bid adieu 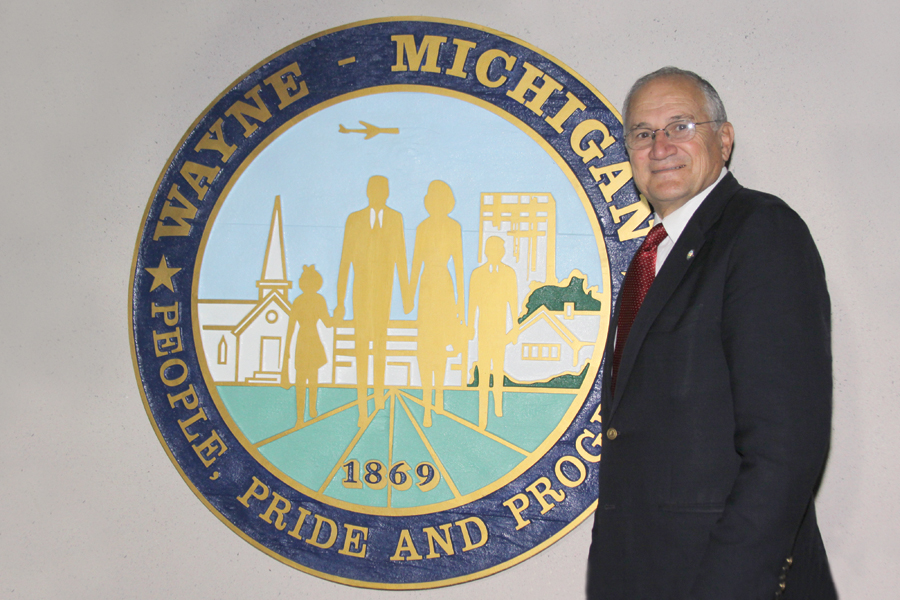 Mayor Haidous has served the City of Wayne for 21 years. He has run nine elections and won every one of them. He served eight years as a city councilman and then was the first mayor elected by the residents of Wayne. Photo by John P. Rhaesa

By Jenny Johnson – The American Dream can be achieved with a lot of hard work, discipline and support. Lebanese-born Al Haidous has lived in Wayne for more than 40 years and first became involved in local government in the 1980s. The owner of Al’s Friendly Market, at the corner of Annapolis and Howe, made many friends of his customers. Some of them began encouraging him to get involved in the city. He was soon appointed to the Zoning Board of Appeals, the Crime Prevention committee, Charter Review Committee and the Downtown Revitalization Board.
In 1993 he had a talk with then mayor Pat Norton and was encouraged to run for city council. He talked to his friends and family and got support from all of them.
“I decided to step in and ran and had a successful year. The election went good and winning was a high percentage,” Haidous said. “I didn’t get into the political arena for political or self interest groups. I was encouraged by the citizens of Wayne.”
Haidous said Wayne is unique and family friendly and people are close to each other.
“I serve this community with love and respect,” he said. Haidous is proud of the team of elected officials and city administrators he has served with the past 21 years.
“In 1993 I decided to work with the team in the City of Wayne. Wayne is run by a team and we have been lucky to have a good team,” he said.
Even though the council does not always agree on issues, Haidous said there is still a sense of teamwork.
“When we all come to city hall I have a vision and they each have a vision but we can’t do both so we set priorities,” he said. “I enjoy that and we have moved the city forward and improved the infrastructure of the city.”

Legacy of serving
During his tenure on council and as mayor, Haidous has been part of the building of the Aquatic Center in 1993 and the Police Station, Fire Station and Library. The downtown area was also improved with banners, new streetlights, landscaping and brick pavers.
“The city is doing what it should to help downtown,” he said. “Maybe we need more businesses but the downtown looks like a downtown now.”
The businesses that are in the downtown area have a lot to offer, Haidous said.
“It hurts me when people say we don’t have anything in Wayne. We have the Avenue, US-12, Northside, Leo’s, Designer Warehouse and we have entertainment with the movies,” he said.
It upsets him when residents talk bad about Wayne.
“We don’t owe too much on the fire station. The community is a dedicated millage. All other that we built is free and clear. We upgraded within our means. We have upgraded our streets and they are better than other cities. The cup is half full definitely,” he said.

Serving with honor
Haidous has been in the Wayne political arena for 21 years. He has run nine elections and won every one of them. He served eight years as a city councilman and then was the first mayor elected by the residents of Wayne.
He prides himself on having a good connection with his constituents.
“My experience in the City of Wayne is positive and (it is) not worth it to focus on negative. That has not been productive,” Haidous said. “We give the people the right to speak. A lot of people criticize how I run my meeting. I wouldn’t change that for the world. The constitutional right in this country is the backbone of our freedom.”
Haidous notes that Wayne is a small family friendly community and he is happy to give residents a chance to speak their mind.
The first time he ran for public office it was other people who encouraged him.
“The second time I decided on my own. It is an honor to represent this community,” he said. “I want to thank the people for the honor and trust they give me. It is bigger than life to me to be honored and trusted by citizens.”
Haidous said as he moves on to serving at the county level he will not lose touch with Wayne.
“I hope I spend my life serving this community by any way I can. As a citizen I will voice my opinion and be an active citizen,” he said. “As an elected official my love and determination is to do what is best for the community.”
The decision to run for Wayne County Commissioner came after a lot of thought and consideration.
“I felt is was time for me to leave and give chance to others who want to lead. Change is good,” Haidous said.
Current Wayne County Commissioner Kevin McNamara suggested Haidous should throw his hat into the ring for his seat. McNamara unsuccessfully ran for Wayne County Executive in the August primary.
“I didn’t give a fast answer. I filed one day before the filing deadline,” he said.
Prior to making his decision he spent a day in Wayne County. He looked at the budget, attended meetings and shadowed McNamara.
“I felt I was well qualified and feel I will be a positive voice. (On the commission) I am one voice of 15. This voice is for fiscal responsibility, good performance on services and good team player,” Haidous said.
Then he talked to his family and they supported and encouraged him.
“Then I came to council. They are my other family. I chatted with them. They said whatever you will decide I will support you,” he said. All six council members endorsed Haidous.
“That is something I treasure and appreciate,” he said.
Now he will have the chance to represent a larger constituency.
“I love the City of Wayne and felt I could expand to the district,” he said. Haidous’ district will include Wayne, a portion of Westland, Romulus, Belleville, Van Buren, Sumpter and Huron Townships.
It is the largest district in the county.

Time for change
Haidous was first elected Mayor in 2001. The city’s budget was around $23 million at the time. But since 2007 the economy has taken a hit and city council is trying to balance a $14.7 million budget.
“When I ran in 2001 I ran because I thought I could lead and bring the good team together. We have always made decision to move forward even with different opinions. We see different visions and each are good but can’t do both in this economy,” he said.
In the last few years Haidous has focused on a safe and clean city.
“Any elected official who went through the good and tough times knows that good leadership is for tough time. Tough time shows quality,” he said. Even as the budget decreased and full time employees were laid off or reduced to part time, the city was able to provide residents with vital services.
“We are still operating a city with  $9 million less. We are doing stuff.  There is a lot more pressure on the staff here. They are running full speed and still functioning and moving the city forward,” Haidous said.
Haidous said whether you agree with him or not, you can’t change the past.
“A lot of people think we shouldn’t have spent the money on infrastructure but I am glad we did it.”
Haidous says there has been a lot of turnover in the city manager’s office the past couple years.
“The council and I are a good team.  We have worked together and made the city keep moving. There are some good ambitions on the council. Some of them want to be mayor,” he said.
He thinks Wayne is on the right path. There is a new city manager, police chief and soon there will be a new mayor and another council member.
“New is good. New energy. I see the positive happening,” he said.
Haidous said he wishes the new city manager and city council the best. He hopes council continues to move the city in the right direction.
“We aren’t out of the difficulty but are on the end of it and hope the citizens continue to support the local government. Our success is measured by how much support we get from community,” he said.
“I am going to Wayne County knowing where I am going. I hope to be part of the team to change the negative.  My energy and my determination is still strong,” he said.
Haidous’ last city council meeting will be on Nov. 18. He will begin his position as a Wayne County Commission on Jan. 1. He has a two-year term.
Even as he moves to an office in Detroit, he plans to keep the lines of communication open with the people of Wayne.
“I am not changing my phone number,” he said.
“Every day I am on the job I try to do my best. There are no predictions on the future,” he said. “I am not the guy to sit in the rocking chair and take a nap. I am the guy who gets up and checks my calendar and then tells my wife what time I will be home.”

Living the American Dream
Haidous has been living in the United States since 1969. He and his wife, Mary have raised five children in Wayne and ran a successful business. For most people that is the quintessential American Dream.
“I walked in to Wayne in 1974 as a total stranger with a dream and hope to work and raise a family,” he said.
But Haidous felt he could do more.
“The American dream sometimes it leads you and sometimes you lead the dream,” he said. As a small business owner of a convenience store he never thought he would be in the political arena.
“I bought the business in 1974 and never thought one day I would be mayor,” he said. But he started to enjoy talking to the people who visited the store and was interested in pursuing public office.
“The American dream is like a little seed you put in the ground and you never know how large it is going to grow,” Haidous said.
“My dream of councilman to mayor to county commissioner came true and the tree still has the roots and is still growing.”

Wayne Youth to Send Rockets to the Rescue