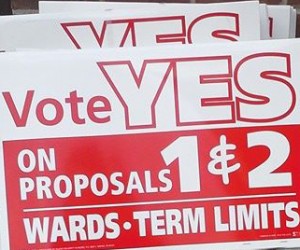 On Nov. 3 voters in the City of Wayne approved Proposal 1, which will divide the city into six districts and have council members elected from those districts. Candidates will be required to live in the district they represent and residents of that district will only vote for a council member from their district.
The mayor is the only position that will be elected citywide.
This will be effective in the primary and general election in 2015 for Districts 1, 2 and 3  and in 2017 for districts 4, 5 and 6.
But before voters choose council via districts the current council needs to create the six districts by redrawing precinct boundaries.  According to State Election Law each new precinct will not contain more than 3,000 residents and be contiguous and as close to permanent boundaries as possible.
A memo from City Clerk Matthew Miller included what needs to be done before the city can implement district voting:
The precinct boundaries need to be redrawn and reduced from seven to six. The City Code of Ordinance and City Charter needs to be amended.
New precinct maps and literature for the election-day process need to be created and all registered voters need to be sent a new Voters Identification Card.
Voting by districts also raise the following questions that will need to be addressed before the 2015 voting cycle.
How will the election of city council candidates be done- at large or by district?
How many candidates running will necessitate a primary?
What happens if no one from a district runs for city council?
How will city council fill a vacancy? If a candidate who lives in the open district cannot be found how will council make a determination to fill that position?
There was much discussion by residents and council.
Councilman Albert Damitio said, “ Proposal 1 passed by the citizens in Wayne and council needs to implement this charter amendment.”
Ron Roberts, who put the proposal on the ballot, said, “I don’t think there is any way for this to be implemented without further charter amendments. As long as you follow the spirit of the law and work with us this should be easy.”
Resident Christopher Sanders said, “The days of citizens sitting back and being called CAVE (Citizens Against Virtually Everyone) people are done.”
At the December 2nd meeting the City Council voted 6-0 to establish  a citizen committee to put together ideas on how to make Proposal 1 work and to have the city attorney draft a resolution on how to implement ward voting.

After 21 years in office Mayor Haidous to bid adieu