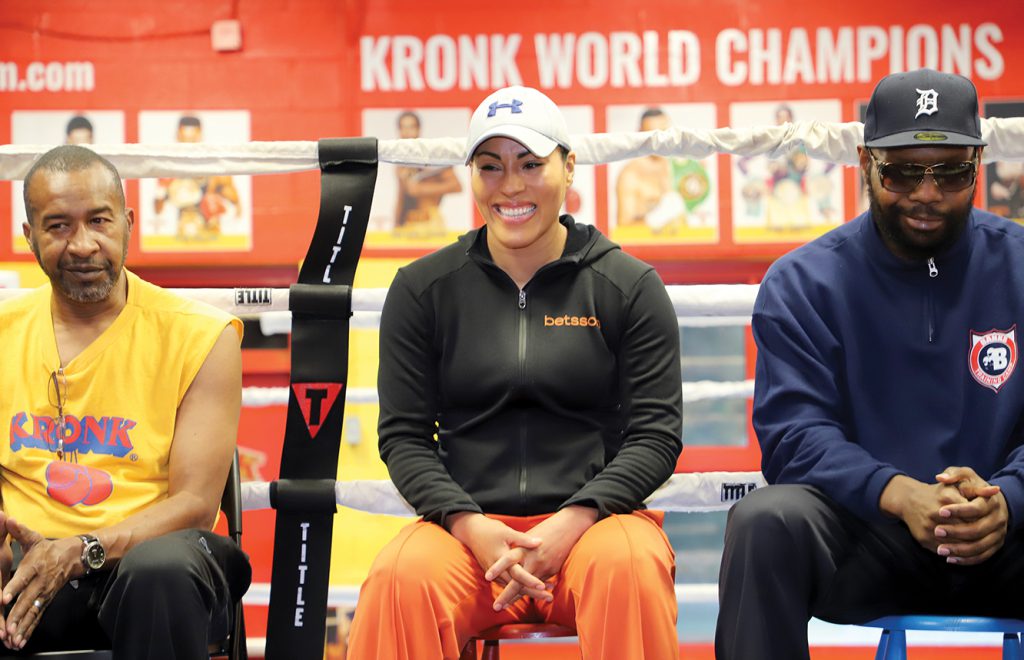 By Courtney Conover – It’s as if the earliest years of Cecilia Braekhus’s childhood prepared her for her life’s profession.
“I was born in Columbia and grew up in a foster home before I was adopted in Norway,” explains Braekhus, a world-class boxer who reigned as the undisputed female welterweight champion from 2014 to 2020. “I think when your first years in life happen to be quite the fight and struggle, it definitely prepares you for being a fighter throughout your life.”
Not that the remainder of her childhood would totally be defined by hardship and strife, however.
It was the opposite.
“[I lived] in a very quiet, nice area in the city of Bergen, and I had a very privileged upbringing,” says Braekhus, who is fluent in Norwegian, German, and English. “It was a contrast to my first years in life.”
Her relocation to Norway would afford Braekhus the opportunity to pinpoint her calling.
She started kickboxing at age 14, and after she became a world champion in the sport, she looked around and wondered what was next.
Enter boxing.
In her early twenties, she moved to Germany to pursue boxing and signed with the country’s biggest promotional company, Sauerland Promotions.
“I was the first girl there,” Braekhus, 41, remembers. “I was the only girl there.”
At the time, the company represented 15 male fighters, and the majority of the company’s staff was male as well. So, the company decided to honor Braekhus’s presence with an apropos nickname.
“They started calling me ‘The First Lady,’” she says.
The name stuck. And in keeping with her nickname, Braekhus would go on to amass a collection of titles and accolades.
She’s the first woman in any weight class to hold World Boxing Association (WBA), World Boxing Council (WBC), International Boxing Federation (IBF), and World Boxing Organization (WBO) titles simultaneously. She’s one of only 11 boxers in history—female or male—to hold all four major world titles simultaneously. And in 2018 Guinness World Records awarded her three distinguished recognitions: the longest reigning female boxing champion, the longest reign as a four-belt undisputed boxing champion, and the most bouts undefeated by a female world champion boxer.
Currently, Braekhus is training in Metro Detroit—and here in the City of Wayne—for an upcoming fight this November. In the meantime, Braekhus will remain ready for competition under the direction of Johnathon Banks, the renowned boxing trainer who has worked with a variety of well-known talents, including two-time world heavyweight champion Wladimir Klitschko.
“For years, I traveled with the Klitschko team—and trained with them in their camps—all over the world, from Miami to Austria,” says Braekhus. “It was an amazing experience.”
And this isn’t the first time boxing has led Braekhus to Detroit.
She says, “Johnathon Banks is an incredible trainer, and when he invited me to come to Detroit and train many years ago, I, of course, said yes. And now I’m back.”
Following November’s match, Braekhus hopes to return home to Norway in time for Christmas. And when in Norway, she will do as Norwegians do.
“Everybody goes hiking on Sunday morning…everyone,” she says. It doesn’t matter if it rains, snows, or whatever. Every child in Norway grows up this way. It’s a country of mountains—with fresh air and beautiful nature. Hiking on Sunday is the soul of Norway.”
The chances are good that when Braekhus takes her next trip through the mountains, she’ll do so with another win under her belt.
Braekhus’s professional journey thus far is yet another example for young athletes—particularly female—that discipline and focus indeed pay off.
Says Braekhus, “I think it’s important that women and girls know that we see the hard work. I just want to say, ‘Take your place.’ It is your rightful place. Don’t let anyone tell you something else.”

Families Against Narcotics coming to Wayne