By : thewaynedispatch
Comment: Off
Tag: City of Wayne, Ford Bronco was first introduced as a 1966 model. These models were built at the Ford Michigan Assembly Plant here in Wayne., Ford Motor Comapny, Wayne Michigan 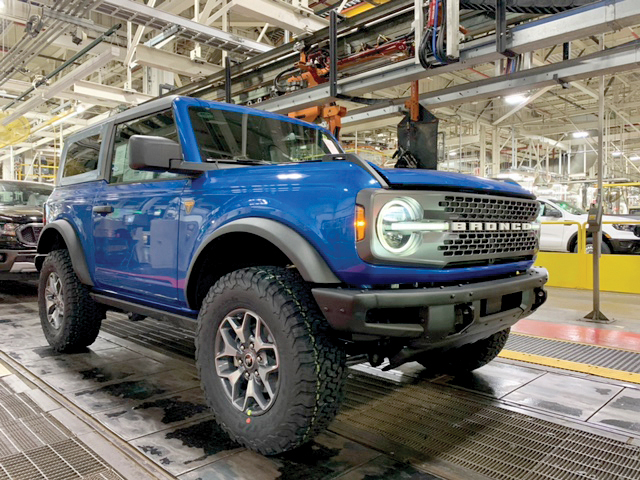 The first Ford Bronco comes off the line at Michigan Assembly Plant in Wayne.

By Sarah Shurge – In 1965 the Ford Bronco was first introduced as a 1966 model. These models were built at the Ford Michigan Assembly Plant here in Wayne. For 30 years the Bronco continued production in Wayne until 1996.
Now, after a 25 year absence, the Bronco is back.
The original Bronco became an icon for an adventurous lifestyle and its off-road capabilities.
“It’s not always ‘out with the old and in with the new,’” said Dwayne Walker, United Auto Workers Local 900 president. “We like our iconic things. The Bronco is iconic.”
Walker has been working at the Wayne location for 31 years.
“The Bronco is the pride of Wayne. It’s built here with the pride of workers in the community,” said Walker. “We have the best work force in Wayne. Anything they bring us, we can build it and build it right.”
With the much anticipated return of the Bronco, it’s important to remember the history and heritage of the original.
The Bronco saw a total of five generations from 1966-1996.
The first generation (1966-1977) was intended to compete with the Jeep CJ and the International Harvester Scout. The original 1966 Ford Bronco was an ORV (Off-Road Vehicle). Ford offered three body types.
The Bronco sold approximately 24,000 vehicles the first year.
The second generation (1978-1979) introduced a new Bronco staple, the rear window that lowered into the door.
The third generation (1980-1986) redesign included an actual Ford logo, instead of F-O-R-D being spelled out like it was common with trucks and SUVs during that time.
The third generation also made the off-road vehicle more compatible for on-road driving.
The fourth generation (1987-1991) looked like an SUV version of the F-series pickups and upgraded the interior elements to help the SUV hit its top speed at 100 mph.
The fifth and last generation (1992-1996) got rid of the removable hardtop making it a fixed roof.
In mid 1996, Ford officially made the decision to discontinue the Bronco and the last Bronco rolled off the assembly line in Wayne on June 12th, 1996. 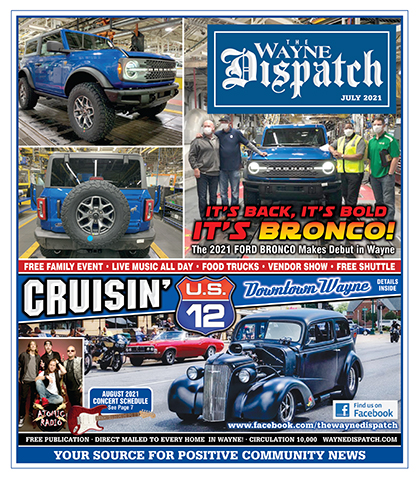 “The Bronco was one of the best selling vehicles of all time but sometimes you have to miss something for people to appreciate it when it comes back,” said Walker.
The public has shown its desire for the Bronco’s return with the amount of reservations Ford has already received.
According to the Ford website, reservations for the Bronco were able to be converted into an order in the beginning of this year. Summer 2021 is when initial Bronco deliveries are targeted to begin.
However, due to the extremely high number of reservations, deliveries will extend into 2022. Because of this, some customers will receive a 2022 Bronco.
With the public hungry for the return of the Bronco, Ford decided to do something different with how they built the new Bronco. This time around, they have designed each Bronco series around different types of adventure and you choose the series that fits you and your adventures best.
There are eight series to choose from; Base, Big Bend, Black Diamond, Outer Banks, Badlands, Wildtrak, First Edition, and Bronco Sport. As all Ford products are, the Bronco was designed, engineered and Built Ford Tough.
“When you’re in a Bronco, you can conquer anything,” said Walker. “You’re not even worried about potholes here in Michigan.”
If you can’t wait to see the new Bronco in person, you’re in luck.
The Bronco is on display in front of the Ford Michigan Assembly Plant in Wayne and will also be on display at Jack Demmer Ford during the Cruisin’ US12 event on July 10th. Be sure to stop by and check it out.

Klassy Kellection is keeping it classy