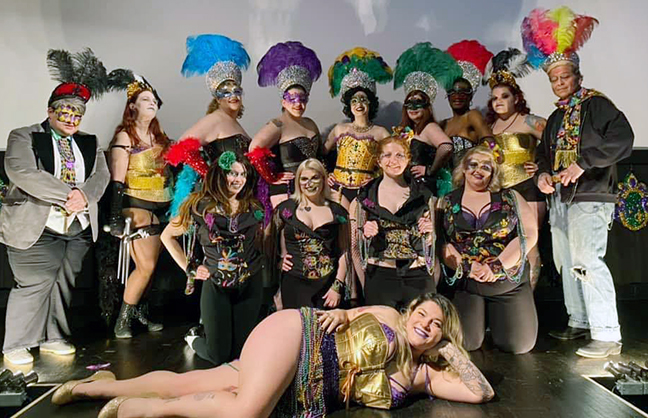 By Sarah Shurge – Squirt guns pointed to the sky. Water begins to fall on the crowd. It’s raining inside the theater.
To some, this sounds like madness. To others, this sounds like just a typical Saturday night with the Rocky Horror Shadow Cast at the State Wayne Theatre.
The night is full of costumes, lights, confetti cannons, squirt guns, and more. Each show is unique and different from the last.
“It’s an amazing thing to see. It’s a wild, liberating experience,” said Cory Jacobson, owner of Phoenix Theatres State Wayne. “It’s one of those things everyone has to do at least once. You just have to see it.”
If you haven’t experienced it yet, now is your chance because The Rocky Horror Picture Show with the Michigan Rocky Horror Preservation Society (MiRHPS) has returned to the State Wayne Theatre.
The cast performs twice a month (every second and fourth Saturday of the month) at the State Wayne.
“The idea came in 2012, because we have a stage and the right atmosphere that goes with the show. It’s not something you go watch in a mall shopping center. It’s suited well for the movie theater. The marquee outside also makes it really cool,” said Jacobson.
Jacobson bought the theater in 2014 from the City of Wayne, and recently decided to try to calculate how many people have seen the Rocky Horror Show since 2012.
Close to 15,000 guests is the answer.
“Guests come to Wayne from all over the country to see the show. It’s a well orchestrated show. It’s fun. It keeps selling out everytime we show it,” said Jacobson.
Cost is $10 per ticket. MiRHPS also sells prop bags at an additional cost.
“Getting tickets early is important because it sells out so much,” said Jacobson. 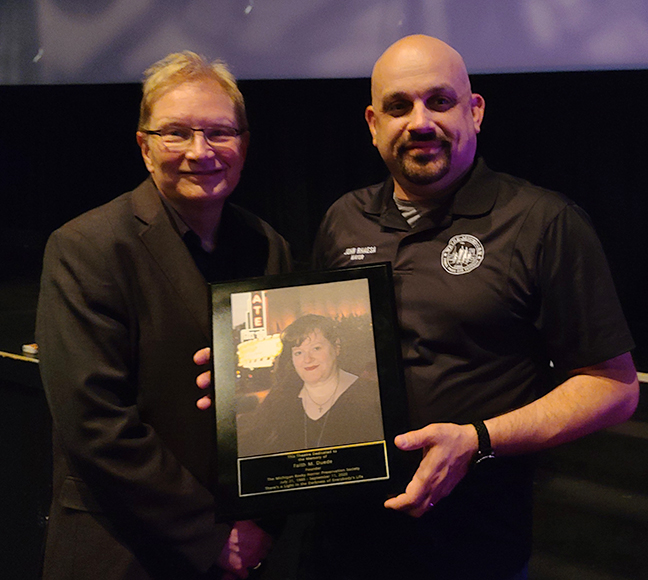 Cory Jacobson, owner of Phoenix Theatres State Wayne, and Wayne Mayor John Rhaesa show the plaque honoring the memory of Faith Duede, one of the founders of the Rocky Horror Preservation Society.

Tickets are available after downloading the mobile app, at phoenixmovies.net, or at the box office in the theater lobby.
“People come back week after week. Month after month. Year after year,” said Jacobson.
Faith Duede was one of those people that truly enjoyed The Rocky Horror Picture Show. She had such a passion for it, she and her husband, Robert B. Hubbard, founded the Rocky Horror Preservation Society.
She was a registered nurse at University of Michigan, but since 2012, spent much of her offtime sewing costumes for the cast.
“She had a spot in the production booth. People would go home and she’d be up there until 4AM sewing costumes. She was a brilliant costume designer and loved creating costumes for people,” said Jacobson.
Duede passed away unexpectedly last summer in the middle of the COVID shutdown.
Jacobson opened the theater in the midst of the pandemic to have a memorial service for Duede, where 25-30 people all stood up and talked out what she meant to them.
“The day she passed I knew I wanted to do something special for her because she was such a special person,” said Jacobson.
Jacobson hung a picture of Duede on the wall in the State Wayne and dedicated a theater to her.
“If anyone’s spirit is in that building and in the show, it’s hers,” said Jacobson.
The dedication for Duede happened on Saturday, July 10th, before the first in-person showing of the Rocky Horror Picture Show in 15 months because of the pandemic.
“It wasn’t a typical show,” said Jacobson. “Whether you knew her or not, you got a chance to understand what this was about. You could hear a pin drop.”
Work friends, coworkers, personal friends, family, and more showed up to the dedication.
“She was an extraordinary person that you don’t normally run into. I was inspired by her and she was a lot of things to a lot of people,” said Jacobson. “She will be very missed. The cast is determined to carry on in her mission.” 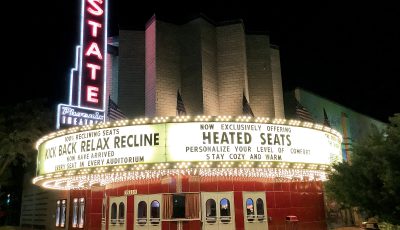