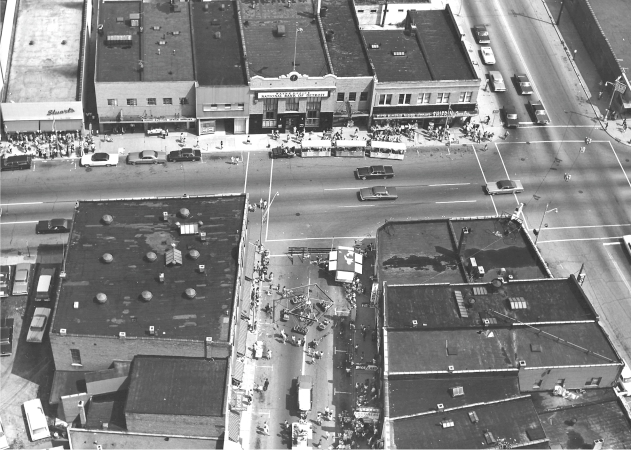 Looking westward on Michigan Avenue at Wayne Rd. (Fessler’s Restaurant is white building on the right side of picture with top of Mulholland’s showing behind it.) Photo courtesy of The Wayne Historical Museum

By Darlene Hawley – In 1824, when George M. Johnson bought 80 acres of land from the U.S. government for $100 and built his log tavern on land near the Rouge River and the old Sauk Trail, the landscape of the wilderness was changed forever.  Travelers from Detroit and the east found Johnson’s Tavern a convenient place to stop, eat and rest before continuing their grueling and dangerous trek westward, through the wilderness, toward Chicago.  In 1832 Ezra Derby purchased the tavern and made changes to the landscape.  He built a saw mill on the bank of the Rouge River,  a store, a blacksmith shop and a house for his family along the old Sauk Trail which was now called the Chicago Road (later to become Michigan Avenue).  He also named the little settlement Derby’s Corner.
Over the years this little village became known as Wayne and grew into a farming community and then a thriving town boasting beautiful homes, buildings, churches, schools, hospitals and all sorts of stores and shops to serve its residents.  Industry, including companies such as Unistrut founded by Charles Attwood, Prouty and Glass Carriage Company, Garwood Industries, Enot Foundry, Stinson Aircraft, Graham Page and Harroun cars, the Ford Motor Company and many others, put us on the map.  In the 40’s and 50’s this was a booming community.  Wayne became a city in 1960.  Several years after that, the landscape of our city changed drastically. The State of Michigan was pushing to have Michigan Avenue divided and run the east bound road around the downtown area.  It was believed at that time that the town needed to be rejuvenated to bring in more commerce and make the town more modern and dividing the road was a part of the plan.  Urban renewal began in the mid sixties in the southwestern section of the city around Roosevelt school.  The next phase took place in the subdivisions south of Annapolis and east of Wayne Rd. where old homes were removed and new ones built, alleys were closed off and streets blocked.  By 1967 urban renewal had moved to the downtown area where many beautiful old homes and buildings were torn down to make way for new buildings.  This demolition continued into the seventies.
Today we watch as our city’s landscape changes again with the building of a McDonald’s Restaurant in the center of downtown at Michigan Ave. and Wayne Rd.  It’s interesting to look back to see what stood on this site in years past.  The picture shown is Fessler’s Restaurant which was a popular eatery in the 40’s, 50’s and 60’s.  For years local businessmen held a morning coffee klatch in this restaurant even as it changed owners and became The Golden Boy Restaurant.  When urban renewal demolished the building the Golden Boy Restaurant moved to a building on the southwest corner of Michigan Ave. and Elizabeth.
The land at the corner of Michigan Ave. and Wayne Rd. sat vacant for many years until Chuck Muer of the famous Muer family restaurants, built a restaurant called Charley’s on the site.
Several years later they changed the name to Mama’s and Pasta’s.  Eventually the family closed the business and the building was sold to a family who opened Rex’s Restaurant. Rex’s has served the people of our community until recently when it closed and the news came that McDonald’s was building on the site.  Over the last few months we have watched as the landscape of our town changes again and we remind ourselves that nothing stays the same.  We have a mix of modern and new buildings that serve us well and a mix of older historical buildings that remind us of our past and its history.  That is the landscape of Wayne.  But the people are the heart of Wayne  and we have plenty of that in good times as well as hard times!!