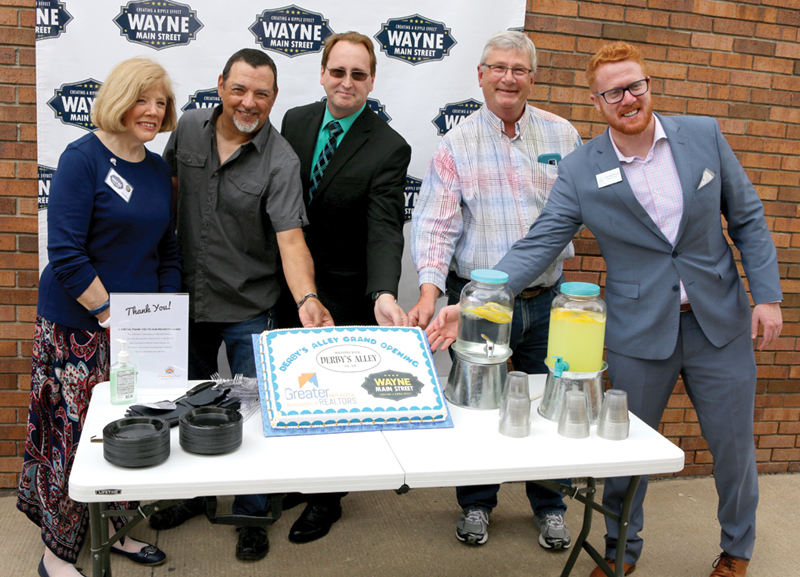 Donors, stakeholders, and members of the community joined Wayne Main Street for the official opening of Derby’s Alley last month. The event was a celebration of the many renovations WMS has undertaken in the alleyway. These improvements include new benches, bistro tables, and festooned lighting. Attendees were provided refreshments, as well as a cake made and designed by Baker’s Acre.
Opening remarks were made by WMS Executive Director, Maxwell Cameron, who publicly thanked the members of the Greater Michigan Association of Realtors, Michigan Realtors, AARP, Wayne Rotary Foundation, and City and Elected officials from Wayne who were in attendance. Special thanks were also given to Pat Rice and Re/Max Classic, who were instrumental in the success of the project.
WMS Board President Juan Bradford then took the floor to discuss how the Derby’s Alley project began and the progress the organization has made over the course of the project. The funders for the project were thanked again for their contributions of over $23,000, collectively. Other speakers included GMAR President James Iodice, Mayor Pro Tem Anthony Miller, and a special appearance from Ezra Derby himself.
“Wayne Main Street’s success with Derby’s Alley is a source of great pride for our organization.” stated Juan Bradford, President of Wayne Main Street. “We will continue to establish a beautified downtown for our community to enjoy.”
After the ribbon cutting, attendees enjoyed refreshments and mingled in the new public space. Wayne Main Street plans to continue improving Derby’s Alley throughout the next year, including the installation of a new hanging sign. The alley will be utilized for several events throughout the year and residents are encouraged to join WMS for Outdoor Game Nights, Wednesdays, from June 13th to July 11th.

Why is it called Derby’s Alley?
By Carolyn Marnon – Where did the name Derby’s Alley come from? Ezra Derby is considered the founder of Wayne, MI. Ezra came to Wayne in 1825 when he was 22 years old and purchased the first piece of land sold by the government in Section 12, Ypsilanti Township, Washtenaw County, Territory of Michigan. He divided the land into lots and started selling them.
In 1830, after Stephen G. Simmons murdered his wife, Ezra bought Wayne’s first business, a tavern. He then went into the blacksmithing business and then sold the shop in 1832. The first school of Wayne was started above that shop.
In 1834, Ezra laid out the first village plat on the north side of Michigan Avenue beginning at the east side of the Old Cemetery and running nearly to Second St. There were 15 lots facing Michigan Avenue (then known as the Chicago Turnpike). These lots were known as Derby’s Corners.
The site of Wayne’s first frame house was Ezra’s home located where the recently closed GI Surplus stands, right next to the alleyway now named Derby’s Alley.
Ezra Derby was once Justice of the Peace in Wayne. He had a total of five wives. His first was Sally Rugg with whom he had four children (Emma, Mary Ann, George and Henry). When Sally died, Ezra married Harriet Collins in 1834 with whom he had three children (Maria, Ezra and Harriet). When Harriet died, Ezra married Hannah Cotton Smith in 1851. They had one child, Martha, before Hannah died in 1856. Ezra then married Jane Melody. When she died, he took on a fifth wife. Ezra died in 1877. He and most of his wives are buried at the Old Cemetery in Wayne. The home he lived in during the 1870s is still standing at 34549 Norris St.
Most of this information is from an article in the Wayne Eagle dated June 24, 1959.