Detroit Zoo employees remove boatloads of trash from the Rouge 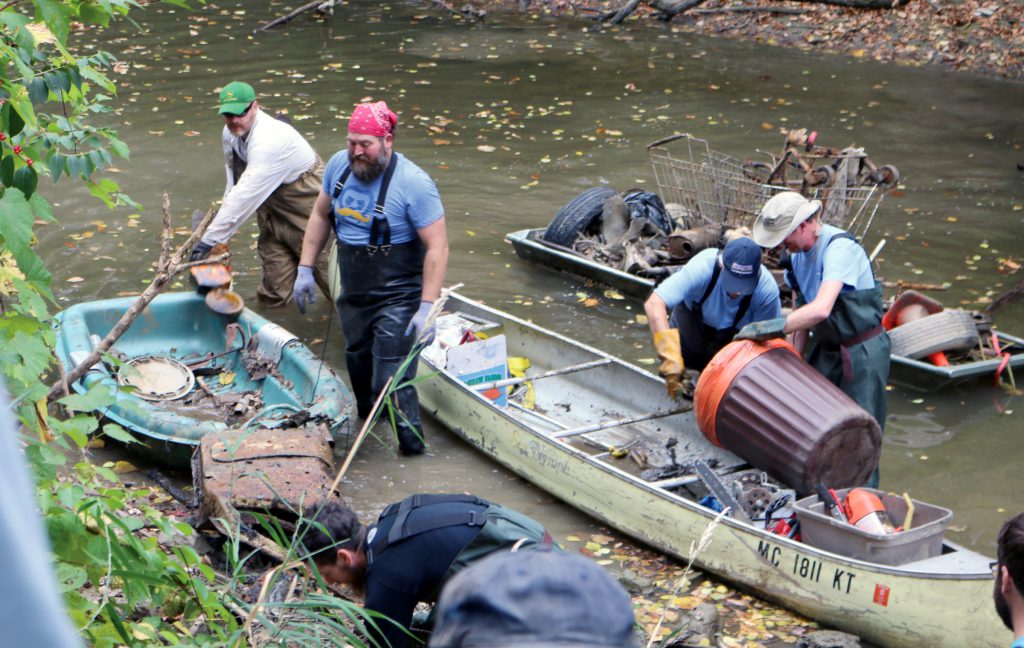 The employees of the Detroit Zoo are well known for the care they provide to the many animals that call the zoo home. But the employees have proved yet again, they also care about the local environment, especially the Rouge River.
The zoo sent 20 of its employees to Wayne on Oct. 4 to remove boatloads of trash from the river. Seriously, they removed boatloads of tires, shopping carts, broken glass, metal including several sewer lids and other trash from the river between Clark Street and Goudy Park. The group, working with Wayne DPW staff and local volunteers, floated boats down the river and filled them with the trash, removing it at the lookout behind the State-Wayne Theater.
In all, the group filled six dump trucks with the trash, which the DPW hauled away. Coincidentally, it was five years ago to the day that the zoo last visited Wayne to do a Rouge clean-up with about 40 employees. While this year’s group wasn’t as large, they worked just as hard and pulled out nearly as much trash.
One of the local volunteers who helped coordinate the clean-up with the zoo employees was Wayne resident Mathew Mulholland, who is president of River Restorations, a local non-profit organization dedicated to restoring the Rouge. He said it was great to remove all of the old tires and shopping carts that had been embedded in the river for years. He noted the most interesting piece of trash that was removed during the outing was a rusty, old car door.
All in all, it was very labor intensive work, Mulholland said, and the group impressed with its determination and grit.
“The hard working volunteers from the Detroit Zoo are a perfect example of how organizations can make a difference in the Rouge River watershed. By partnering their employees with local volunteers for a community service day, the zoo is helping to make recreational opportunities a reality on the Rouge River,” Mulholland said.
Friends of the Rouge, another non-profit dedicated to improving the Rouge River, helped coordinate the event. The group organizes an annual group canoe and kayak trip through the same section of the river that the zoo employees cleaned up. FOTR’s Sally Petrella noted that, in addition to the trash they picked up, the zoo volunteers also opened up a major logjam under the Wayne Road bridge and made some improvements to the canoe launch in Goudy Park.
“The Detroit Zoo staff are an incredible group of people who are not afraid of hard work, and there is no doubt that cleaning up this river is hard work,” Petrella said. “They pulled 10 tires, 5 shopping carts, a hot water heater, four sewer lids, bicycles, car batteries, a car door and more out of the river. They also reopened the canoe launch and freed up passage under the Wayne bridge, moving heavy boulders and logs. The water trail will be much easier to paddle now, and fish will benefit from the increased flow due to their work. We would love to have them back and hope they return soon.”