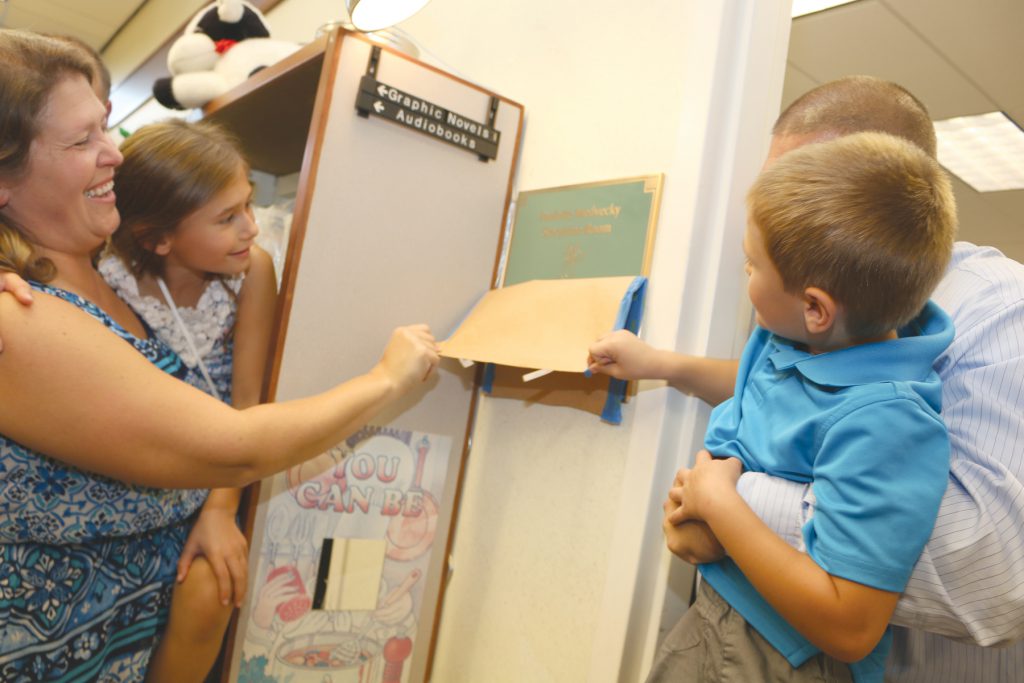 By Carolyn Marnon – It came as no surprise that more than 45 people packed into the little storytime room in the children’s section of the Wayne Public Library recently. They were there to honor their friend, mother, grandmother, Red Hat member and colleague, former library director, Paulette Medvecky. Paulette lost her battle to cancer several years ago after a valiant fight. Even after her diagnosis, she continued to be a vital part of the Wayne community.
On September 20, the room where Paulette had once led numerous storytimes as the Children’s Librarian, was dedicated in her memory as the “Paulette Medvecky Storytime Room.” Chairman of the Library Board, Ed Marman, spoke to those gathered. “Paulette was a very special person, not only as a library director, but as a friend too. She left us too soon.”
City councilman John Rhaesa told the crowd, “I really appreciated Paulette’s friendship. She’s greatly missed as a Rotarian and as a librarian in our city. I am grateful for the time we had with her.”
Current Library Director Steve McGladdery noted that he had been asked if it was a significant day when Paulette hired him at the library. His response? “Was it a significant day when Moses talked to the burning bush?”
Former Library Director (prior to Paulette) Lois Van Stipdonk informed everyone “I had the pleasure of hiring Paulette.” She said that Paulette had a great sense of humor and was fun to be with. She also said that Paulette didn’t give gifts; she gave experiences to remember. This was in reference to Paulette’s final Christmas with her family when she took them on a Polar Express excursion.
After being hired by Lois, Paulette spent ten years as Children’s Librarian. Many remembered how she had been the storyteller for their children; now those children are grown and were perhaps reading those same stories to their children. When Lois retired, Paulette became Library Director. She served in that position for another ten years at the library.
Paulette’s children and grandchildren attended the ceremony. Jennifer, her daughter, said that when Paulette died, people didn’t tell her the stories about the shenanigans in the parking structure, the leaky roof, or the bathroom disasters. They told her how Paulette had read to their children and about how she was their library hero. “My mom was about sharing the love of reading and the love of books.” She’d read the latest children’s book aloud to Jennifer. In response to the dedication of the storytime room to her mother, Jennifer said, “This is her legacy. We are humbly here to accept this in her honor.”
The cast bronze plaque outside the storytime room was unveiled by Paulette’s grandchildren. There were plenty of smiles and laughter as the children tore off the paper covering the plaque. At the bottom of the plaque, it reads “Children’s Librarian, Library Director, Great Storyteller, and Lover of Groundhogs.”

Hype Halloween event to be bigger this year

Detroit Zoo employees remove boatloads of trash from the Rouge 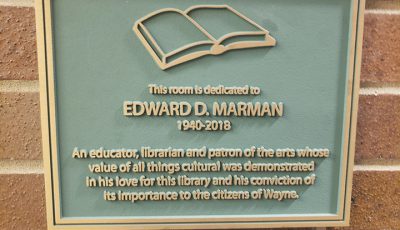