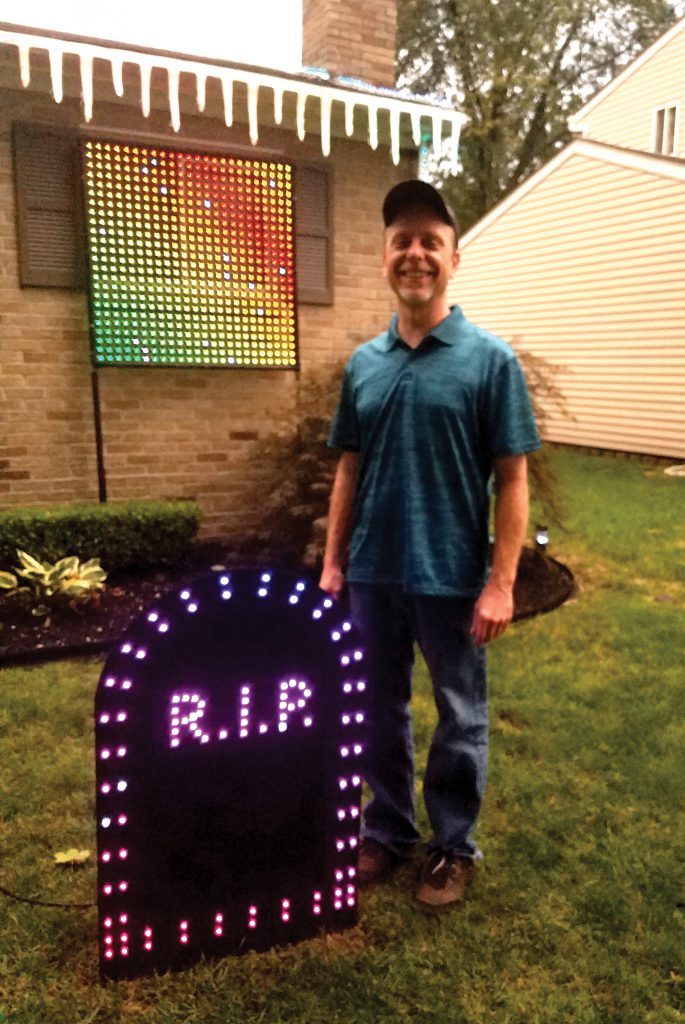 Steve Gush’s house is decked out for Halloween.

By Carolyn Marnon – Take a drive by 34815 Harroun between now and Halloween and see the “Monster Mash” lighting up Wayne residents Steve and Debbie Gush’s house.
“Holidays on Harroun” was started by Steve about 4 years ago. The inspiration for it actually came about 6-8 years ago when Steve’s youngest son showed him a musically decorated house video on YouTube done by Kevin Judd. An electrician by trade, Steve told his son “I can do that!” and set off on the adventure of learning how do to it.
His first animation was a singing Halloween face that he put out for Halloween four years ago. It had an LOR (light o rama) controller. A few months later, Steve had 2 LOR controllers and a pixel controller for a Christmas display.
Although he started with hi-voltage bulbs, he stepped away from that to low voltage bulbs in which every bulb in controlled individually. Every light bulb can be any color Steve wants it to be because each bulb has an RBG (red, blue, green) LED. He can control whether the bulb is on or off, what color it is, and how bright it shines. He says each bulb costs about 18-25 cents. He estimates he currently has about 6000 lights.
Steve also does the light show at Christmas. The great thing about his lighting system is that he doesn’t have to take down all the Halloween lights and put up new Christmas lights. He can use the same ones. All he has to do is change out his props. He wouldn’t want to use tombstones or spiderwebs at Christmas. He will add more lights this winter, and he is hoping to add a mega-tree to that display.
This hobby has got Steve ensnared in its embrace all year. In January, Steve is thinking, thinking, thinking what he wants to do in that new year.
How does he do it? Steve uses a specialty program of free open-source software called X Lights. He imports a picture of his house into the program on his computer, draws lines out where he wants lights, and creates a sequence for the lights. Sounds as simple as pie, right? Well, yes, because a raspberry pi runs the whole show now. For those not familiar with computer programs, a raspberry pi is a tech gadget, not a slice of delicious fruit pie.
It takes Steve 200-300 hours per song to sequence the lights. “I’m a tech nerd,” he says. He wants each sequence to be unique and wants to do a little bit for everybody. He likes to use a mix of classic, old and new music. Although, he says, sequencing a song can take much less time than he puts in, he likes to spend more time “because it’s my show.”
The Halloween display will have 10 musical numbers it will rotate through. “Monster Mash” and that old favorite “Thriller” will be part of the line-up. Steve sets an auto-timer for the show to start and end and then can sit back and enjoy the show. The show starts at dark and after the 10 numbers are done, the display will take a 5-minute intermission before the loop starts again.
It takes Steve about 1 ½ weeks to set up the display in September. “It’s fun.” After Christmas, all the lights come down and are stored for the following year.
The show is set to start at 7:30 p.m. and end at 9:30 p.m. weekdays. The show will end at 10:00 p.m. on weekends. He keeps shorter hours in respect to his neighbors. “No one’s complained yet,” Steve says. He acknowledges that his next-door neighbor will sometimes open his garage and play the FM music station on his stereo. As for the son that introduced him to that lightshow on YouTube? “He wants nothing to do with it,” says Steve. And that’s okay with Steve. His enthusiasm alone will keep powering him along. 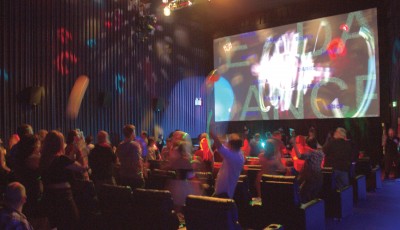