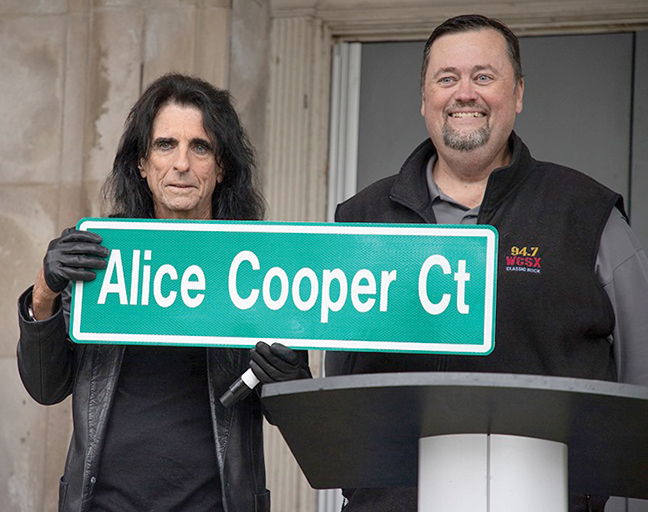 By Sarah Shurge – Summer has ended and “spooky season” is upon us. It’s officially time for cider mills, jack-o-lanterns, pumpkin spice, scary movies, and most importantly, haunted houses.
Michigan gained a new haunted house this month as Eloise Asylum opened a new walkthrough immersive horror experience on Friday, October 1st.
Legendary Detroit rocker and horror enthusiast Alice Cooper was in Westland on Thursday, September 23rd, to see Eloise Asylum’s haunted attractions for himself.
Hundreds of fans stood in the rain to witness and support Cooper as he attended the dedication of Alice Cooper Court, a stretch of road off Michigan Avenue located by the former Eloise Psychiatric Hospital.
Cooper – with his pocket knife in his hand and his wife, Sheryl Goddard next to him – also cut the ribbon to open the multi-million-dollar haunted attraction.
This momentous occasion could not have happened without Owner and Developer John Hambrick, Owner and Operator Matt Hertzog, and the two operations managers Jay Kays and Jim Werner.
The 30,000-square-foot state-of-the-art haunted experience includes scare technology such as Cold Spark Pyrotechnic Stimulators, a Tesla Coil, Advanced Projection Mapping Technologies, and more.
Members of the media got a first look of the immersive haunted experience on September 23rd. It was a cold and rainy afternoon. The sky was an eerie gray creating the perfect atmosphere for a sneak peek of high-tech horror.
Kays led the tour I took part in. As someone who enjoys scary movies and haunted houses, I was thrilled to get a preview of the transformed Eloise Asylum.
Throughout the tour, we walked past cobweb covered couches and chairs facing an old TV playing nothing but static noise. A dark room occasionally lit up by the flashing lights of an electric chair. The glow from an old x-ray film reader box illuminated a wall full of patient files.
There were patients crying on the floor of showers, lurking in the shadows, or yelling and grabbing at you as you walked past. Uniformed doctors and nurses attending to patients with brutal mutilations and burns. Icicles glimmered on the silicone molds of real feet in the freezer section.
Every room had something new and exciting to look at and experience. There was so much that made me stop and stare in amusement and amazement. Everything was so realistic and life-like that at times it was hard to tell what patients were props or real actors.
I tend to be a little desensitized to things sitting in chairs or crouching in corners considering most of the time they are props. So, I walked into Eloise with the same mindset. That quickly changed when doors would slam open or someone would jump out at me and I would yell out in fright. Kays laughed at me every time I did.
The tour ended after we saw about one-third of Eloise Asylum’s new haunted attraction, but I wanted to see more. Parts of the main floor and all of the basement will remain a mystery to me until I buy tickets and return to see the rest.
Kays explained that much of Eloise Asylum’s haunted attraction was designed to mimic the history that happened in this historic building.
In 1839, the Kay Beard Building started as a poor house and farm house. It eventually was developed into an asylum, sanitarium, and hospital. At one point, the Eloise Hospital, Infirmary, and Sanatorium was the largest psychiatric facility in the United States, consisting of 78 buildings over 902 acres.
The Kay Building is one of only five structures that remain of the complex and was used for Wayne County administration until it closed in 2016. But its doors didn’t close officially. The building is said to be haunted and paranormal tours are offered throughout the year.
One of the other buildings still standing on the property is the old commissary, which is currently being used as a shelter for families struggling with homelessness.
Tickets for Eloise Asylum’s new haunted attraction start at $40 for two walk-through attractions and the VIP tickets cost $65 and will give you front of the line privileges. The new walk-through horror experience is expected to last 35-40 minutes.
A portion of the proceeds from the event will be donated to the homeless shelter on campus, so you can scream for a good cause.
Eloise is located at 30712 Michigan Ave in Westland and is open select nights from October 1st through November 7th.
For more information or to buy tickets, visit eloiseasylum.com or call (618) 719-5615.