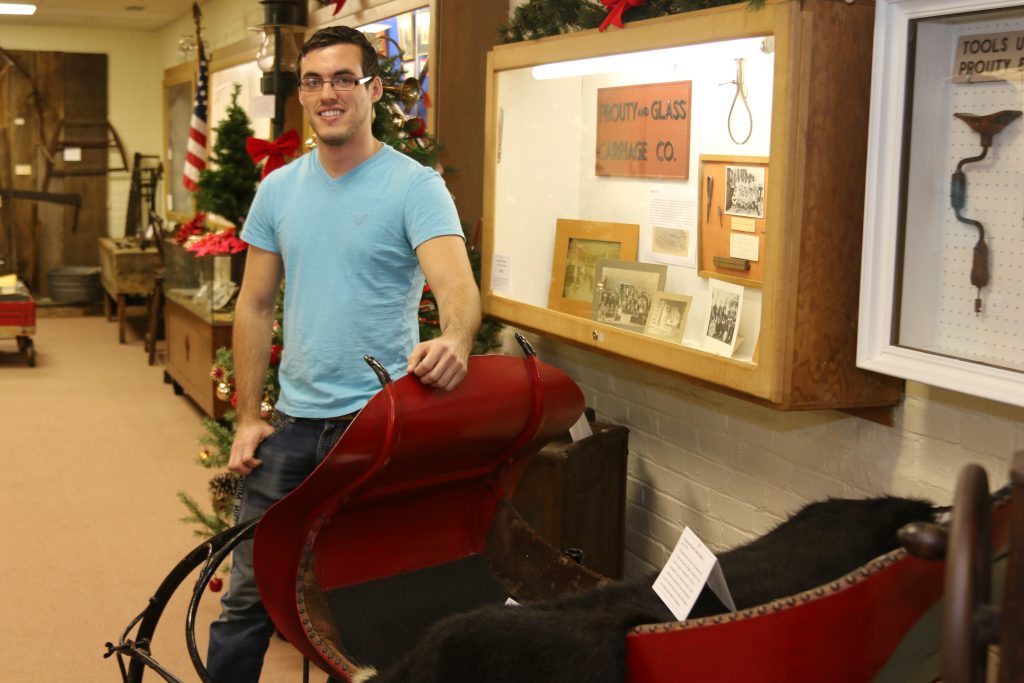 Tyler Moll is a 25 year old graduate from EMU with a Masters Degree in Historic Preservation. Photo by John P. Rhaesa

By Darlene Hawley – Three years ago I wrote an article for this paper about Wayne’s Historical Museum, the oldest public building still standing in Wayne and located in the heart of our community.  At one time Wayne was full of old historic buildings and homes rich in history.  I talked about wishing the walls of these old buildings could talk and tell us the stories of life gone by.  Stories about how people settled here, how they lived, worked, ate, dressed, socialized, played, educated and governed themselves.   But walls can’t talk so we learn about our past in other ways.  We learn from word of mouth, books, newspapers, diaries, letters, objects, council minutes, pictures and historical records. Our Historical Museum holds the keys to our past and answers our questions through the artifacts and archives stored there.
But,  this building was not always a museum.  In the mid 1800’s, when about 800 people lived in this little community, the leaders recognized a need to incorporate into a village.  A charter election was held at the Union Hotel on April 12th, 1869 making our community the “Village of Wayne”.
Councilmen were elected and they met in rented rooms in various buildings to govern the community.  As the Village grew, a need was seen for a building to hold council chambers and house a “lock up” for  “vagrants, drunks and tramps”. (Serious offenders were taken to the County jail in Detroit.)  In 1877, the Village had a population of 1400 people and the Council appointed a building committee to look into building a Village Hall.  A two story building was preferred that was approximately 20 x 36 feet.  After much debate, a brick building was ordered to be built on the Public Square at a cost of $1300.  James R. Lewis of Detroit won the bid.  It featured a French Mansard style roof which was popular in Detroit at that time.  The first meeting was held in the new building on November 19th, 1878.  The building was used for both Village of Wayne and Nankin Township meetings. All elections were held there,  the Justice of the peace rented space there, and the Village Band stored their instruments there.  It was the center of all Village activities and all important community questions were debated and decided there.  Public meetings were held in the Village Hall, official proclamations made there and momentous occasions officially recognized and celebrated there.  It was a beautiful building and the town was proud of it.
Over the years improvements were made to this building.  Gas lights were installed in 1902,  and electric lights in 1912.  In 1916 an addition was put on the back to house fire apparatus so the building could be used as a fire house.  In 1928 it housed a new  American LaFrance  fire truck. In 1929 an addition was put on the North side of the building with doors opening onto Monroe Street.
In 1926 our Police Department was organized and their headquarters were in the Village Hall where they could make use of “lock ups” or jail cells in the basement.  In the 1950’s the Village Hall became home to the Chamber of Commerce and the Junior Achievement.  In 1964, the City Council named the old Village Hall the Wayne Historical Museum.  The Historical Society began moving their collections into the building and setting up exhibits.  The City appointed a Historical Commission in 1969.   In 1987 an addition was added to the South side of the building to make room for historical artifacts and displays and an office added for the museum manager.
Our museum has had many caretakers over the years.  The City appointed managers who  loved history and recognized the importance of preserving our artifacts and archives.  These items are our link to our past and our story.  Mildred Hanchett, Hank Goudy, Virginia Presson and Richard Story were managers of the museum who grew up in Wayne and whose families were part of the history of our community.  (Virginia’s daughter Val Latzman wrote a wonderful book on Wayne with many photographs.)  The Wayne Historical Society has always been an important part of the museum  giving support in many ways.  Matt Miller, our City Clerk,  grew up in Wayne and has a great deal of knowledge of our community history.  His positions in our City government have had him overseeing the museum and the Historical Commission as part of his responsibilities.
As we prepare to celebrate the beginning of a New Year, we pause to look back and realize how many things  have changed.  Nothing stays the same.  This is true of our museum at this time in history.  Several years ago a group of leaders from our City applied to the State for acceptance into their “Main Street”  program which supports communities in revitalizing their downtown areas.  We were selected to participate.   When looking for housing for this program and its manager, it was decided to use the museum and its office.  This would make it possible to have our museum open to the public more hours per week.  Main Street director Lindsey  Wooten Dotson was instrumental in suggesting we look for professional help with our museum.  She contacted Eastern Michigan University where a  Historical Preservation Curriculum was offered and asked about locating a grad student who might be interested in working in our museum.  Last April Tyler Moll began work and in a few short months has made some amazing changes. 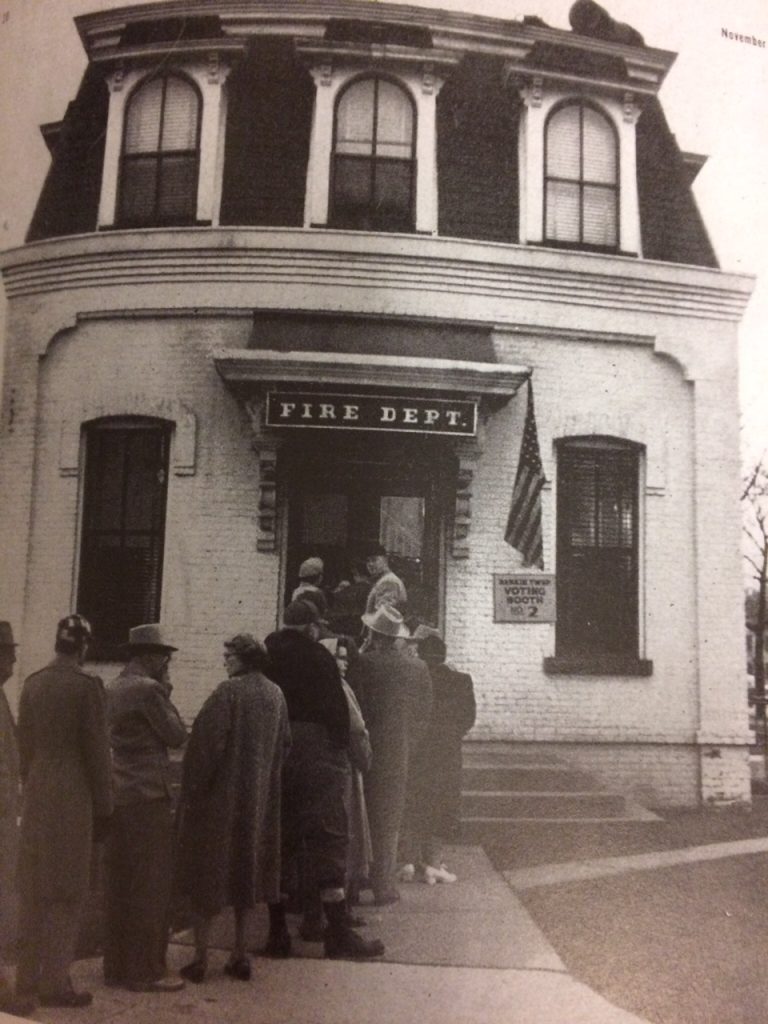 Residents line up to vote at the old Fire Department seen in Life magazine in 1952 .

Tyler is a 25 year old graduate from EMU with a Masters Degree in Historic Preservation.  He brings a great deal of knowledge, expertise and enthusiasm to Wayne’s museum.  He is from Ohio, where his family still lives, but resides in Ypsilanti.  He grew up spending time on his grandparents property which contains a number of historic buildings built in the mid to late 1800’s.  He has helped his family research and work on these buildings while working on his degree.  Along with a number of dedicated volunteers from the Historical Society, Tyler has made some exciting changes to our museum.   He started working in the office archives, organizing and sorting documents and books.  He learned a great deal of Wayne’s history as he worked at rehousing material in new acid free folders and boxes purchased for him by the Historical Society.  Everything in the  office (180 feet of shelving and 13 file cabinets) got new labels and a good cleaning.  He and his volunteers sorted through tens of thousands of pieces of paper to achieve this task.  In September he began going through the museum displays, cleaning, sorting and researching objects.  This involved finding the objects  accession number and matching that to the paper work that was filled out when the object was donated.  Upon checking the original paperwork, he could read where the object came from, who donated it and if it was related in any way to Wayne.  If an object has no connection to Wayne it is put in storage until its fate is decided.  Using this method , the display was cleared of clutter and simplified.  Next, the museum was organized into chronological order going clockwise outside the rooms.  It begins with the early settlement of Wayne and goes through farming, early industries, later businesses and events and brings us to the 60’s and 70’s.   It will take more time and effort to bring the displays to the present.
The new arrangement of artifacts brought the need for new signage to tell what the objects are and why they are important. Tyler designed a new logo and informational card that has been placed on or near most objects telling of their history.  This required quite a bit of research but gives a professional appearance to the displays.  Space was left for display boards which will be professionally designed and printed.   A new program called “Adopt a Display” is now running where a family or business can adopt a display board and have their name or logo printed on it.  The cost ranges from $45 to $160.
Another addition to the museum is the new welcome desk and gift shop at the main entrance.  Display cases were cleaned and painted and now house an expanded selection of Wayne photos and local history books.
Tyler has cleaned and organized the basement and is now tackling the second floor which has always been used for storage of objects not on display.  This will be a big undertaking for him and his volunteers but he likes the challenge and sees a little progress already as they clean, sort and research.
Tyler enjoys his work in our museum and has opted to renew his internship so that he can see the completion of what he started here.  He has also taken on the job of the Wayne Historical Society Facebook page and writes weekly historical blurbs and uploads pictures from our archives.   We are very fortunate to have Tyler working in our museum and bringing it up to date.  WHAT’S OLD IS NEW AGAIN!!!  If you have visited the museum in the past, you have to come back and have a look at all of the changes!!!! If you have never visited the museum, please make a New Years resolution to come visit and learn more about the history  of your community. You will be glad you did!!!!  The museum is open Wednesdays from 10:00 a.m. to 7:00 p.m. and Thursdays from 10:00 a.m. to 4:00 p.m. or by appointment.  Call 734-722-0113.  If you would like to volunteer,  give them a call.