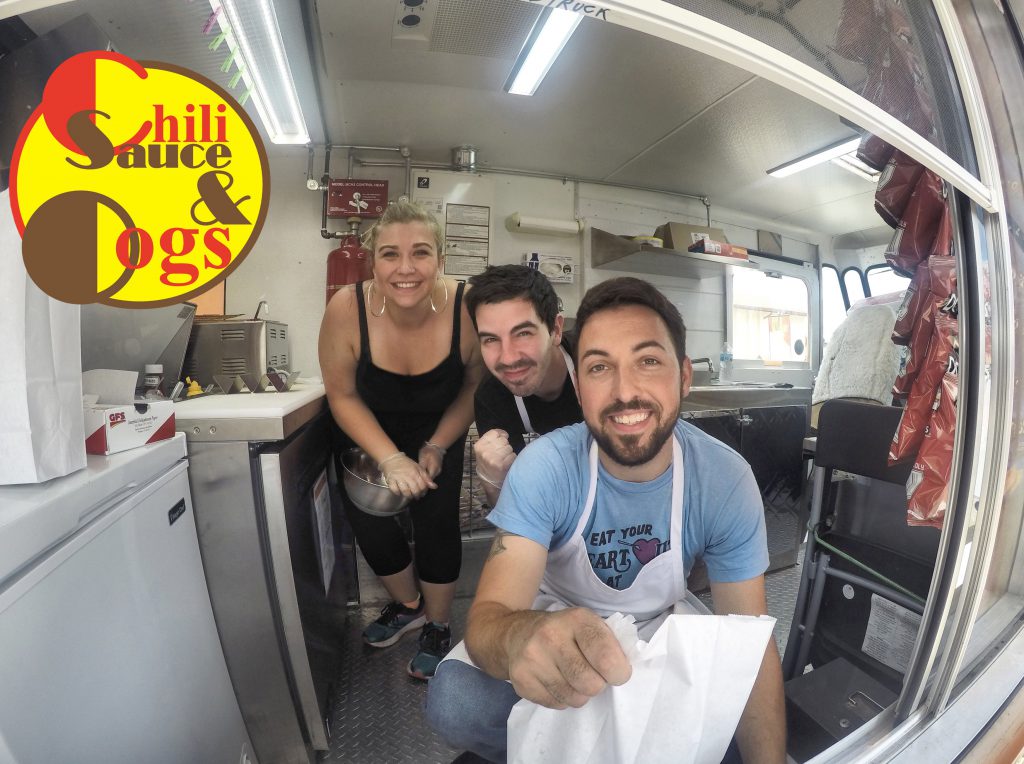 Erica Welch, Trevor Smith and Benjamin Welch would love for you to visit Chili Sauce and Dogs.

By Carolyn Marnon – “I’m not a store shelf sale to make money. I’m selling you something I created that I put my heart and soul into,” says Benjamin Welch, owner of Chili Sauce and Dogs, a local food truck.
“It’s truly an art.”
Who is Benjamin Welch? Benjamin is a 2003 graduate of Wayne Memorial High School who currently resides in Dearborn. A real estate agent for the past 12 years, he is now pursuing his food truck fantasy on the side. He says he has always been “salesy,” selling baseball cards and matchbox cards while he was in school. He went to college briefly before starting an industrial pressure washing business with a former Wayne police officer. He learned on the go, studying industry, and eventually went back to school to get his associate’s degree in marketing.
“I understand the passion behind what a chef does,” says Benjamin. However, “I’m not a chef. I am a cook.” He had the idea to make a better chili dog or a version of a chili dog that “gave someone an experience while they were eating it.” Benjamin prides himself on selling experiences. He says this year’s experience will be different from last year’s experience.
First came the sauce. The chili sauce is homemade. “No one’s tasted it before,” says Benjamin. He spent a lot of time in the kitchen tweaking the levels of ingredients he was using.
A lot goes into starting a food truck business. While sitting at home, he started sketching a logo. For some reason, he wanted to use Ray’s in his business name, maybe Ray’s Greatest Tasting Chili Dogs. He started wondering, though, if that name would express what he wanted to say. He asked himself questions. And then the name came to him! Once those words were in his head, he says he wouldn’t tell anyone until he had it trademarked; he was that passionate about the name.
Next, he had to decide whether he wanted a brick and mortar business, a food truck, or a concession trailer. He decided that the food truck was the more attractive choice what with the Detroit movement in food truck rallies. 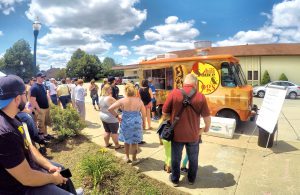 Chilli Sauce and Dogs was a popular stop during Downtown Days. Photo by Andrew Khelif.

“I discovered my truck on Craigslist on April 14, 2016 at 11:42 P.M; while sitting on the john. I accidentally typed “concession truck” instead of “concession trailer” and found this beauty. It was posted by a farmer in Morenci, Michigan who acquired it by trading a Kubota with a guy from Ohio. The Ohio man and his brother converted this old truck into a food stand by the name of ‘Scott Concessions.’ These two guys crafted custom wood fixtures, installed an old Kohler generator, and ran through the mechanics of this 1966 Ford P350. After the Ohio man’s brother passed away he lost interest in the business.
Many alterations had to take place because of health department regulations but the energy of these two men live on in this classic.” This is how Benjamin Welch describes the acquisition of his first food truck on his website www.chilisauceanddogs.com.
Having a food truck is not for the weak-hearted. Used equipment can break down. He says he has had problems with the generator breaking down, with contractors and with information gathering. He went through three contactors before he was able to get his truck painted. He happened to stumble upon Tarek at Wayne Auto Collision who saw his vision and was able to get the truck painted the way Benjamin wanted.
Benjamin found that people in the food truck industry were not helpful when it came to sharing information about running a food truck. His plan was to get experience on another food truck so he could get acclimated to the equipment and how to run a food truck. No one would help him. He ended up going “undercover” at Sal’s Chicago Classics in Trenton under the pretense of doing a marketing report. He learned how to clean a deep fryer and how to fire up a flat-top grill, among other things and says, “It was a huge help.” He also says the owner was a super, cool guy.
Chili Sauce and Dogs made their Grand Opening debut at Wayne’s Downtown Days/US 12 Cruise last summer outside the Wayne Historical Museum. Benjamin says the chili dogs were good, but they weren’t great yet. It took him two-three months more to get to the point he would call them great.
The food served is halal. Benjamin explained this means a more humane process is used in processing animals. He says he tried non-halal but was disgusted by the smell of blood.
The food truck’s busiest event so far was during Taylor’s Winterfest last November. Benjamin says he prayed, “God-hit us hard!” before the event. He says he wanted the pressure and the opportunity to sweat so he could work out any kinks in his system. His prayers were answered with a solid line for three continuous hours. Although the logo and the design on the truck were done by Benjamin, as well as the early marketing pieces, he has been blessed to make the acquaintance of a young man in Illinois who is now his intern. While attending a Board of Realtors meeting, he met a gentleman whose nephew wanted to start his own marketing businessChili Sauce and Dogs also sells deep-fried cornbread nuggets, something you won’t find anywhere else. Benjamin has a trademark pending on it. He wanted to serve cornbread with his dogs and the idea evolved into deep frying it into a nugget. He says it’s like a hush puppy, but it isn’t one. Another menu item is Saucy Chips where the chili sauce is served over tortilla chips. The best seller, according to Benjamin, is All Jacked Up. It consists of gardenia peppers, shredded cheddar, chili sauce, onions and mustard on a hot dog. His wife, Erica, helps on the weekends. He also gets help from former Wayne resident Trevor Smith and current resident Kay Eaves.
The best advice he can offer others who want to pursue their food truck dream is “be thoughtful of others who are trying to come up in the same manner. Want others to do well.” This could certainly pertain to any other business as well.
You can find the truck at its regular spot in front of Airlines Parking in Romulus every Friday.
The mission of Chili Sauce and Dogs is to be the face of Detroit’s food trucks, continue to grow and never lose sight of quality, service and flavor. If you want to find out other places where Chili Sauce and Dogs will be, visit their website or their Facebook page. They post the schedule for the week every Sunday.