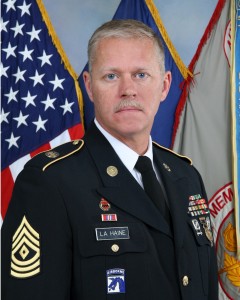 By Carolyn Marnon – The U.S. Army has honored Wayne Memorial High School’s JROTC instructor, First Sgt. Steven LaHaine. He has earned the Gold Instructor Award and the Senior Army Instructor of the Year Award.
LaHaine’s commitment to excellence has motivated his cadets to excel in community service learning projects, competitions and overall program success. He was recognized as a role model for all other JROTC instructors across the nation. The Wayne Memorial High School JROTC program has been nationally ranked for many years.  The students and staff in the Zebra Battalion exemplify Wayne Pride.
The Gold Instructor Award was received for demonstrating the highest degree of excellence as a JROTC Instructor. LaHaine was recognized for his ability to integrate and apply the techniques and standards necessary to develop a successful program.
He was selected as the Brigade Senior Army Instructor of the Year for 2014-15 for his professionalism, technical proficiency, dedication to duty, and service to the students at Wayne Memorial High School. His overall success has established Wayne Memorial High school JROTC as one of the elite programs in the nation. LaHaine is a leader for all JROTC instructors in the 7th Brigade.
LaHaine has been with the Zebra Battalion JROTC since it was formed on July 1, 2004.  Prior to that, he was the Senior Army Instructor for Finney High School in Detroit.
“My success as an instructor is due to my Army training.  I was taught the Seven Army values of loyalty, duty, respect, selfless service, honor, integrity and personal courage as a young soldier at Fort Sill, OK.  Adherence to these values served me well throughout my Army career and have transferred over to my civilian career.  These values help me guide our young cadets to be better citizens, graduate from high school, and become successful adults,” said LaHaine.
First Sgt. LaHaine will be recognized at the Sept. 21 Board of Education meeting.