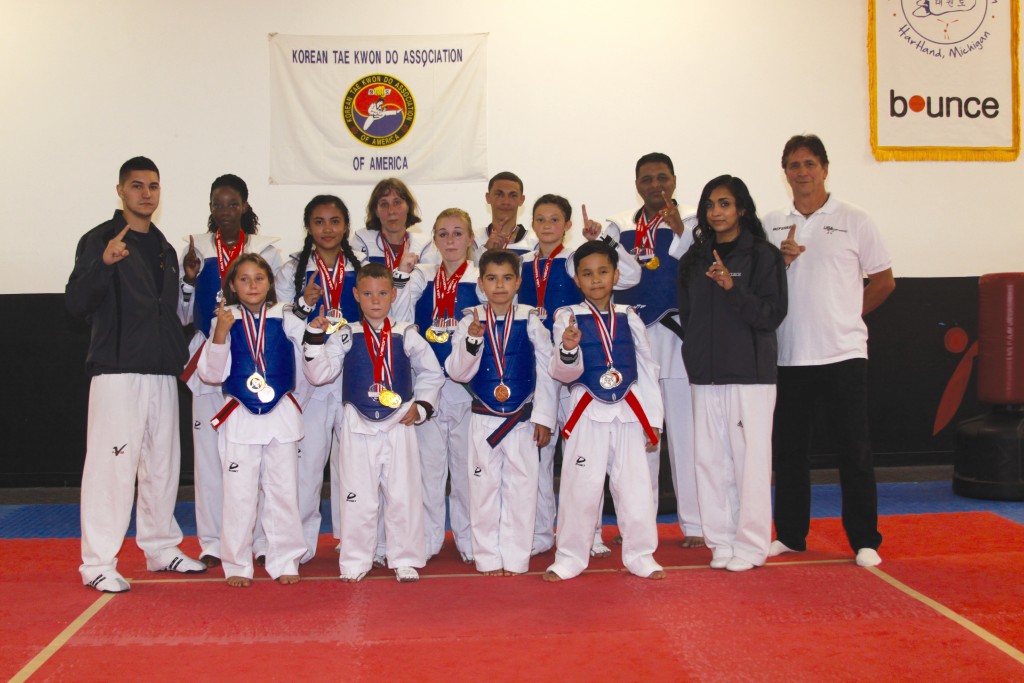 By Carolyn Marnon – At the United States of America Tae Kwon Do National Championships held last July in Austin, TX, the KICKS competition team brought home 10 medals. From the youngest team member (aged 7) to the oldest (aged 40), the team of state competition medal winners had an outstanding season.
Thirteen team members had qualified at the state Tae Kwon Do competition in March to attend Nationals.  Of those, 8 members added at least one national medal to their collection.  Alexander Weinberg, age 7, earned bronze as a blue belt in his age/rank/weight category. Aubrey Evans, age 10, won bronze in her blue belt category. Maverick Kelly, age 16, won a gold as a red belt. Cassandra Rigor, age 17, won gold as a green belt.  Briahna Kitchen, age 18, won 2 golds as a blue belt.  Julia Saferian, age 19, won a gold and a silver as a yellow belt.  Gautham Thyagarajan, age 34, won a gold and a bronze as a red belt. Lisa Johnson, age 40, won gold as a red belt.  That’s a total of 7 gold, 1 silver and 3 bronze.
The team is taught by 5th degree black belt Master Mike Rose, head coach and 4th degree black belt Master Imali Kent, associate coach.
The competition is broken down into the different age, rank and weight categories.  An individual competes against someone in their same categories.  There are two areas of competition-sparring and forms.  Forms is a defined pattern of defense-and-attack motions. Sparring can be considered reflexive responses to an unplanned attack.  Points are given for punching the body, kicking the body, spin kicking the body and kicking the head (with a light touch).  There are sensors in the chest protectors that tally points to the chest while referees on the sidelines tally the points for the other kicks and punches.
The Austin Nationals lasted 7 days.  There were 18 rings in which competitions were held all day.  The referees of the event worked 10-14 hour days.
2015 was one of the largest nationals with over 5000 competitors from all over the US. To qualify for Nationals, one must place at the state competition.
The team is at KICKS 4-5 times a week training.  One day they work on strength and conditioning, the next is targets and the third day is for hogu drills (with the chest protector on). The other two days they work on their moves. There is a weight room available for training also. Competition season begins in September and culminates with Nationals in July.  Team members are allowed to train less in August before picking up again for the next season.  Tae Kwon Do is an amateur sport.
Although each team member is responsible for their own expenses to attend Nationals, the team has held bottle drives, a pancake breakfast, a car wash, and sold Little Caesar’s pizza kits to help defray costs.
Grandmaster Ron Rose, owner of KICKS, is a 9th degree black belt. To become a Grandmaster, he had to attain 7th degree black belt and be the head of a Tae Kwon Do organization.  In 1977, he opened KICKS Tae Kwon Do and Fitness Center.  It has been housed in several locations until it came to its current location at 35004 W.  Michigan Ave in January 2000. Most of Ron’s time is involved in refereeing.  He does referee seminars all over the country. He has also hosted the 2008 Nationals at Ford Field in Detroit.
Other members who qualified for Nationals but did not place are 2nd degree black belt David Clark II, age 16, red belt Bianca Rosado-Riffle, age 9, red belt Tina Johnson (daughter of Lisa Johnson), age 9, blue belt Jonathan Floare, age 9 and blue belt Josh Rigor, age 9.