By Carolyn Marnon – After a stressful move from New York City into their new country home, Lauren and Jerry unwind with their closest friend Megan in the dimly lit cottage. The calm only lasts so long. Megan discovers an ashen little boy in the yard, shivering and alone…or so they think. The three friends act quickly to protect this boy from a frightening man and his gang of drifters who seem intent on getting this child.
The cops won’t come, and the men don’t scare easily. It becomes utterly clear that in the country you are on your own.
The only thing that separates them from horror is a dirty pane of glass or a creaking wooden door. But how long can you keep the wolves out when their prey lies within?
The friends’ resilient city mentalities cannot stave off what lingers in the darkness, will not stop the evil at their door. How could they possibly be prepared for what’s in the woods?
(from www.whatsinthewoodsmovie-.com)
The daughter of retired Wayne Police Chief John Colligan and retired Schweitzer Elementary school teacher Pat Colligan dares you to find out. 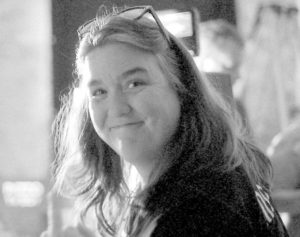