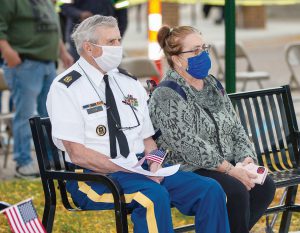 Over $100,000 was raised over the last four years to bring this dream to honor our military veterans to life. The memorial is accessible year-round. Three benches look towards the memorial to provide space for contemplation. Several parking spaces face the memorial for those veterans who are unable or do not wish to get out of their vehicle. It’s a place where veterans can ponder thoughts they can never share with anyone else.
As the Pledge of Allegiance was recited on a cool autumn day, occasional raindrops fell from the sky, like teardrops for all who gave their lives during their military service.
Wayne Mayor John Rhaesa spoke about the courage, pride, determination, selflessness, dedication and integrity of those who have served this country.
Mayor Pro-Tem Tom Porter, who is a veteran himself, was unable to be at the ceremony as he is fighting his own battle, a private one, with cancer. He did send a message that was read saying in part “It’s a place to say thank you to all who served.”
Pastor Seth McDonald of Hill Crest Bible Church praised the memorial as a place where future generations will know of the sacrifices made before them.
Retired Air Force Colonel Charles L. Cone, the guest speaker, approached the podium to share his thoughts. 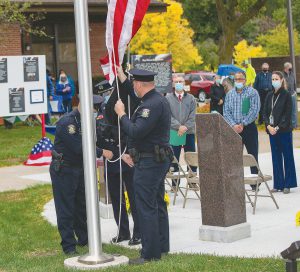 “Most of us can hardly move around!” he chuckled to the crowd. Col. Cone wanted to be a naval aviator when he was growing up; his passion was flying. He raised and sold beans to earn the money needed for flying lessons. He grew up and became a Naval Aviator. He later transferred his commission to the Air Force in time to serve in the Korean War. He completed his military tour in Vietnam and retired in 1973. He became an active flight instructor.
In speaking of his service, he choked up and paused for a moment as he shared how he gets a lump in his throat and a tear in his eye whenever he hears The Star-Spangled Banner and Taps. Taps means a vet has gone to glory, he said. He told the crowd that we cannot accept the burning and disrespect of our flag. Men and women of the armed services are there to protect you, he said. Service members and vets have taken on special responsibilities to maintain our way of life.
Col. Cone remembered eleven of his crew members who were killed in a plane crash as they were preparing to go on leave. One of those killed was his roommate. He had experiences where he had to inform a wife of the death of her husband, and then had to visit the man’s parents to inform them. He knew a World War II paratrooper who had a newborn son. He had made jumps in Africa, Italy, Normandy and then was killed in Belgium. He never “met” his son. 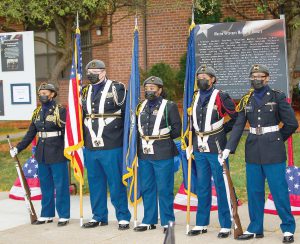 Wayne Memorial High School JROTC before presenting of the Colors.

In an ironic twist, as soon as Col. Cone was done speaking, the clouds opened up and rain started coming down over the gathered crowd.
Wayne Police Officer and veteran Jordan Arndt, Wayne Police Officer and veteran Joshua Priebe, and Wayne Fire Department and veteran Captain Dave Wylie raised the flags, the American flag and the POW/MIA flag, over the Veterans Memorial to close the ceremony.
The Wayne Memorial High School Zebra Marching Band played an American medley of songs as the skies opened up and a downpour beg 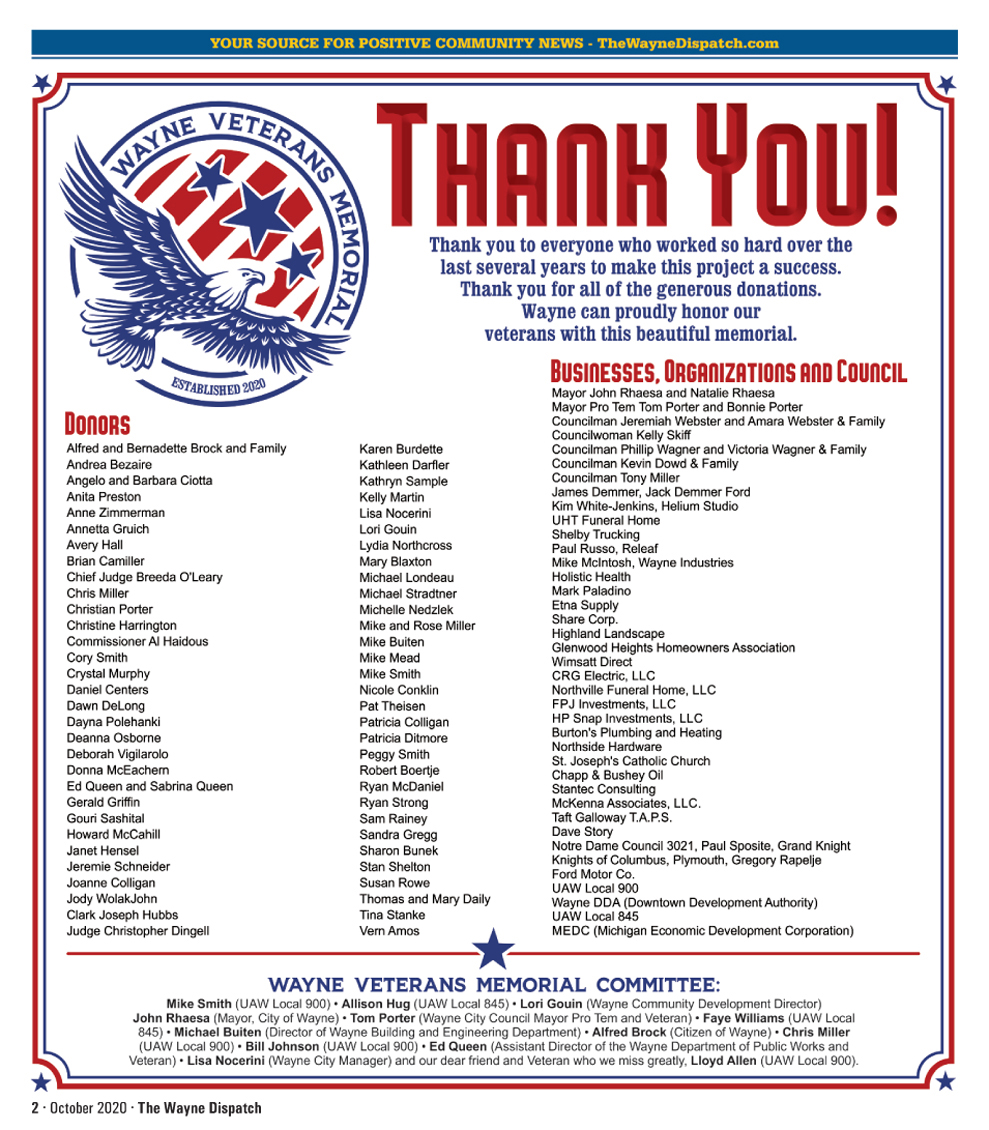 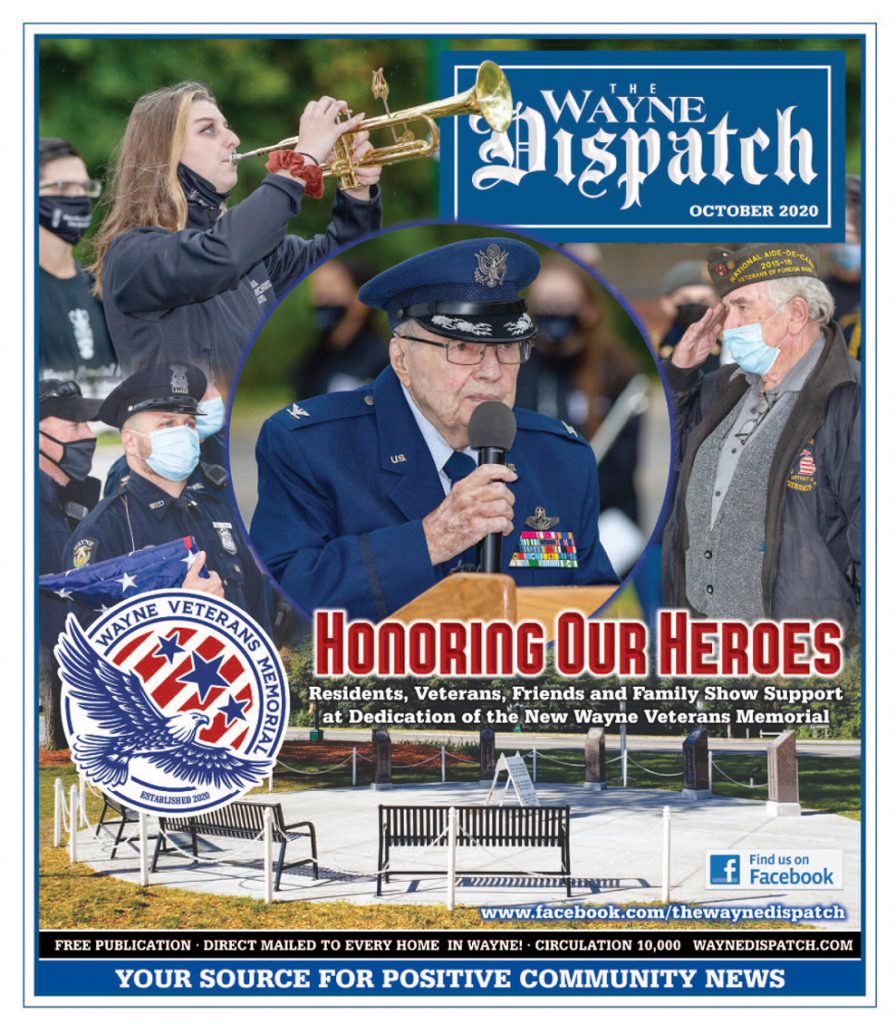 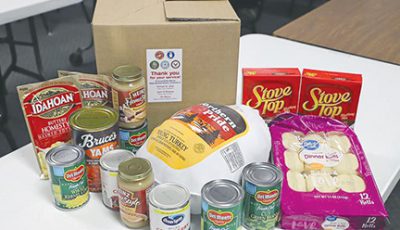