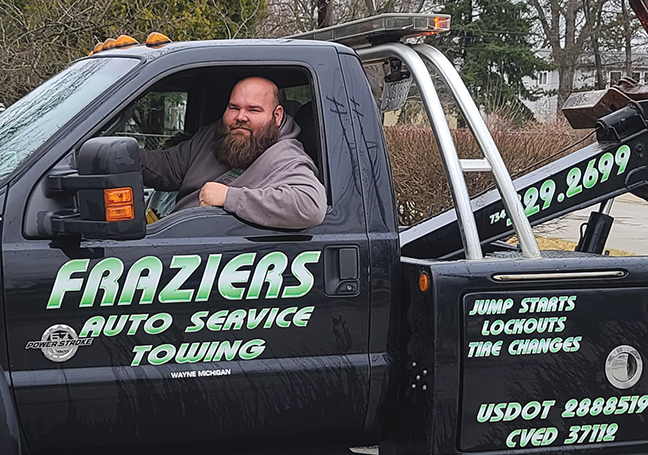 By Sarah Shurge – It happened December 2, 2021 at 2 p.m., Jeff Frazier, owner of Frazier’s Auto Service Towing, was stuck at home with COVID, when his cousin Larry Frazier came to his house to let him know the Wayne Police Department called.
The police department needs to have a relationship with a towing service because there are many reasons a vehicle might need to be towed: when there are traffic crashes and a disabled vehicle needs to be towed, when an arrest is made and the vehicle needs to be towed, etc.
“The Wayne Police Department had set a longstanding relationship with Howard’s Towing, longer than I’ve worked here, I think 30 plus years,” said Wayne Police Chief Ryan Strong at the city council meeting on March 15, 2022.
However, Howard’s Towing unexpectedly discontinued towing the police department’s vehicles in early December 2021.
“Frazier’s Towing is owned by the son of the original owner of Howard’s Towing and was able to step in and start towing vehicles for the police with essentially an hour’s notice,” said Chief Strong at the meeting.
Frazier recalled the day of the phone call in early December, saying within 20 minutes he (even with COVID) had all the paperwork faxed to the police department and was ready for them.
“Timing is the number one thing,” said Frazier. “To get to the scene as fast as possible.”
Frazier’s Auto Service Towing spells F.A.S.T. for a reason.
“That’s actually how I came up with the name when I started the business. I want us to be the fastest. I want to get there fast, to get you off the road fast, and get you situated as fast as possible,” said Frazier.
At the council meeting, Wayne Mayor John Rhaesa made a comment about Frazier’s Towing services. “I just wanted to say, I’ve had experience with Frazier towing; a couple times I had to get my vehicle towed and both times, very fast,” said Mayor Rhaesa. “I actually had to get up there, get it towed to another Wayne business, and had everything done within an hour. They did an incredible job working for us.”
Frazier started Frazier’s Towing in 2014, about two years after his dad passed away. His father, Howard Frazier, was the original owner of Howard’s Towing. So Frazier has been involved with towing for around 20 years.
“I was running around that yard since I was 10 years old, if not younger. I grew up in that yard and riding in tow trucks with my dad. There’s five of us boys, and we all took turns on who went on the tows,” said Frazier.
Almost all of the Frazier sons are still involved in towing. Frazier’s brothers Howard Frazier and Nathan Frazier both work at his shop. Nathan tows and Howard is a heavy mechanic. While his other brother Jimmy Frazier works at a different towing company, but the brothers do business a lot.
Frazier’s cousin Larry worked for Frazier’s father, Howard, since he was 15 years old and now is the operating manager at Frazier’s Towing.
Even though Frazier grew up around towing, he originally didn’t want to be in the towing business when he got older.
“I never wanted to be a tow truck driver,” said Frazier with a laugh.
Frazier had a career in sales. He worked in direct marketing for Comcast for 10 years, but then his father passed away and it brought him back into the towing world.
“It wasn’t an easy start, but it was a fast decision. I knew getting the property and following the family business was what I needed to do,” said Frazier. “We basically started from scratch. I bought a truck for $5,000 and drove it until it died. I wanted to keep the same morals of the company my dad had and respect for the customers.”
Frazier always asks customers for Google reviews and claims that’s basically how the business got built.
“It was hard to get my name out there,” said Frazier. “I knew I always wanted to keep the business within the city. Wayne used to be a really strong city. So it’s important for people in Wayne to start using businesses in Wayne.”
To encourage local business, Frazier offers resident discounts: where he doesn’t charge mileage. Wayne residents just get a flat rate tow.
“People use motor clubs like Allstate, AAA, Roadside, and they charge you monthly but they leave you sitting for three to four hours. We will never leave you sitting there that long,” said Frazier. “I don’t think I’ve ever had a tow over 45 minutes and that’s when I was fully booked up.”
On March 15th, Chief Strong and Frazier attended the city council meeting in hopes of getting a contract approved.
“They’ve done a great job for us since the beginning of December. We’ve had no complaints,” said Chief Strong at the meeting. “My command officers said they get the vehicles on scene quickly, they can handle complicated tows, they’re polite and professional with citizens.”
The board approved the contract between the police department and Frazier’s Towing.
“It was a known thing that I always wanted to go after this. We were very passionate about getting the towing. It was a huge thing for us,” said Frazier. “I built this company for this. I’m very appreciative to the city, the police department, and the council for this opportunity.”
Frazier and Chief Strong weren’t the only ones excited about this approval.
“I know that he [Frazier] has a passion for the community. He’s also been very involved in events in our community, so I think it’s a great win for our community when you can use a Wayne resident’s business and it helps them build their business and work with their community. So I support this wholeheartedly,” said Mayor Rhaesa.