Gave up New York and the world for Wayne 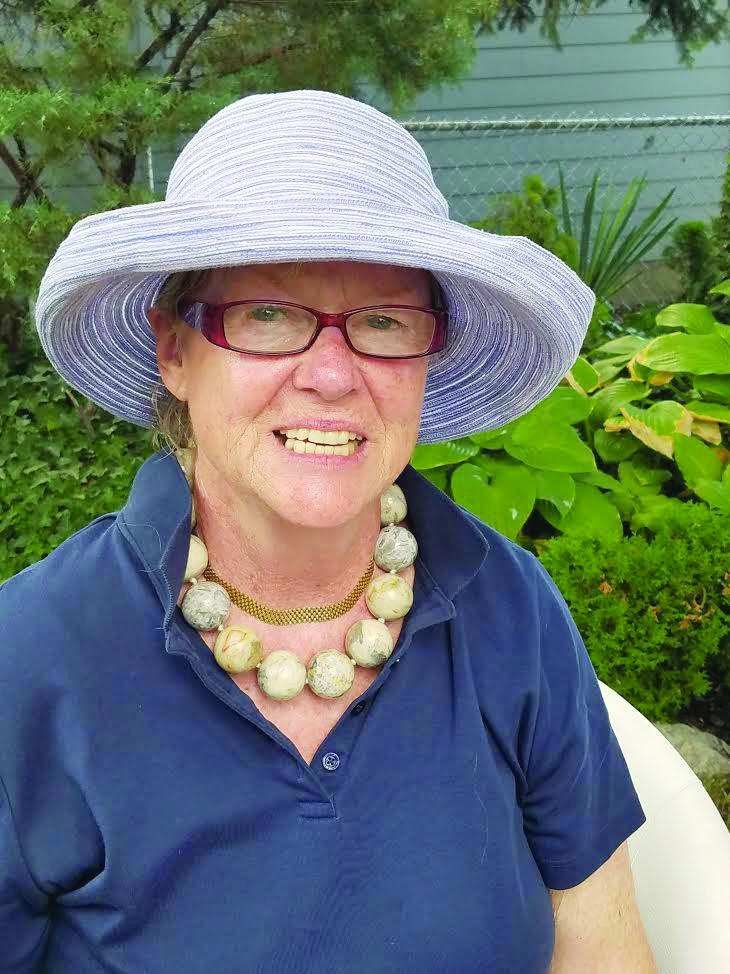 JoAnn Hanson in her garden.

By Carolyn Marnon – Who gives up their jet-setter life to settle down in a quiet neighborhood in Wayne?  Jo Ann Hanson did.  She had an apartment in New York City and owned a rental property on Long Island.  She flew “up, up and away” up until ten years ago when she retired after forty years with TWA.
Jo Ann says she had been burned when she was young and had a visible scar.  She didn’t think she could ever be a flight attendant.   A friend of her mother got her an interview at TWA, the Airline to the Stars owned by Howard Hughes, when she was 17 or 18 to become a ticket agent.  At that time, one did not have to go to airline school. She worked as a ticket agent until she was 20.  TWA didn’t think her scar was that bad and allowed her to fly, so she became a Hostess. That’s what flight attendants were called back then.
Since Jo Ann grew up in Illinois and attended a French convent school in Evanston, her French education qualified her to work international flights. She had always wanted to fly to Europe, Africa, Asia and South America. Now she was living her dream.  Back in those days, hostesses’ lipstick had to match the TWA logo, they had to wear girdles, they couldn’t be married or have children, they had to maintain a certain weight (not being able to gain five pounds over their hiring weight) and their contract specified they had to quit at age 35. When she retired in 2000, a flight attendant, as they were now called, could be married, gay, have children and/or be a single parent.  Equal rights meant that everyone was allowed to be employed.
The first twenty years of her career were the best, she said. Planes had silverware and china. She could fly anywhere as a passenger as long as she got there 15 minutes ahead of departure.  Things changed after the 2001 hijackings.
Based in New York, JoAnn had an apartment across from the United Nations.  She was thrilled to get out of Chicago and be in the city that never sleeps.
In 1986, she met her fiancé in Cairo.  She lived with him in Singapore enjoying the benefits of his job’s expense account.  He also had a home in Houston.  She would fly for ten days and then have two weeks off to enjoy all that Singapore had to offer. She said it was full of culture then; now it is all modern like Miami is.  Jo Ann also says, “I had so many wonderful friends” in Miami. According to Jo Ann, all the ethnicity that made Singapore so fascinating has disappeared. She recalls the houseboy they had; he had parties when they were gone.  Sure beats the housecleaning, shopping and errands he had to do when they were there. Alas, the relationship with the fiancé didn’t last.
She lived in Paris, the City of Lights, for less than a year. She had become friends with a male pilot with whom she exchanged apartments for that period of time.  She says Paris is so much like New York.
A female friend from Chicago had a cottage in Cotswold that she had inherited when her aunt died.  The cottage was built in the 1700s.  The friend needed help, so Jo Ann flew in to live there for a while.  She says the house needed lots of TLC (tender loving care), but the “boy” next door made it more interesting.
All of her living adventures happened because she was with people.  She’d spend a month in New Zealand or Africa then go back to work flying, flying, flying, before she was ready to drop anchor again.  At one time, she visited 21 cities in 14 days.
Her favorite spot has been Nairobi, the largest city in Kenya. She went to Africa at least once every year.  She had three months of vacation each year with her seniority and the ability to trade flights.
So exactly how did this lady come to land in Wayne?  One week, Jo Ann had a free pass to spend a week with her sister who lives in Westland.  She loved coming to town to help her sister open and close her garden each year.  She loves gardening.  She’s even been a volunteer in New York City’s Central Park.  One May, the sisters were driving around in Wayne and happened upon a house for sale that Jo Ann thought was nice.  When she came back to help her sister close her garden in September, she says the house was still for sale. “I was hearing angels sing.” Anyone who knows Jo Ann knows she has a great sense of humor and a way with words.
Other than her sister, Jo Ann knew no one in the area.  Jo Ann doesn’t drive; she’s never had a need to do so.  She has always gotten rides from friends or rides the bus or other mass transit.  She can ride elephants and camels and she can fly, she says with a laugh. 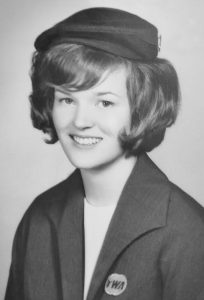 When it was time to retire, she looked all over the world for a place to land: Costa Rica, Mexico, Europe, Latin America, Lisbon, Paris, England and Key West. None held the allure that the Tudor house in Wayne did. She says Wayne is the “most exotic place I’ve ever lived.” She doesn’t understand why the car rules.  “The rest of the world doesn’t live this way,” she says referring to the reliance on cars. She only goes to the store once or twice a month, either when a friend drives her or she takes the bus or Uber.
Now that she has settled down in what to her is exotic Wayne, she likes to garden, cook and take care of her house.  She is active in the Wayne Garden Club, currently acting as co-president. She cooks every day, mostly fish.
She likes unusual food; she is used to having her steak “blue.”  She says most people hurry through their meals and don’t enjoy it.  She thinks food should be an evening “event” like it is in other parts of the world.
“The people were the surprise, I think. They are just the most wonderful on earth,” says Jo Ann when asked what she likes most about living in Wayne. The people, indeed.

Her many angles make her a perfect choice