Her many angles make her a perfect choice 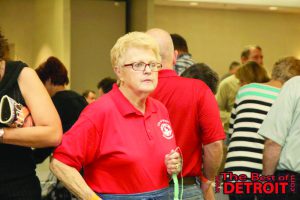 By Carolyn Marnon – Beverly Campbell has many different facets. These facets all come together to form this wonderful woman who was recently named Wayne’s 22nd Annual Diamond of the Community.  This award recognizes a Wayne resident who is over 70 and actively volunteering in the community. Bev will be recognized at a dinner in her honor. The award is sponsored by Dairy Queen’s owners, Mike and Jennifer Petrou.
Bev doesn’t volunteer for just one organization.  Oh no!  She volunteers for a handful: Wayne Goodfellows, Wayne Civitans, Wayne Main Street, and the First Congregational Church right now.  She’s volunteered for Wayne Wheelfest, the Jaycees and as a Wayne Business and Professional Woman in the past. Comments that were included on the form nominating her for this gem of an honor said she was always volunteering for something, that she attends many city events even if she’s not volunteering and that she has a wonderful family.
Bev was born in Detroit.  Her family moved to Westland when she was small. Eventually, she graduated from Wayne Memorial High School and married her sweetheart the following year.  The bride and groom (his name is Jim) moved to Wayne where they raised two daughters, Julie and Leslie.  She is now the very proud grandmother and great-grandmother to 10 children ranging in age from 3-34.
When she was told she was the 2016 Diamond, Bev says she was embarrassed.  She thought “Why me?  There must be somebody more worthy.”  Bev downplays her efforts.  She says she volunteers because “I want to.  I enjoy being with people. This is my city. I’ve been here 55 years.”  Bev’s mother always volunteered while she was growing up and helped others at their church. “She’d give anybody the shirt off her back.”
This made an imprint on Bev as one day, somebody admired the shirt Bev was wearing. Although Bev really liked the shirt, she ended up later giving it to the admirer.  Just not right at the moment it was liked.
Remember Wheelfest?  Bev volunteered at Wheelfest when it first started back in the 1980s. She ran meetings and would do whatever needed to be done.  She remembers doing that for 15 years with Bill Copland, a former Diamond of the Community.
Although she doesn’t attend First Congregational Church in Wayne, she does volunteer to help in their kitchen during events.
She’s volunteered with the Civitans for 35 years and has been their president twice, secretary and treasurer over the years.
She’s also volunteered with the Goodfellows for about 35 years. With the Goodfellows, she has handled correspondence, helped raise money at the annual Christmas party fundraiser and works with the distribution of gift cards at Christmas for the children.
She was an early volunteer with the Wayne Ripple Effect, which is now Wayne Main Street, has served on the Board and is now a member of the promotions committee.
In the 1990s, she received the James Poplin Award for being involved in parks and recreation.
Recently, she has started helping her daughter Julie and son-in-law Don who are both master gardeners, with picking up food left over from the food show held at Suburban Collection Showplace to donate to Forgotten Harvest.
As if volunteering weren’t enough, at one time, Bev owned Julie’s Next to New, a resale shop, with her daughter Julie for four years.
Bev has always enjoyed camping and now likes to spend her spare time at the permanent campsite she and Jim have in Howell.  They try to go most weekends from April through November.  She used to help plan and volunteer for events at the site with other campers.  Now, they just relax, enjoy the other campers, play cards and drink wine. She also likes to make puzzles.
Bev belongs to a senior bowling league at Woodland Lanes in Livonia to pass the rest of her time.
“If somebody has spare time, there is always someone out there who can use you.  Don’t be afraid. You’ll never know who you might meet.  There are a lot of good people out there.”

Funding will be used for park and recreational improvements

Gave up New York and the world for Wayne