Highlights of what’s happening in Lansing 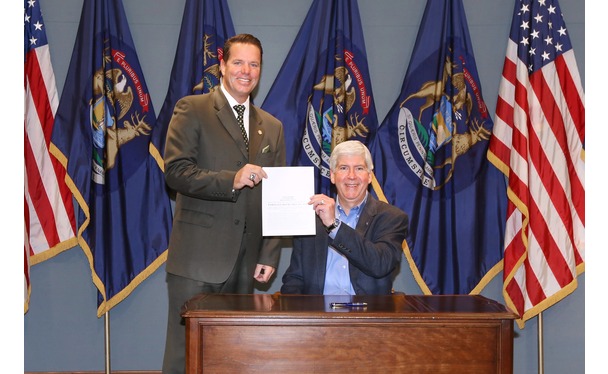 By Robert Kosowski – The Lame Duck session turned in over 200 bills. The last night of Lame Duck started at 10:00 a.m. on Thursday and finished at 7:00 a.m. the next morning. Road funding was the most significant bill that was finally voted on. The approved plan includes at 1% sales tax increase that the Legislature is sending to the ballot for voters to decide on May 5. The proposed constitutional amendment,  if implemented, would raise state sales tax from 6 to 7 percent. I voted yes on this proposal and feel that, quite frankly, it was the only solution that would pass both chambers. If this proposal passes it will add 1.3 billion dollars to fix our roads.
Other details on the proposal will help two areas that I have been fighting for the last two years. First it will add 300 to 400 million for our schools. The proposal also supplies a component to have a study done on what it takes to educate our children. This alone should solve exactly what is needed for our district’s budgets. The other component is that 100 million will be added to Cities and Communities. Essential services such as Fire and Police should benefit if this passes. Public Safety has always been one of my areas that I want to help and protect. The last area that helped me vote yes on this proposal was the restoration of the Earned Income Tax Credit, which was slashed in 2011, to its full 20% of the federal EITC level. Officials said that could put another $300 per year in the pockets of low-income families.
There were other components of the bill. One was to increase the cost of registrations for your car.  I stated throughout the year that I was not in favor of increasing fees on registrations for individuals. I did vote “No” but it did pass. My bill HB 5453 was passed by the House of Representatives in May but was not brought up in this package. The bill doubled the fines for trucks that are overweight. I have submitted the bill again for the upcoming cycle and I hope it receives another opportunity for it to pass.
The House of Representatives took up 811 bills this past year. I am honored to say that I did not miss a vote and had both perfect attendance and 100% voting rate.  The first term has been an extremely productive term for my team. Being the minority, I am very satisfied with the bills we have produced. I rank in the top five of the Democratic Party with the amount of Public Acts that have been signed into law. We have had five bills pass the House of Representatives, the Senate and have been signed by Governor Rick Snyder. The bills all became Public Acts and involve many different issues. From helping Veterans use service time and experience to assisting them in gaining jobs as a Boilermaker. I also had bills that helped election reform, assisting workers from Delphi to receive their workers compensation, and streamlining departments in the Department of Human Services making it easier for adoptions. I authored several other bills that passed the chamber but were stalled in the Senate; many of those will be introduced again this year.
My proudest bill was the bill to rename part of Ford Road as the” Brian Woehlke Memorial Highway.” Brian made the ultimate sacrifice while fighting a fire in Westland.  This was a bill that many people worked on including Mayor William R. Wild, Former Mayor Al Haidous, Fire Chief Michael Reddy and both City Councils. More details will be coming shortly on the date of the dedication.
We have sponsored activities within the community the last two years. We offered a free movie night where over 300 people attended. Special thanks to Phoenix Theaters for helping sponsor that special event. This past Thanksgiving it was my honor to give away turkeys to Veterans of Wayne and Westland. It was my pleasure working with Mayor William R. Wild, Vic Barra from the Wayne Ford Civic Center and Meijer, so that we could pass out over 75 turkeys for our Veterans. Speaking of that event I received a thank you card from one of the Veterans who served in World War II. He and his wife sent me a card that I will never forget. They thanked me for doing this for them. The couple has been married for 68 years and it truly touched me. I couldn’t wait to write back to tell them the honor was all mine.
We are planning on hosting another movie night in the next few months as well as many other community events. Starting this year we will be recognizing the “Business of the Month”. This is a new program where we will recognize businesses in Westland and Wayne and present them with a tribute as well as highlight them on our Facebook page. The business of the Month for January 2015 is My Lady’s Florist. To nominate a business, please contact our Lansing Office.
My team and I are always willing to meet with constituents and have set up our “Rep on the Road” program. This is where we will meet with Service Groups, Condominium Associations, Neighborhood Organizations as well as any constituent issue. This along with my Coffee Hours hopefully will make me fully accessible to you. If you or your organization is interested in having a meeting, please call my office and we can set up a date. Most times we will bring coffee and donuts and look forward to working on issues that will make Westland and Wayne better.
Please feel free to contact my office at (517) 373-2576 or by email me at robertkosowski@house.mi.-gov.  I want to thank the residents of Wayne and Westland for allowing me to serve you and for re-electing me for a second term. It is a privilege to represent you in Lansing.

A gift to our community