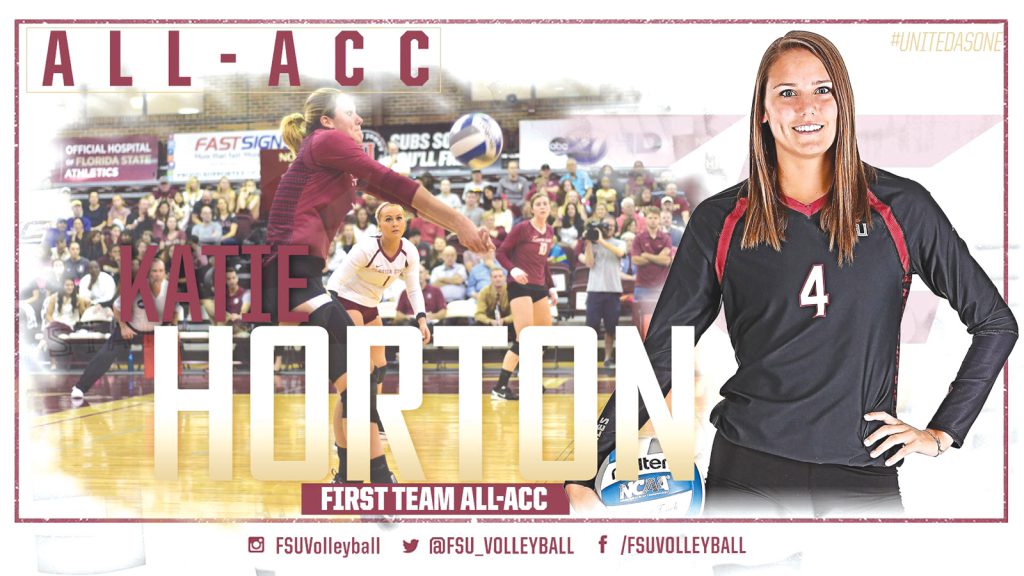 By Carolyn Marnon – When she was in 6th grade, Katie Horton was tested and diagnosed with dyslexia. She had been having trouble with reading and went through a long process to get diagnosed.  Now a student at Florida State University, it does take her a lot longer to study. She uses tutors and other resources to help her at school. Dyslexia has not affected however, her ability to be a champion volleyball player.
While attending Wayne Memorial High School, Katie played volleyball. Her greatest accomplishment then was winning districts back to back. The first time the team won districts was the first time Wayne Memorial had won districts in 20 years. This became her most memorable high school moment because the team was down 0-2 in sets (the best of 5 sets wins the match, so the other team only had to win 1 more set), and they came back to win. “It was a really emotional win, especially because my sister was a senior that year!”  She didn’t play any other sports in high school because the club volleyball teams she played for took too much of her time. However, she did find time to participate in the Champions of Wayne program with a goal of keeping her 4.0 GPA.
She came back to her alma mater, Wayne Memorial High School, in December to share with students her college experience and to answer questions that would help alleviate the fears and worries they had about going to college soon. “I was part of the mentoring when I went to Wayne Memorial, and they hosted a luncheon that allowed alumni to come back and talk about their college experience and our overall backgrounds. I talked about being dyslexic and making the best of it, and of course, playing volleyball. I talked to some of the students that were interested in college and about living on campus, scholarships, traveling while managing homework and our busy schedule as student-athletes.” When asked what her advice to other students in regards to education is, Katie replies “I would have to say that your work ethic in high school transfers over to how you are in college. So, it is important to establish good habits early.”
Katie started her college career by attending Ohio University in Athens, Ohio on a full-ride scholarship to play volleyball. Ohio had a small school and campus. She chose her major of Sports Management because she loved volleyball and knew she wanted to coach after college. “There wasn’t a lot to do there (at OU) besides hang out with friends and watching sports.” She decided to transfer to Florida State when, while looking for a new college, the coach at FSU, Chris Poole, contacted her to come visit. “FSU is a lot bigger school and there’s more to do around here. The football team is a big deal and of course, the beach isn’t far away…I left Ohio because the coach I committed to left after my freshman year and I didn’t want to stay there.”
Before getting into coaching though, her dream is to play professional volleyball. Volleyball is a big part of her life. When asked what she has enjoyed most about her college experience, she said “getting to travel has been a lot of fun, but that has to do with volleyball.”
What has been her greatest volleyball achievement? “Becoming the first player (in program history) to reach 1000 kills and 1000 digs at Florida State because no one has done that before,” she says. To educate you, a kill in volleyball is when “you spike the ball and the other team can’t dig it. A dig is when you pass the ball when the opponent spikes the ball at you,” according to Katie.
Katie ended her senior season by finishing among the top Florida State players in 11 categories including total attacks (1,052-1st), service aces (22-1st), service aces/set (0.17-1st), kills (362-2nd), kills/set (2.87-2nd), digs (416-2nd), digs/set (3.30-2nd), assisted blocks (65-3rd), total blocks (70-4th) and blocks/set (0.56-5th).
“An attack is when one of the players at the net spikes the ball. A service ace is when you serve the ball and the other team can’t return it. A block is when you block the ball as the opponent is trying to spike the ball,” informs Katie.
Throughout the 2016 season, Katie received her second ACC (Atlantic Coast Conference) Player of the Week honor, first team All-ACC honors, AVCA (American Volleyball Coaches Association) All-East Region team recognition and honorable mention All-America honors from PrepVolleyball.com.
She leaves her mark on the Florida State record books by ranking in five major categories including kills, digs, digs/set, assisted blocks and total blocks. “My most memorable moment for college was being down 0-2 in sets to our rivals, the University of Florida, at their building and coming back to beat them. This was during the NCAA tournament and it knocked them out.” Katie’s coach, Chris Poole, has commented that Katie has been one of their best all-around players the last three years and has never backed down from a challenge.
Besides playing indoor volleyball, she also plays beach volleyball. “The club I played for started playing beach volleyball my junior year of high school.  I tried it and really liked it.”
Last year, her team at Florida State University was runner up at the NCAA Nationals. The beach season has just started for this year. So far, her greatest beach volleyball accomplishment has been making the fourth team and getting to play in the national tournament, making it to finals. She isn’t involved in any other activities or clubs because the two different volleyball seasons take up most of her time.
Katie hasn’t decided where she wants to live after she graduates. Whether she stays in Florida, comes back to Michigan or moves elsewhere will depend on the opportunities that become available to her. “I am a very family oriented person, and it is hard to be away from home. I facetime home as much as I can!”

Look at my ability, not my disability!