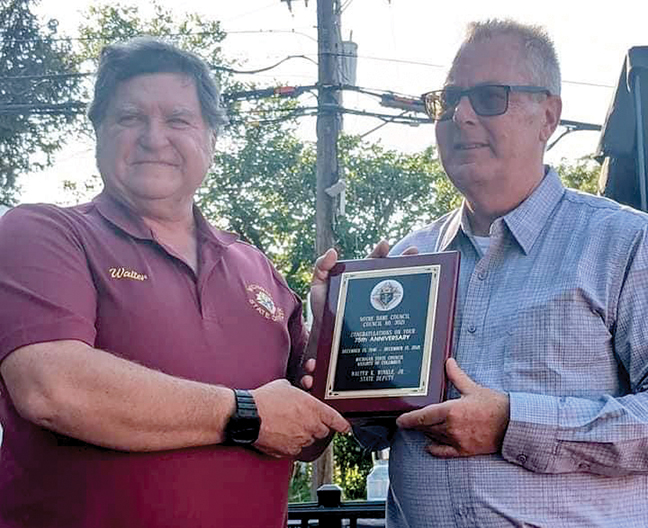 By Sarah Shurge – A lot can happen in 75 years. A lot of change and growth. Or a lot of stagnation and decline. When it comes to organizations, some don’t last to see 75 years.
The Knights of Columbus Notre Dame Council 3021 have not only survived but thrived in the City of Wayne for the past 75 years.
“For any organization to last this long is a feat. Especially with the changing demographics and mindset of the community. 75 years and to still be an all-male organization is a testament to what the Knights stand for,” said Paul Sposite, Grand Knight of the Notre Dame Council.
On February 6, 1882, the Knights of Columbus was founded by Father Michael J. McGivney, assistant pastor of St. Mary’s Church in New Haven.
Thanks to Father McGivney and some of his parishioners, the Connecticut state legislature officially chartered the Knights of Columbus as a fraternal benefit society on March 29, 1882.
It was originally founded as a paternal organization to meet the needs of families suffering from the death of a breadwinner. Since the day it was founded, service and charity have been at the heart of the Knights.
Being a Knight now in the 21st century is a lot different than it was back in the day, however, the mission remains true to its founding principles of charity, unity, and fraternity.
“It builds a brotherhood. You really build a bond between the members and families,” said Grand Knight Sposite.
Sposite has been active with the Knights for five years and enjoys reaching out to the community and getting groups together.
“I like the opportunity to get us together and have that comradery and fellowship that comes along with it,” said Sposite.
The Knights strive to be as involved in the community as much as they can. They partnered with the City of Wayne Downtown Development Authority and have started events like Wayne’s Downtown Days. Along with their annual Time to Cleanup Peace Memorial Park, not to mention dinner shows, Small Business Saturdays, and their involvement with Wayne Main Street. As well as many other events like the Patriots Day Celebration that just happened on September 11th.
“A lot of people don’t see them [the events] or attend, but it’s not always about the numbers. It’s just about doing what’s right and giving and providing a service to the community we serve,” said Grand Knight Sposite.
Throughout the Knights’ 75 years in Wayne, they have switched locations four different times but for the past 15 years, they have been located at the Notre Dame Hall on Wayne Road in downtown Wayne.
The Knights had their 75th anniversary celebration on Sunday, September 19th, at Notre Dame Hall in their new outdoor seating area.
The celebration started with a dedication of the hall and blessings of the memorial garden, followed by a wine and cheese reception. The memorial garden is a place where members can buy plagues to memorialize past members that have passed away.