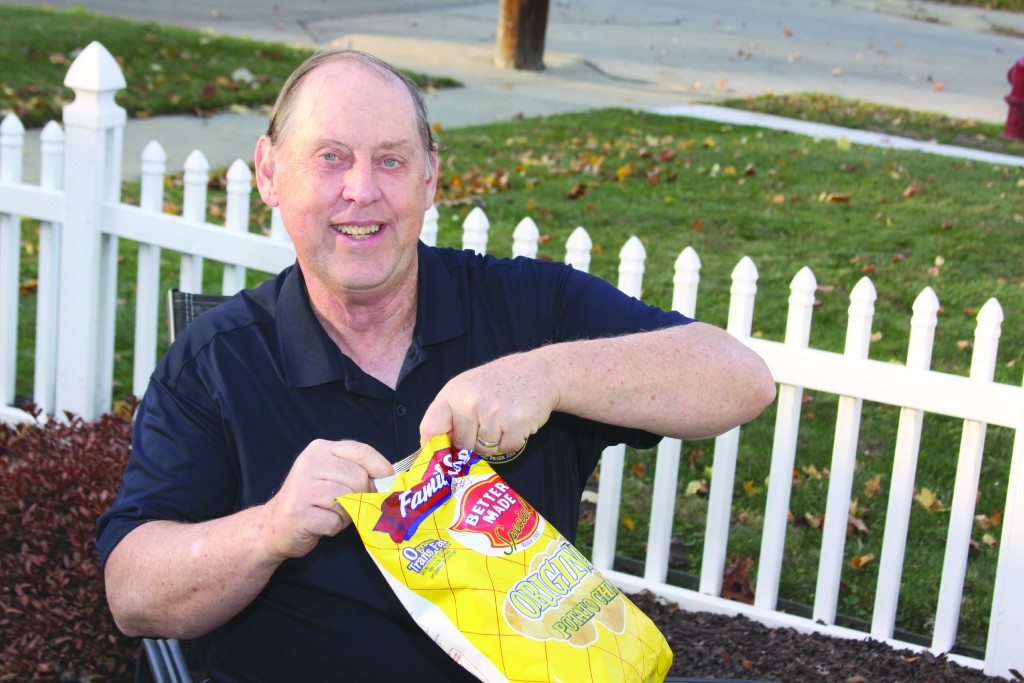 By Courtney Conover – He’s known as a husband to his wife Sue, dad to his three children, and to the residents of Wayne, he has long been known as councilman.
“Some people call me Al, but those close to me know that I prefer Albert,” says Albert Damitio, who, after 22 years of service, has retired from the Wayne City Council.
But few may know that Damitio also answers to a less suspecting moniker.
“Chips,” Damitio confesses of the nickname he acquired during his early years as a member of the Wayne Jaycees. “Because I love potato chips.”
But as much as he loves snack food, he loves the City of Wayne more.
Born on the east side of Detroit near Detroit City Airport – and having grown up in that area, too – 43 years ago Damitio married a woman from Wayne named Sue, and the two have remained here ever since.
“She would never leave,” says Damitio with kind-hearted laughter.
The couple did much more than purchase their first home in Wayne. They laid down roots, becoming the proud parents of two daughters and one son – Amy, 41, Carey, 39, and David, 35 – who have produced nine grandchildren between them.
Damitio, who earned degrees from the University of Detroit, Wayne State University, Michigan State University, and a masters in mechanical engineering from University of Michigan-Dearborn, first delved into the waters of civic leadership as a member and president of the Wayne Jaycees and still fondly recalls the wide array of projects he is pleased to have been a part of.
“The Christmas parade, the haunted house we did at the community center, bike safety initiatives…” Damitio remembers, “After being involved with all those projects, it was sort of natural to seek election.”
An appointment to the Wayne Planning Commission followed, and then Damitio began his tenure as a Wayne councilman after first becoming elected in 1983. He served 12 consecutive years before yielding to an entirely different ball game.
Puck game, actually.
“Our kids were growing up, in high school and such, and my wife and I were busy with a lot of activities – and one of them included hockey,” says Damitio, who coached for 12 years in several communities, including Garden City and Allen Park in addition to Wayne. “I don’t know if you know about hockey, but it gets to be quite consuming.”
Damitio returned to the council after becoming appointed in 2005 to replace the seat that had been vacated by Don Hartford, and Damitio says that his financial concerns about the city are what lured him back to serve. He went on to experience two successful elections in 2007 and 2011.
He cites two deeds in particular with eliciting within him the most pride: the construction of the Wayne Public Library and his involvement in the Dangerous Building Commission.
“When we built the library, it was fully paid for,” Damitio recalls. “When we were discussing location and how to pay for it, I suggested that we use DDA (Downtown Development Authority) funds because it is located in the downtown area. And, today, I think it’s such a great facility – my grandkids, my wife, and I use it all the time.”
And while Damitio’s role as one of the founding members of the city’s Dangerous Building Commission took place between his terms on the council, his involvement with the commission ranks high on his list of political achievements. 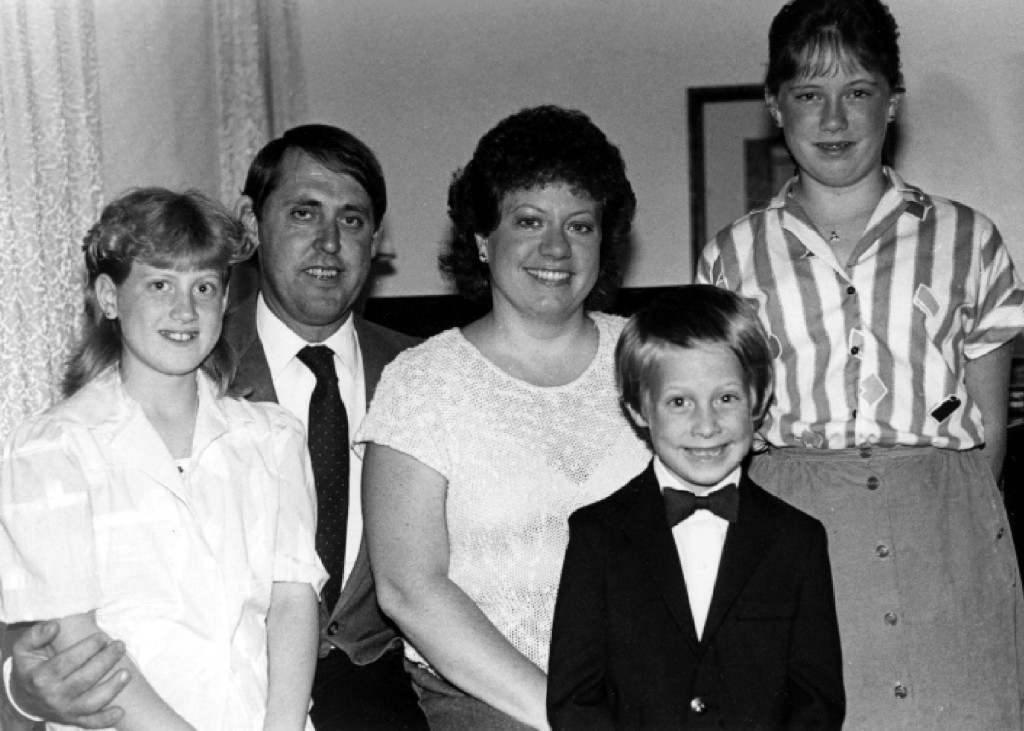 Says Damitio, who was elected by commission members to serve as chairman, “The procedure to take down a building that had not been kept up properly would literally take 10 years or more – and sometimes, legally, nothing could be done. The Dangerous Building Commission enabled us to expedite the process by reviewing inspections of the building, and gave owners time to fix up the building, and if they couldn’t, the building would be removed – whether it is a business or a house. No one wants to be a neighbor to that. ”
The council’s effort to create separate storm and drain water systems – which, according to Damitio, brought about “a night and day difference” regarding the condition of the Rouge River – is also something he’s thankful to have been a part of.
Today, Damitio maintains that Wayne still needs a balanced budget as well as a fully-staffed police department. He says, “We are too short of police officers to be able to adequately serve the citizens. We still have work to do.”
Yet, Damitio must respectfully leave those changes for the next chapter of the city’s civic leadership: Because the City of Wayne passed a term limit provision which prohibits an elected official from serving more than 16 years as a councilperson, mayor, or any combination of the two, Damitio is not able to run again.
When asked if he would run if he could, he isn’t quite sure.
“You know, that’s a good question,” Damitio begins. “I had intentions to, but I can’t say for positive that I would have. I wouldn’t have minded to serve further, but at this point, there’s no choice, really.”
One thing is for certain, however: That Damitio is appreciative of the get-well cards, prayers, and visits he received when he was diagnosed with melanoma cancer in the beginning of 2011.
“I had a large cyst about the size of a fist in my right leg,” Damitio recalls. “The morning I dropped off my petitions to run for council, my wife drove me straight from there to U of M Hospital for my operation. And the fact that I received such overwhelming support from this community – when everyone’s got their own problems – makes it even more impressive.” 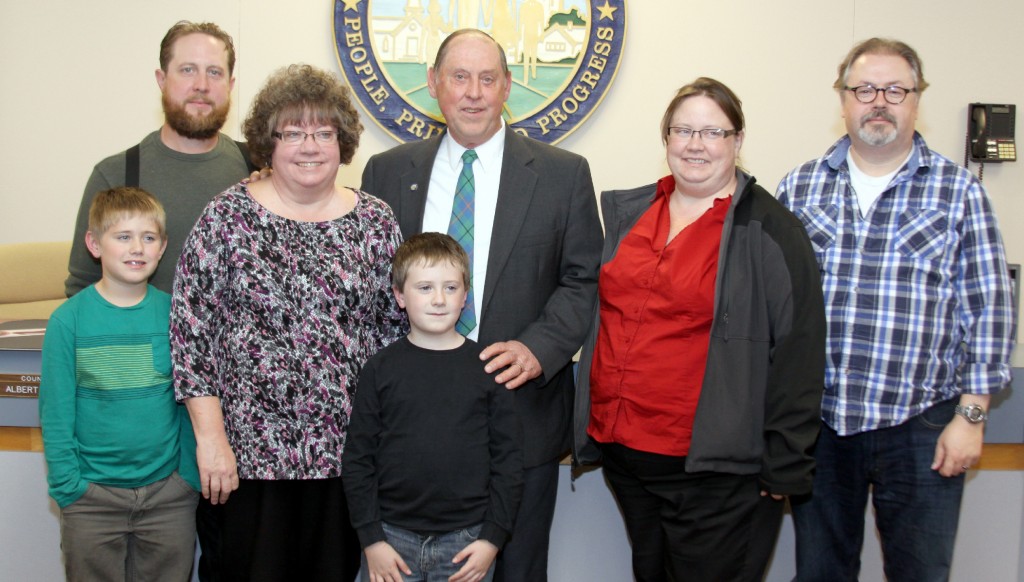 Albert’s family: Connor, David, Sue, Peter, Albert, Amy and Mike at his last meeting as councilman in the City of Wayne on November 4, 2015.

To say that Damitio has had a great run as councilman would be an understatement, and perhaps the largest boon is that he continues to love the City of Wayne.
Says Damitio, who is also a retiree of Chrysler after a 39-year career as an engineer with the company, “I love the State Wayne Theatre, the mural, and museum.”
With a successful career and tenure as councilman now in his rearview mirror, Damitio and his wife now look forward to traveling more. The couple has already visited France more than a dozen times and vows to return soon.
And just as they’ve done in the past, they’ll come right back home…to Wayne.