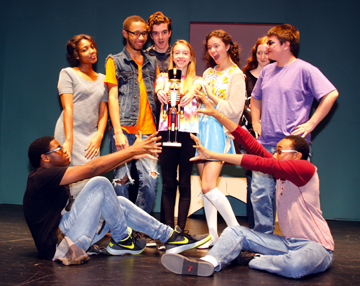 By Carolyn Marnon – “The Nutcracker” is a family friendly production which incorporates music and dance and is the fall play at Wayne Memorial High School.  “I chose ‘The Nutcracker’ as our fall production because the theme for the 2015/16 show season is ‘family friendly theater’.  This is the first holiday-based play that I have produced at Wayne Memorial,” stated Katie Sullivan, drama director and in her 12th year at Wayne Memorial.
The production follows Clara, an imaginative young girl, as she experiences the magic of Christmas and the joy that comes with believing.  She receives a wooden Nutcracker as a gift from her godfather.  When she finds herself in a time of need, the Nutcracker comes to life and Clara helps him on his quest to take back his crown and rule as Prince of Candy Land.
The cast rehearses an average of four days each week for the six weeks leading up to the production.  When the curtain opens on the first show, the cast will have rehearsed for almost 100 hours. There are 35 student cast members and about 20 student crew members that are working to make this production a success.
Crew members are just as important as cast members. They are responsible for creating the set, running lighting and sound for the show as well as numerous other backstage responsibilities.  Ms. Sullivan has two student Assistant Directors, Alicia Highland and Kaitlyn Frawley.  These young women assist with running rehearsals, fundraising, publicity, and maintaining acceptable grades with the cast.  There is also a student in charge of Educational Outreach, Hannah Hamilton, who has been assisting with creating a production guide including activities for young audience members.
Others involved in the production include technical directors Justin Monit and Tim Sullivan who lead the crew efforts. Alumni crew member, Revah Herman, works directly with the technical directors and crew. Alumni choreographer, Erika Culey, has been responsible for teaching the dances that the cast perform.
“We create a world on stage that is meant to be magical for our audience.  If we want the audience to believe in the magic, we need to believe in it too!” enthused Ms. Sullivan.
Performances take place at Wayne Memorial High School on November 19, 20 and 21 at 7:00pm each evening.  Tickets are $5 for students and children and $8 for adults.
As a side note, mark your calendar now for the spring show being held April 28-30, 2016—“The Little Mermaid”.