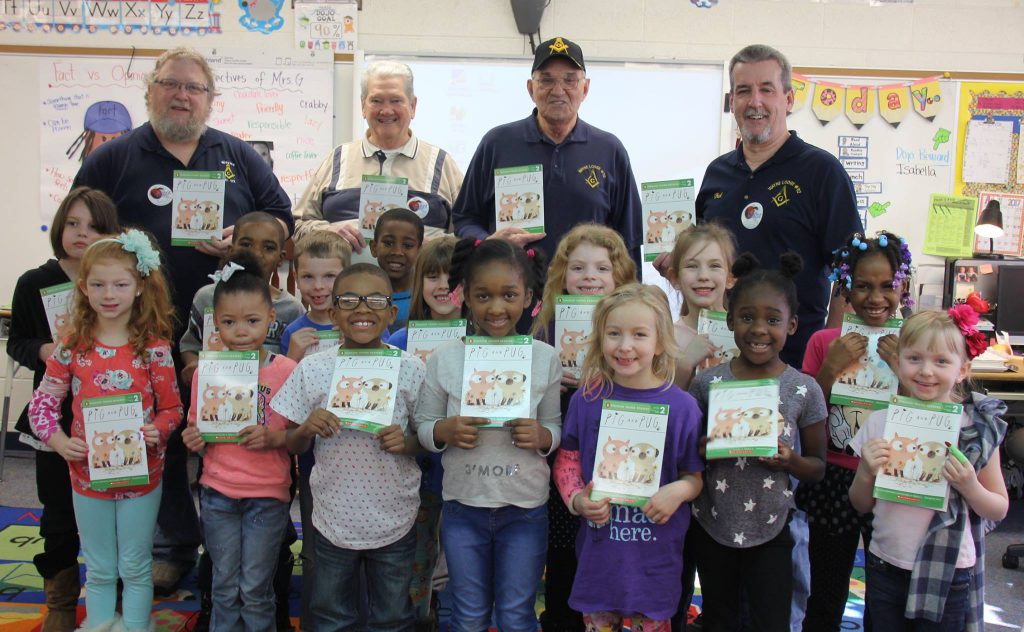 Volunteers from the Masons with first grade students that they donated a book to every first grader in the Wayne Westland School District.

March Reading Month
On March 29 and 30, members of the Wayne Masonic Temple, along with their wives, branched out to the first grade classrooms of eleven elementary schools in the Wayne Westland Community School District to present a book to every first grader in the district. They handed out approximately 900 books in honor of March Reading Month.
The Masons started working on this project about a year ago. The Masons knew they wanted to do something that helped children. MaryAnn Brewer, the wife of a member and very active in lodge activities, is a retired reading specialist for the Garden City schools.  She suggested the project to help the kids read better.  There were many meetings with the school district to work out the details. Feedback had to be obtained from teachers and others involved in how to make the project be a success. The schools then purchased the books with the Masons reimbursing them for the cost. Mason Bud Prough said the schools were very helpful in making this all happen.
The reading specialist for the Wayne Westland schools picked out the book, “Pig and Pug” by Laura Marchesani and Zenaidas E. Medina. It’s about a pig living on a farm with other animals. All the animals have friends except for Pig. A new animal comes to the farm, Pug. Pug has a curly tail, likes to play in the mud and even snorts, just like Pig. Even though Pug is not a pig, maybe they can be friends.  This story about friendship was given to each first grader.
“Feedback was really wonderful with everyone involved…My hope is that we’ll do something along those lines every year…Schools did a wonderful job in making this happen,” said Bud Prough.  He said the kids, teachers and principals were all enthusiastic about the book project. 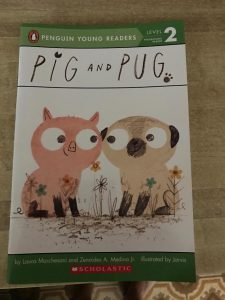 JROTC Fundraisers
For a couple years now, the Masons have done spaghetti dinner fundraisers twice during the school year to benefit the JROTC program at Wayne Memorial High School. The JROTC program “helps keep a lot of kids out of trouble and progressing not only to their high school diplomas…but to a secondary education…They help motivate the kids in that direction,” said Mason Bud Prough.
Prough is a school bus driver. While driving the JROTC to one of their events, he was able to spend the whole day talking to members and their leaders about the program.  He went back to the Masonic lodge and told his lodge brothers about the program. They agreed it was a worthwhile program to support.
Wayne-Westland Special Olympics
Prough was talking to a co-worker one day when he learned the co-worker had a sister in the Special Olympics. Now the Masons support the Wayne-Westland Special Olympics by hosting their annual awards banquet each year.  All the athletes and their families are invited to this special event just for them.
Who are the Masons?
The Masons are a fraternal organization, otherwise known as a fraternity. It is a group of men who like to get together, make new friends, and socialize. There are no other “backgrounds” needed.  They also have a women’s group called Eastern Star and youth groups: Demolay for boys and Rainbows for girls.  The youth groups focus on leadership training and public speaking. You may see bumper stickers that say “Ask one to be one.”
The Masons do not solicit members. Membership increases because someone asks a member about joining.
The Masons have two additional fundraisers coming up. On April 28, there will be a spaghetti dinner fundraiser for the Wayne-Westland Therapeutic Pool (Dyer Center). On May 5, there will be a spaghetti fundraiser for Wayne-Westland Special Olympics.  Both events will be at the Wayne Masonic Temple, 37137 Palmer Rd.