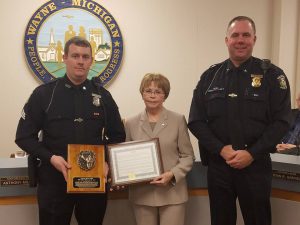 The Wayne Police Department’s Citation Board voted Sergeant Brent Cahill as the 2016 Police Officer of the Year. Sgt. Cahill was awarded a plaque from the Wayne Police Department at the March 22 City Council meeting with family, friends, and fellow officers present. Representatives from the American Legion Post 251 and Wayne County District 11 Commissioner Abdul “Al” Haidous also presented Sgt. Cahill with recognitions. Sgt. Cahill has been with the Wayne PD since January 2009. “He’s a true example of the men and women in the department,” said Police Chief Alan Maciag. The American Legion honors law enforcement and fire departments for outstanding public service.