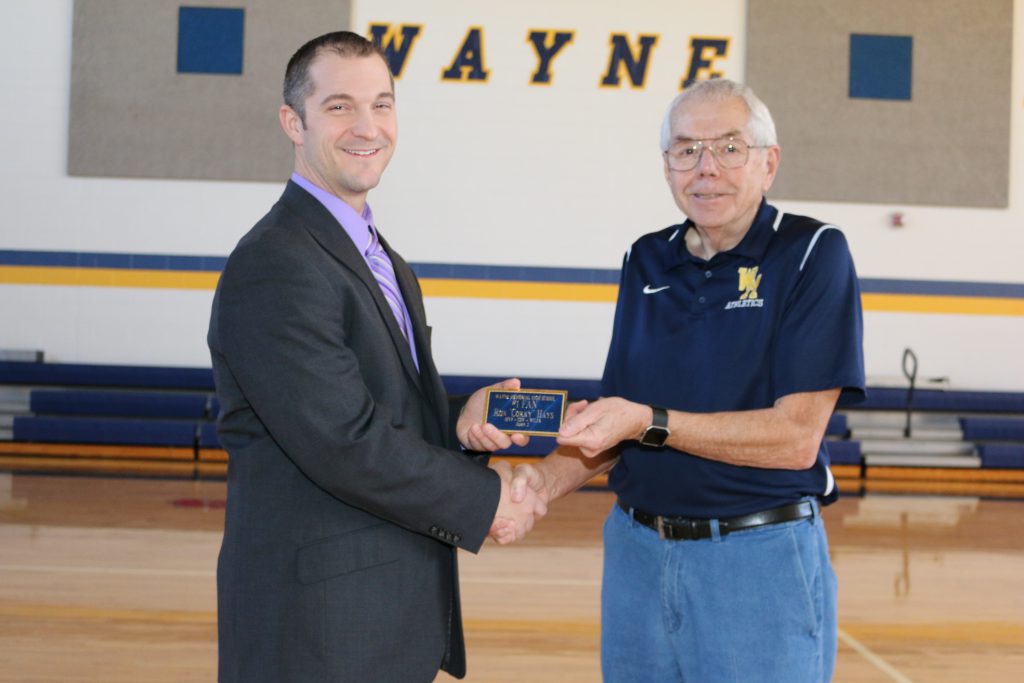 Ron “Corky” Hays moved to Wayne (Norwayne) in 1956 at the age of 13.  He attended Adams Jr. High the first full year it was open (1956), he was in the 8th grade.
Deno DeLuca was his gym teacher and basketball coach at Wayne Memorial High School.  Mr. DeLuca would let students in the back door so they could attend Wayne Varsity games.  This was Ron’s first of many games and events at W.M.H.S.
Ron played basketball at W.M.H.S. for 3 years and one year at Eastern Michigan University.  Looking back Ron recalls all the great games and players.  The 1962 team his brother Rob played for won their first 14 in a row before losing the Regionals and finishing 17-2.
In 1996 and 1997, Wayne Memorial made it to the Breslin Center and the Final 4 both years.  These were the teams led by Lorenzo Guess.  Over a 4 year stretch, they were something like 84-14.  “During a 15 year run I would say Wayne averaged a 16-18 win year,” Ron said.
Ron stated, “the current W.M.H.S. Basketball team of 2017 was an excellent team, finishing about 20-4, probably in the top 3 of all time.”  Ron added “This year’s Girls Basketball team was the best of all…Wayne Memorial High School has produced many fine players who have gone on to careers in college.”
“The most exciting was a 5’5” dynamo named Genois Safford who played at Wayne High in 2000 – 2003.  He led the team in everything and went on to play at Schoolcraft college.  I can only imagine what he could have done had he been 6’2”.  It is hard to compare players and teams over the years.” Ron said.
Ron’s good friend Bill Sexton was the force behind this award honoring Ron “Corky” Hays along with help from Principal Kevin Webber and A.D. Greg Ambrose.  It has been estimated that Ron has seen over 1,000 Wayne Memorial High School sporting events, therefore the “Wayne Memorial High School’s #1 Fan” award was born.  Ron still attends as much and as many events as he can.  This last year he attended 2 high school football games in Georgia while visiting his grandchildren who he also took to the game making it the four year old’s first football game.  He also went to a football game in Kentucky while visiting for a family reunion.  “I also attended basketball games in both Georgia and Kentucky,” Ron added.
Ron began working in the Press Box for football games about 25 years ago with the late Bill Brooks.  He’s still there.  Ron gets to see football, basketball, baseball, track, and cross country meets and an occasional soccer game.  Once in a while he will even attend some of the plays at W.M.H.S.  “There is nothing like going to high school events.  The best thing about the whole deal is all the kids I get to meet and some that I know personally.  Some are children of my friends and some are new ones I meet each year.  It is a great feeling when they come back and remember me and acknowledge me… great memories,” Ron recalls.  Ron says that sometimes he can’t remember what he ate for breakfast (L.O.L.), but he can remember games and scores from many years ago.  After all, he has been at this for over 60 years.
Ron and Bill Sexton still attend many Wayne High games and both miss the late Bill Brooks and Don Graham.  “They really would have enjoyed the last couple of years at Wayne High basketball games,” Ron says.
Ron still loves Wayne High although some teams have been down, they still have great spirit and drive.  As many know, Wayne’s football team has only won 3 games since 2009, however the crowds keep coming and the kids keep competing.  Ron says, “I’m sure things will get better.  Our JROTC program competes nationally and our academics are at an all-time high.  I am going to attend events at Wayne High for as long as I can.  GO WAYNE PRIDE!”