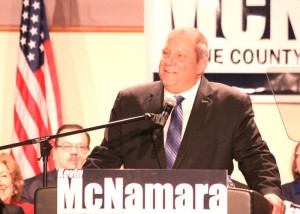 Wayne County Commissioner Kevin M. McNamara, 56, of Belleville, also made his announcement that he will seek the position of Wayne County Executive.
“The possibilities for our county are greater than our challenges,” said McNamara. “Wayne County residents are seeking real, sustainable change. As commissioner, I have been courageous enough to take a hit when I stood up for what I believed was best for our county. However, I cannot instill real change as a commissioner and that is why I seek to become the county executive.”
McNamara has been a Wayne County Commissioner since 2006 serving District 11, which represents the communities of Belleville, Huron Township, Romulus, Sumpter Township, Van Buren Township, Wayne and a southern portion of Westland. He is a board member of the Wayne County Airport Authority and chairs the Wayne County Head Start board.
McNamara began to outline his vision for Wayne County during the announcement, “Our three priorities will be to balance the budget; create an environment of innovation and transformation in county government in order to affect change; and ensure transparency. I plan to form a task force that represents communities across this county so that they have a voice in reinventing Wayne County. Together, we will prioritize services and I project significant cost savings during that process.”
McNamara is the son of former Wayne County Executive Edward McNamara.
“There needs to be a reinvention of county government like there was in the 1960s and 1980s,” said McNamara. “Together, we can reinvent Wayne County government through a new model that will be strong for at least the next 20 years.”
So far Wild and McNamara are the only two candidates who have announced their intentions. All candidates must file by April 22.