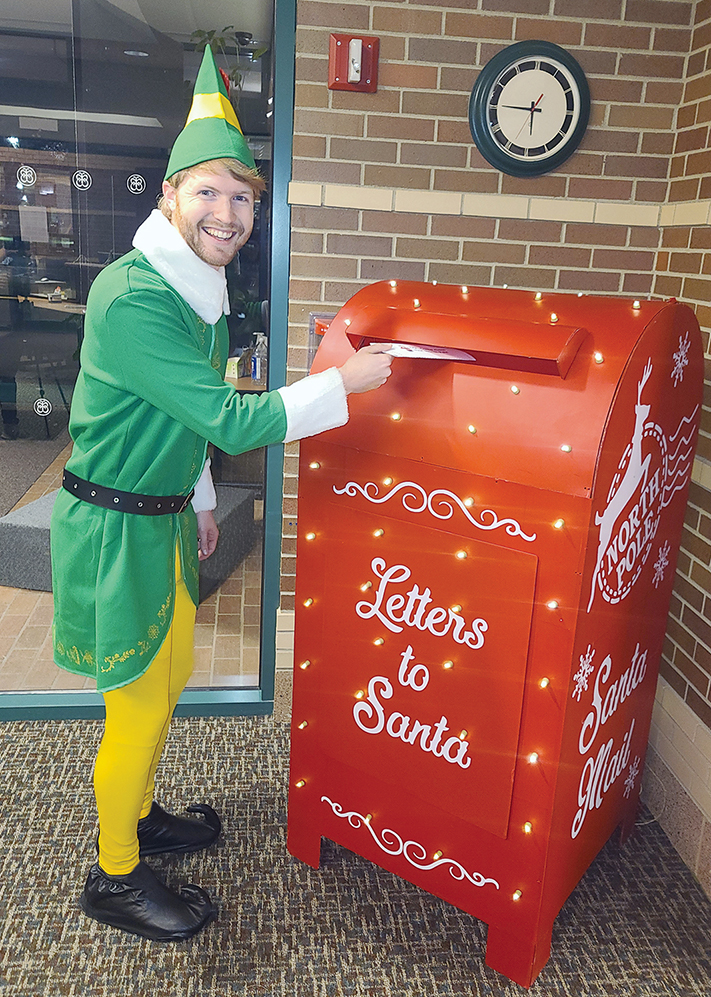 Buddy Elf mails his letter to Santa at the Wayne Public Library.

By Sarah Shurge – A library is a place for creativity, imagination, and most importantly, reading. December is a time when little ones write their letters to Santa in hopes he reads what they have to say.
Santa’s mailbox has been set up at the Wayne Public Library since Tuesday, November 29th. This is a mailbox for any children who would like to send a letter to Santa.
The library has a template letter that kids can fill out with suggestions of what they want to tell Santa. The template has space for older kids to tell Santa about good things they have done this year, along with things they are hoping to receive. There is also space for little kids to draw Santa a picture.
Kids can drop their letter in the mailbox, and with their grown-up’s approval, they can add their address on the letter, and Santa may write back!
The mailbox is placed in the library lobby. It is big, red, and has sparkly lights on it so you can’t miss it. Template letters are in the kid’s area near the mailbox.
The mailbox will be up until December 23rd.
This is the first year the Wayne Public Library has hosted Santa’s mailbox.
“I’m excited to be able to be part of it this year,” said Jody Wolak, Wayne Public Library director. “It’s something fun to get into the holiday spirit and encourages creativity and imagination.”
The library also has its winter program scheduled for the first week in December. Monday, December 5th through Saturday the 10th, there will be drop-in ornament crafting during hours of operation. Kids of all ages are welcomed to come and make an ornament. They can either take their ornament home or leave it to help decorate the library.
On Thursday, December 8th, at 6:30 p.m., there will be a teen luminary craft event. Teens will be making their own illuminated winter wonderland scene with a mason jar and craft materials.
On Saturday, December 10th, from 3:30-4:30 p.m., there will be winter button making. Kids of all ages can design, color, and customize their own button.
Last month, the library hosted the Veterans display throughout the month of November to honor the local veterans. “We had pictures up from last year and new submissions as well. Lots of people came in to look at photos,” said Wolak. “The display not only recognized our veterans, but brought some new people into the library and introduced them to what we have to offer here.”
The library is open Monday through Thursday from 10 a.m. to 8 p.m. and Friday and Saturday from 12 p.m. to 5 p.m. It’s closed on Sunday.
“We are always open to suggestions from the community about events and displays the library can do. Please continue to let us know. That’s how we continue to offer things that benefit the community,” said Wolak. For more information about the Wayne Public Library, visit wayne.lib.mi.us or email help@wayne.lib.m.us or call (734)721-7832.