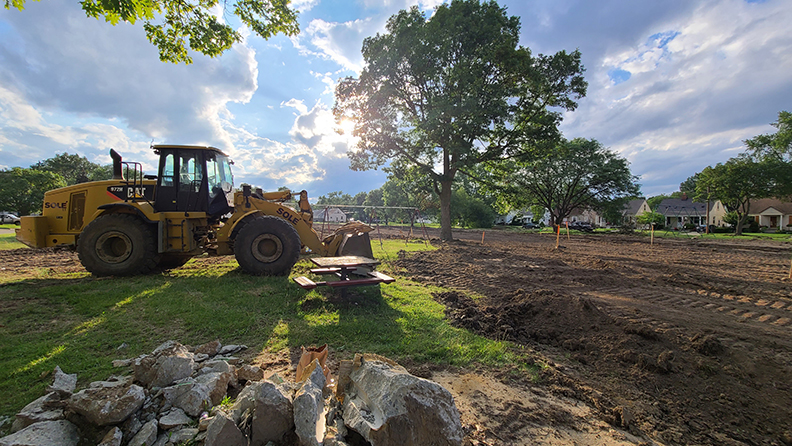 By Sarah Shurge – If you’ve driven down Howe Road within the last few weeks, or live near Kiwanis Park, you’ve probably noticed some changes happening.
Infinity Homes & Co has purchased the land that was Kiwanis Park and on-site work began within the last couple of weeks.
The giant mounds of dirt you see as you drive by is part of earthwork that is currently being done. Earthwork is done to reconfigure the topography of the site (or the natural and artificial physical features of an area) to achieve the design levels.
Infinity Homes & Co is scheduled to finish earthwork near the end of June/ beginning of July.
Even though we’re just recently seeing work being done, Infinity Homes & Co has been working on a deal with the City of Wayne for close to 8-10 months. They closed within the last 30 days and that’s when dirt began to move.
As earthwork is being completed, infrastructure work is also being done. Infinity Homes & Co will be working on getting a permit for vertical construction in July and will begin prepping for homes. Once the permit is approved, construction should start in August or September.
Houses are generally taking six to eight months to build with the shortages companies are dealing with. The whole process tends to take 12 months. 22 homes will be going up.
No floor plan or base prices have been released yet. Information will be released within the next 30 days.
There are possibly four different colonial style homes that will be built, most of which will have three bedrooms.
However, a few might have four bedrooms.
As of now, the homes are believed to be 1,500 to 2,200 square feet and pricing from the low $200s.
“Even by today’s standards, people will be surprised to see the price tags of the homes. It’s a great investment,” said Rino Soave, CEO of Infinity Homes & Co.
Sales are being conducted from Legacy Park Sales Gallery.
Stay tuned for updates and visit Infinity Homes & Co’s website for announcements and new information at infinityhomescorp.com. If you have questions or would like to speak with someone, you can call (646)627-9528.