By : thewaynedispatch
Comment: Off
Tag: City of Wayne, Deborah Wass 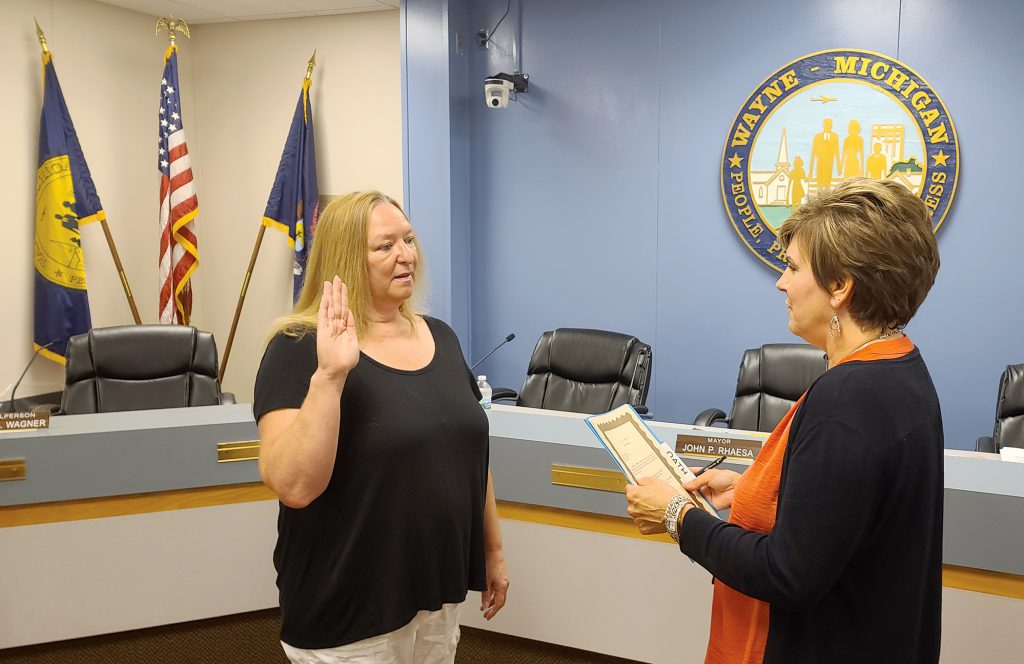 By Sarah Shurge – On Tuesday, June 29th, the vacant seat on city council was filled by Deborah Wass. With unanimous yeses across the board, the motion carried and Wass was voted in. Wass was officially sworn in after the council meeting.
Wass is a long-standing resident of Wayne with a passion and love for the city.
“I love where I live,” said Wass. “I wore the ‘It’s Great to Live in Wayne’ shirt.”
Her parents moved her to the City of Wayne when she was six months old, and she has continued to live here most of her life.
She met her husband at Wayne Memorial High School in 1984 during marching band camp. He was a 10th grade tenor saxophone player and she was an 11th grade flautist. They got married in 1992 and had two daughters that continued the band tradition by playing flute and trumpet. Wass has been involved in Wayne sports and has been on the Board of Review and the Planning Commission for years now.
“Being on the Planning Commission, I get to see new business going on in Wayne. I get to see all the positives and I want everyone else to see the great things that are going on. Our citizens don’t really know about them or see them,” said Wass.
Wass ran for city council last time there was a vacancy a few years back. With multiple people running for the spot, Wass unfortunately wasn’t picked.
“I wasn’t unhappy with who they selected. It just wasn’t my time and now it seems like it is,” said Wass.
Wass continued to watch and wait for another opportunity to apply for a seat again. This time around, she was the only one to run.
“It makes me happy and sad. I feel like more people should have applied. It’s a little sad there weren’t more people than just me wanting to be involved but I’m really excited for this opportunity,” said Wass.
Wass is stepping into this with an open mind and ready to learn.
“I want to help the council prioritize what I need to do. I’m waiting to see what the priorities are and what the goals are. Everyone has their niche, and I’m waiting to see where I fit into that,” said Wass.
The council seemed excited to welcome Wass to the team.
“I’m really excited to have you as part of the team up here to work to make the City of Wayne better,” said Wayne Mayor John Rhaesa to Wass during the council meeting. “We have had conversations over the years and I know that you do care about the community deeply and I think that you will be a great asset to this body.”