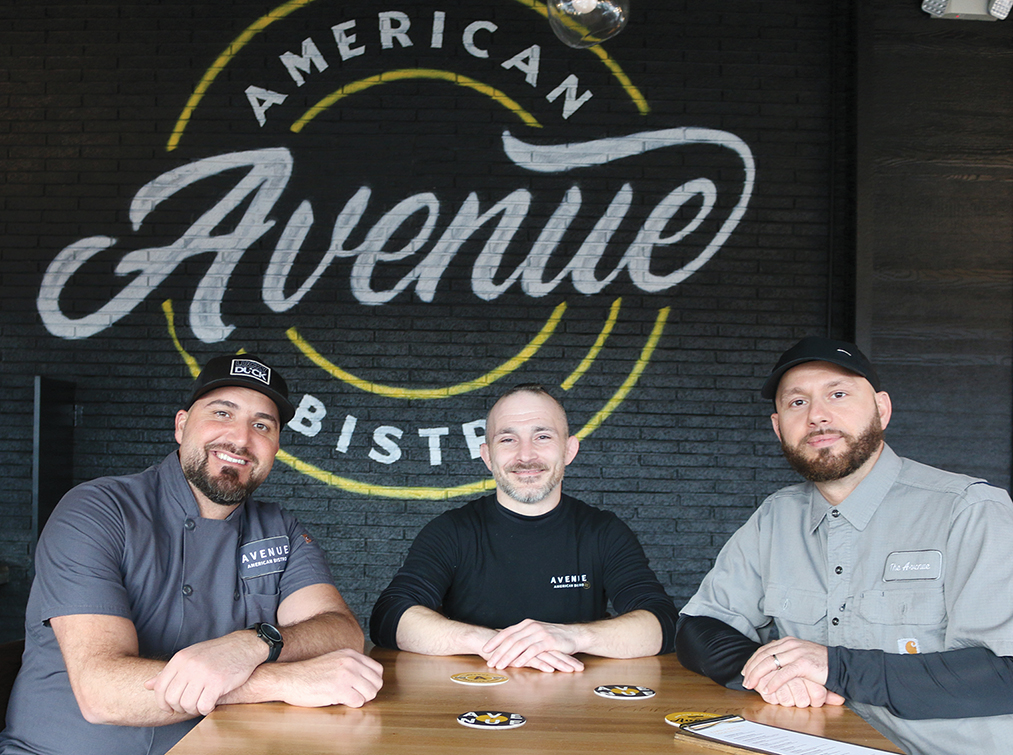 Founders and developers Mohammed “Karl” Makky and Tony Duhani with one of their operational managers, Jason Crothers (middle). Photo by John Rhaesa

By Courtney Conover – In the culinary industry, there’s no shortage of restaurant slang to characterize shortcomings.
The cooks in the back of the house may find themselves in the weeds, for example, when they’re knee-deep in orders, while to eighty-six something means to run out of it.
But here’s a phrase—a good one—that’s a definite crowd pleaser: scratch kitchen.
In a scratch kitchen, the dishes are prepared with fresh ingredients. They aren’t frozen or processed. This, of course, is an understandable draw for diners who put a premium on quality. And we’re not just talking about self-professed “foodies”: Nowadays, people want to know what they’re eating and how it was made.
It’s an assignment Mohammed “Karl” Makky and Tony Duhani, co-owners of Avenue American Bistro, have gladly undertaken. And the result is a delectable menu that one will be hard-pressed to find anywhere else.
Welcome to Avenue American Bistro, where the chicken is all-natural and kosher; the grilled chicken is wood-fired; the beef is prime (and kosher); the salmon is Norwegian and lightly smoked and dry-rubbed in-house, and the bread is baked by the restaurant’s very own pastry chef.
And that’s just for starters.
“It’s the technique behind our cooking,” Duhani emphasizes.
Take their signature Korean Beef Brisket, for instance, which is listed under the street tacos section of their menu.
“There’s a lot of work that goes into one taco,” says Duhani.
He’s not exaggerating. At all.
It starts with a 14-hour smoked brisket, followed by a sweet soy glaze, gochujang (FYI, that’s a red chili-based condiment used in Korean cuisine) mayonnaise, and kimchi slaw. Toasted sesame and micro-cilantro round out the medley, which is then served on two dorado-style Hacienda corn tortillas—which are home-grown in Southwest Detroit, by the way.
And those sesame seeds?
“We toast them in house, too,” adds Duhani.
And leave it to Makky and Duhani to take a highly-revered classic—like good ‘ol onion soup—and kick it up a notch. This is where Avenue’s attention to detail is simply unrivaled.
“Using roasted vegetable broth, ten-hour caramelized onions, freshly baked baguette, and Swiss Gruyere, our onion soup comes alive after three full days of work,” explains Duhani.
Neither their Korean brisket tacos nor onion soup are cooked on the fly. Rather, they are the culmination of patience, hard work, and precise timing.
The same can be said for how Makky and Duhani’s partnership came to be.
“This wasn’t handed to us,” says Makky, whose restaurant resume includes managing Subways, working at his brother-in-law’s pizzeria, and assisting with his own family’s restaurant. “We worked hard for it. We grabbed it.” 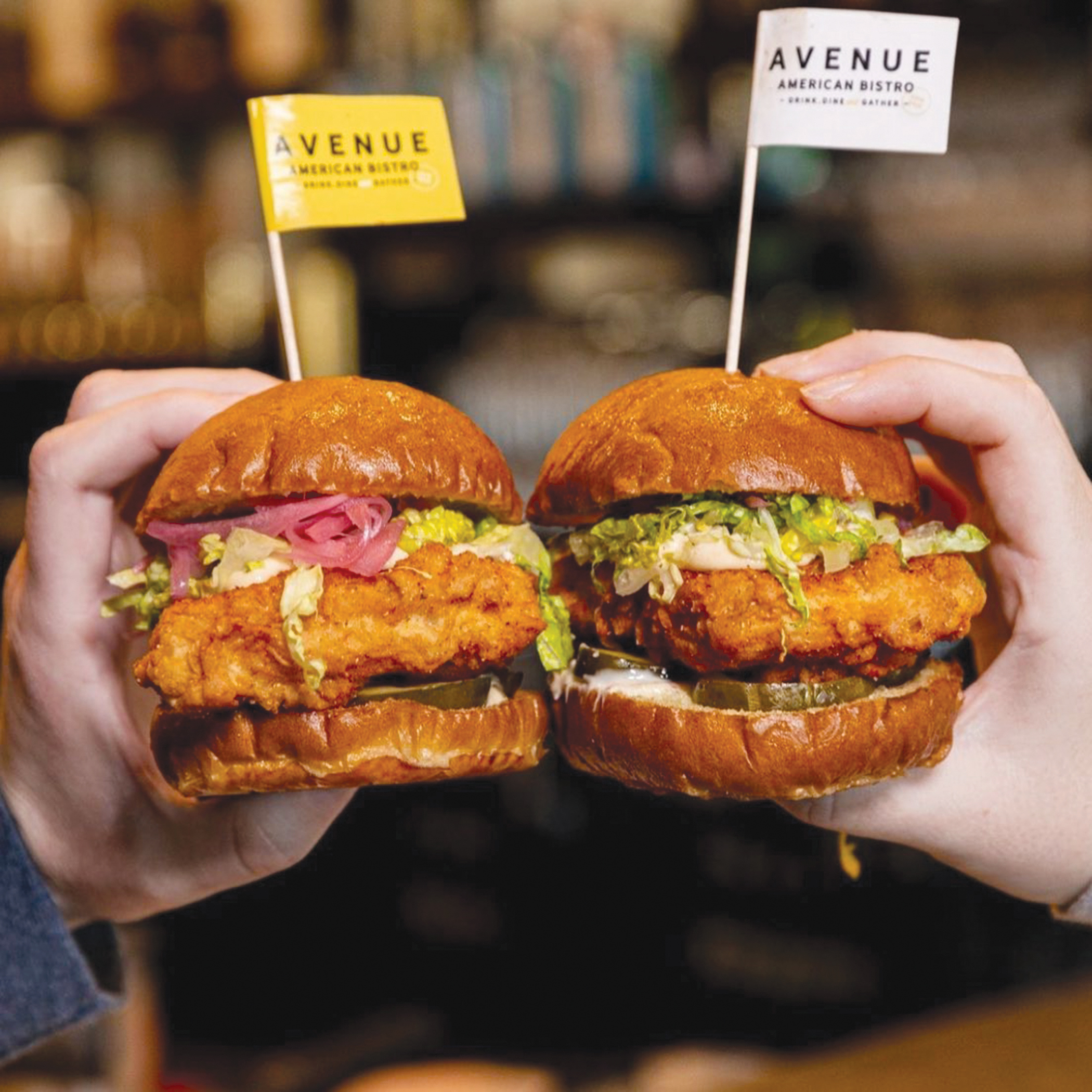 You can always get a great meal at the Avenue American Bistro in downtown Wayne.

Longtime Wayne residents may recall the history behind where Avenue resides today: Back in the seventies and eighties, the building housed The Golden Boy, a family dining eatery that became Rookie Sports Café in the nineties. By 2009, Makky, an entrepreneur who hails from Dearborn, had owned the hair salon and tanning establishment in the same building on the side which faced Michigan Avenue.
Meanwhile, a few blocks away, also on Michigan Avenue in Wayne, Duhani was engaged in his family’s business, L. George’s Coney Island. But he did not just work in the restaurant industry, he says he was humbly born in it.
“I was bred into this,” Duhani remembers of his younger years, back when his father owned a Coney Island restaurant in Detroit. “At nine-years-old, I was peeling potatoes.”
So, when he discovered that Rookie Sports Café was making its departure, he jumped at the opportunity to revamp the property.
“We said, ‘You know what? Let’s try something different,” recalls Duhani.
In May of 2010, Avenue American Bistro officially opened its doors after a process of intense renovation. And the rest is history.
Upon walking through the bistro’s doors today, one will find that it is the kind of place that keeps patrons coming back. The pristine, modernized décor fits the bill of upscale casual while managing to remain comfortable and inviting at the same time.
Duhani says that every diner’s experience—what a diner sees as well as what he or she tastes—is a testament to Avenue’s high standards and method of operation. It’s akin to the orchestration of a successful sports club: Everyone has got a particular job to do, and everyone’s a team player.
“Our staff here…You’ll never see someone standing around, hanging out, playing with their Apple watch,” says Duhani of the restaurant’s approximately 70-person staff. “We actually run a business here. And we give the jobs to the right individuals.”
“And cell phones are not allowed on our floor,” adds Makky.
“It’s mastering the basics,” says Duhani.
Makky and Duhani don’t just expect excellence from their staff, they lead by example. Ask the duo what they do for fun, and they will dole out an unyieldingly candid reply: “Not a damn thing,” Makky is quick to say. “You know why? Because we work 90 hours a week.”
“We’re here seven days out of the week,” says Duhani.
With the holidays now upon us, Avenue American Bistro presents the perfect atmosphere to eat, drink, and be merry with family, friends, and co-workers.
“We make our own simple syrup and our own bloody Mary mix, and all of our drinks are culinary-driven,” Makky boasts of Avenue’s exclusive array of cocktails including a Pomegranate Long Island. It’s also worth noting, here, that Avenue also infuses its Brazilian rum with pineapple, and they make their own ginger simple syrup with fresh ginger and organic demerara sugar.
Makky elaborates. “Dining here is an experience. From the minute you walk in, until the minute you leave, you are attended to and catered to until you reach the parking lot—and sometimes we follow you there,” Makky jokes. “The food attracts our guests,” Duhani says proudly. “And the experience keeps them coming back.” Avenue American Bistro is located at 3632 Elizabeth Street in Downtown Wayne. Online ordering is available via the restaurant’s website, avenuewayne.com. For reservations and other inquiries, give them a call at (734) 895-7300.