By : thewaynedispatch
Comment: Off
Tag: along with Wayne County Commissioner Warren Evans, City of Wayne Michigan, Commissioner Al Haidous and his family, unveil the new signage at Hype Recreation Center. 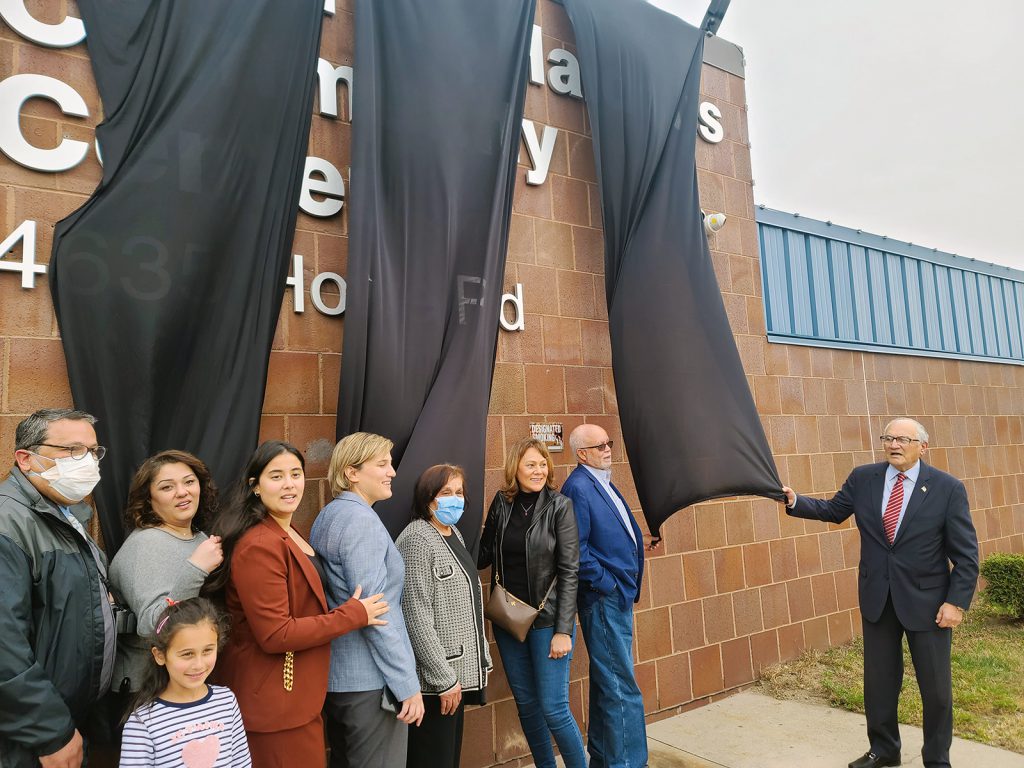 By Sarah Shurge – HYPE Athletics Center in Wayne has undergone many changes and updates over the last year and a half. Wayne residents and members will now notice the latest change; a new name, as a tribute and recognition to former Mayor Abdul “Al” Haidous’ 40 plus years of work and dedication to the City of Wayne.
“I’m honored. I can’t tell you how much I’m thankful to the people of Wayne. It’s where my story starts.” said Abdul “Al” Haidous, Wayne County Commissioner and Chairman of Board for Airport Authority. “I really feel I could not be successful in my career as a public servant without my support from the community in Wayne.”
Haidous moved to the City of Wayne in 1974 after he sold his restaurant in Monroe. He then opened Al’s Market at the corner of Howe Rd. and Annapolis St.
“My journey began when I moved to Wayne. I found myself in the middle of a family-friendly community.” said Haidous. “Everyone showed love, support, and trust. The whole community became like family to me and I treated them like my own family. It’s what made me who I am today.”
Right from the start, Haidous had a passion for the community of Wayne. He joined several community activists to construct a new community center. With support from residents and city officials, the Wayne Community Center was built.
Haidous personally worked and advocated to expand the center with racquetball courts and banquet facilities, then the ice rink and aquatics center.
“The building is set in the center of 70% of the population. It’s a beautiful building and provides good services, but it was too much for the budget in the city,” said Haidous.
Haidous served on the Wayne City Council and was elected Mayor in 2001 and served until 2014. During his time as mayor, there were lots of recommendations to close the center. Haidous didn’t agree.
“When you look at it from an economic viewpoint, a boarded building doesn’t look good in a family-friendly neighborhood,” said Haidous.
After being elected County Commissioner, Haidous stated he told the current Mayor of Wayne “whatever you do, don’t close the community center.” Haidous then continued to do what he could to keep the center open.
“Personally, I witnessed from 2014 his intentions on making sure the community center doesn’t close,” said Ali Sayed, Founder and CEO of HYPE Athletics. “He fought tooth and nail to make sure it didn’t close down.”
In 2014, Haidous was invited to a HYPE event and was impressed with how things were run. He invited Sayed to the Wayne Community Center and asked if a deal could be made to keep the center’s doors open.
HYPE began leasing the building in August 2015. In August 2020, Sayed began the discussion of purchasing the building from the city. The sale went through mid-July 2021.
“I feel like Al really is a champion for the City of Wayne. He’ll do anything in his power to make sure those residents have the best quality services,” said Sayed.
A year and a half ago Sayed presented the idea to the board to change the name of the building.
“Al played a vital role for the City of Wayne in providing the most heartfelt and sincere services for the city. He has this passion for the community. He deserved it,” said Sayed.
On Friday, November 11th, a ceremony was held at HYPE Athletics to honor Haidous with the name change of the building.
“Everybody there sincerely loves this man. Everybody there was a true friend of this man. There is not a single person there that even asked me “Why Al?” No one questioned it. Everyone was extremely happy,” said Sayed. “It was very emotional and touching. Everyone was overwhelmingly happy for this man.”
The celebration was accompanied by family, friends, elected officials that represent the communities Haidous serves, and so many more. Guest speakers included: Professor Tallal Turfe, Crestwood School Board Member Hassan Beydoun, Minister Troy Mohammad, and CEO of Wayne County Warren Evans.
“I was honored to see them name it, but I accept it on behalf of all the mayors before me and the citizens of Wayne, because without them I wouldn’t have earned that honor,” said Haidous. “They say ‘it takes a village to raise a child.’ It took the City of Wayne to raise a public servant like Al Haidous.”
Serving the people has always been Haidous’ main priority.
“Whatever I do, I ask the question ‘is that good for the people I represent?’ If the answer is yes, then I’m gonna do it,” said Haidous.
For years HYPE has been bringing the community positive and productive programs that have been changing people’s lives. HYPE Athletics is a non-profit organization that focuses on providing communities with drug-free, violent-free, and diverse athletic events and programs for kids and adults.
Many updates and improvements have been made to the building since HYPE took over. The aquatic center has been closed and a new fitness center is opened. The banquet facilities have been upgraded, along with the cafe being renovated. The parking lot was redone during the summer and hundreds of new members are signing up.
For more information about HYPE, visit hypeathletics.org or call (734)721-7400.