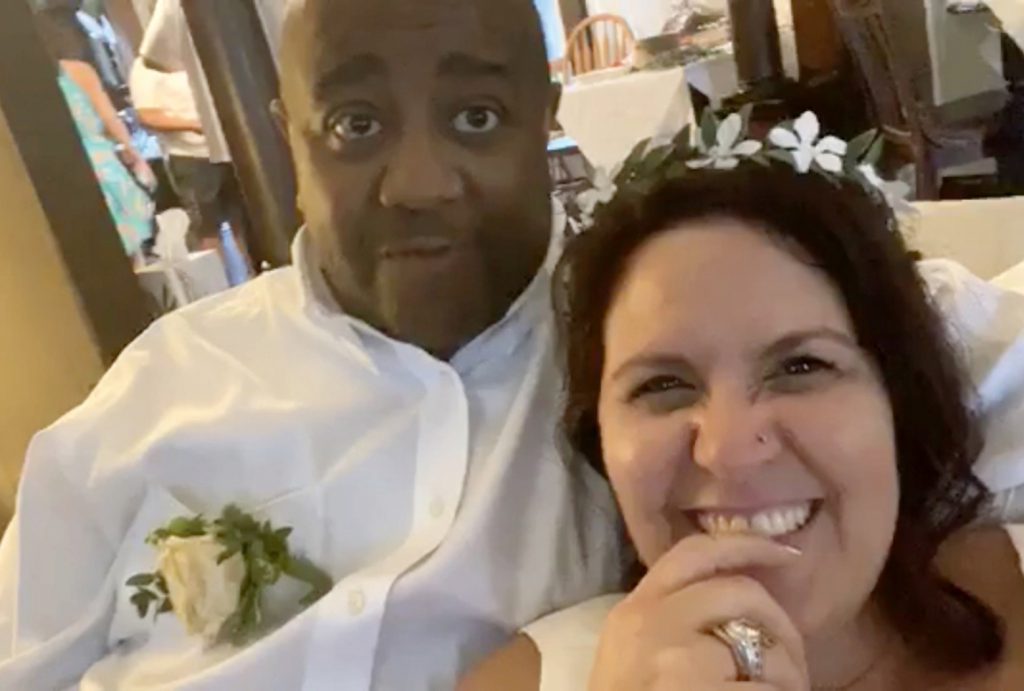 Antoine McKay and Michelle Guernsey on their wedding day July 18, 2020.

By Carolyn Marnon – He met his sweetheart in high school, but she wasn’t his high school sweetheart. It took 30 years for Wayne Memorial High School alumni Antoine McKay and Michelle Guernsey to reconnect. Now they are on a journey to bring Wayne more recognition as the fabulous hidden gem that it is.
While attending WMHS, the two were involved in choir, forensics, student council, and theatre together. After high school, each went on to pursue different careers.
Michelle, whose grandfather designed the City of Wayne seal, attended Wayne State University before getting married and having kids. She found her way back to WSU where she earned a bachelor’s degree in Dance Education. She went on to teach a creative dance lab. After further education, Michelle found herself at Burger School in Garden City teaching special education. She eventually got a Master’s Degree in Special Education and also earned Trauma Grief Certificates. To fuel her creativity, Michelle started a stained glass mosaic business. She has taught classes at Helium Studio in downtown Wayne numerous times.
Antoine received a scholarship to study at Eastern Michigan University where he took classes in imaginative writing and written communications. From there, he went to New York to act and do a few other things. He has appeared in over 20 shows on Second City’s Main Stage, both in Detroit and Chicago. He has had roles on Detroit 187, ER, Prison Break, The Weatherman (with Nicholas Cage), Someone to Eat Cheese With (with Jeff Garland) and so much more. His largest role you might know of is as Bunkie Williams on the Fox show “Empire.”
The couple reconnected at a Champions of Wayne program being held at the State Wayne Theatre on September 25, 2019. “The more we got to know who we are now, we were checking boxes off,” Michelle said. Because Antoine lived in Chicago where he has owned a theatre for the past three years, the pair had to commute if they wanted to see each other. She would drive to Chicago or he would take the train here.
Michelle decided it was time to stop teaching. She was doing well with her stained glass business. April 30, 2020 was going to be her last day at Burger. Before she could get to that date, COVID-19 hit. She made the bold decision to travel to Illinois to hunker down along with Antoine.
They hold hands. Their steps when they walk are in sync. They declare their love for each other and their unique traits: intelligence, humor, giving, generosity. They’ve been newlyweds for almost five months after marrying in July 2020. 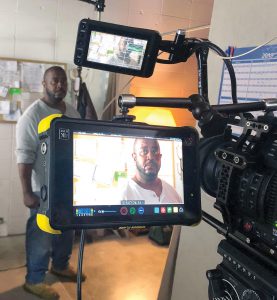 Antoine McKay recently starred in the short film ‘Unclaimed’ that was shown during a recent virtual fundraiser for Champions of Wayne.

Although they still have a home in Chicago, they decided to live here in Wayne also. Antoine said they are settling here because it’s “where we were awarded and afforded so much.”
“It’s so important to pour into the socio-economic. Wayne poured into us and now we can pour back into the community. I felt special when I was here, and we want to give that back to the community,” said Antoine.
How are the couple pouring back into the community? They formed Chelletoine Productions to explore life through the arts. Their first project is “Michelle S. Bitts, Ph.D.” which they are filming in Wayne. The show is about a psychologist who, over the course of the season, is going to devolve into needing one of her own. The title of the show is a word play on Michelle’s stained glass business “Michelle’s Pieces.”
How did the show come about? Antoine said a friend who is based in Los Angeles, told him that the networks were dying for content right now. “Right here on this porch,” he says, “we got the idea, and we started writing.” The show has aspects of mental illness in it. “We want to normalize it (mental illness),” said Michelle. Actor/comedian Robin Williams, fashion designer Kate Spade, and chef Anthony Bourdain struggled with mental illness before taking their own lives. The McKays want to spread the word about mental illness, the ideas behind it, the language associated with it, so people become more comfortable talking about it.
The pilot episode was filmed with mostly a “green” crew. Antoine said these crew members had never worked on or done a play, much less a TV show. They are trying to use as many people from Wayne as they can or else Michigan actors and crew on the show. They want to use everything they can from Wayne, as far as that is possible.
Production spent two days at Helium Studio, shooting a farmer’s market outside. Scenes were also shot outside the Wayne Historical Museum and inside US-12 Bar and Grill.
When we spoke, Antoine and Michelle were writing episode 2 which they planned to start shooting over four days beginning December 9. The McKay’s are taking safety precautions for all involved. Daily temperature checks, COVID tests and a nurse on set are part of that.
Before Antoine came back into her life, Michelle’s “performances” were strictly as a mosaic teacher. After reconnecting with Antoine, she made an appearance in “The G,” a TV series filmed in Gary, Indiana currently on Amazon Prime. She plays a woman at a rally while Antoine plays Councilman Battle. In the series, a man returns home from prison to pick up where he left off, controlling all the criminal activity in the city. “She has stepped into this world and her art,” enthused Antoine, “Her performance, it’s just beautiful, and she fits right in.”
What’s in the future? Antoine is busy organizing the Wayne International Independent TV and Film Festival. There is a similar festival in New York to what he has planned for Wayne where, he says, $10,000 is spent in a week in New York City by people attending the festival. He believes $1.5-2 million could be injected into the City of Wayne with his projects. “We’ve gone through what we’ve gone through for it to be what it needed to be,” said Antoine. “I’ve been so blessed to act and teach around the world.”
Besides the financial effects of the projects, Michelle stresses the cultural benefits. They want to enhance lives, create hope, and give the Wayne community a foundation to build from. “Our goal,” said Antoine, “is to create a production-based entity here where we use all the attributes of Wayne. It’s a great city. We’re introducing creativity and fun back into the community.”
“Build on creative energy,” added Julie.
“It becomes more of a destination than just a place,” concluded Antoine. Wayne as a destination is a fine idea indeed.