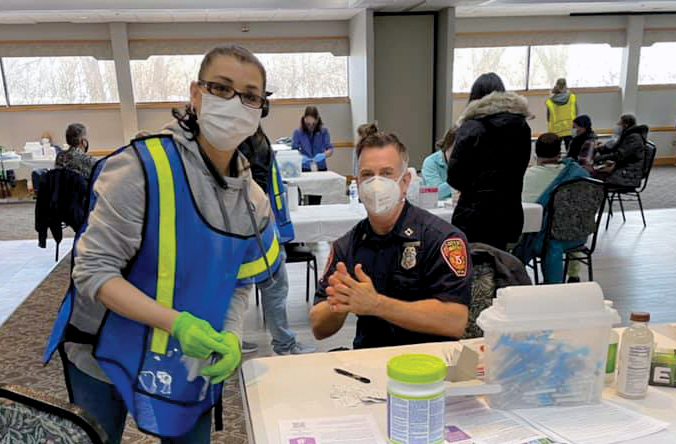 By Carolyn Marnon – 400 City of Wayne residents were able to receive their first COVID-19 vaccine on Friday, February 26. Wayne County held a vaccination clinic at HYPE Recreation Center in Wayne. Residents age 65 and older were eligible for the shots, which happened to be by Pfizer.
John Dasho called the City Clerk’s office when he heard about the vaccines being given in Wayne. His name was put on a list that was sent to Wayne County. A Wayne County employee called him to set up his HYPE appointment. About the vaccination clinic, he said, “The people there were so nice, from the helpers to the EMT. All in all a great experience.”
Patricia Spaw indicated she had to spend some time waiting outside, but the sun was out and the temperature wasn’t too cold. She said there were chairs available for those who needed them and thought everything was well-organized. She will be returning in three weeks to get her second dose.
Sharon and Ira Bunek arrived at 10:00 a.m. for their shots. While waiting in the line that went out the doors, they chatted with fellow Wayne seniors in line. After checking in, they were put in a line for the vaccine which, Sharon said, moved rather quickly. “All the staff from Wayne County and the City of Wayne were very helpful, and I was surprised to see many City of Wayne employees serving as volunteers in one role or another. We received our vaccine around 11:00 a.m. then went to the wait room for 15 minutes to be monitored for vaccine reactions before leaving. We are scheduled to return for the second dose on March 19.” Sharon shared that in the last six weeks, they have tried to schedule vaccines with Garden City Hospital, Meijer, Rite-Aid and a few health care organizations, all to no avail.
“We were so pleased to participate in the first vaccination clinic for the City of Wayne and very grateful to receive the vaccine. We were also pleased that we could obtain this vaccine and the next one right here in our own city,” said Sharon.
Wayne Police Chief Ryan Strong stated that he will share any future vaccine opportunities he becomes aware of with the City.

Planning for the future of Wayne