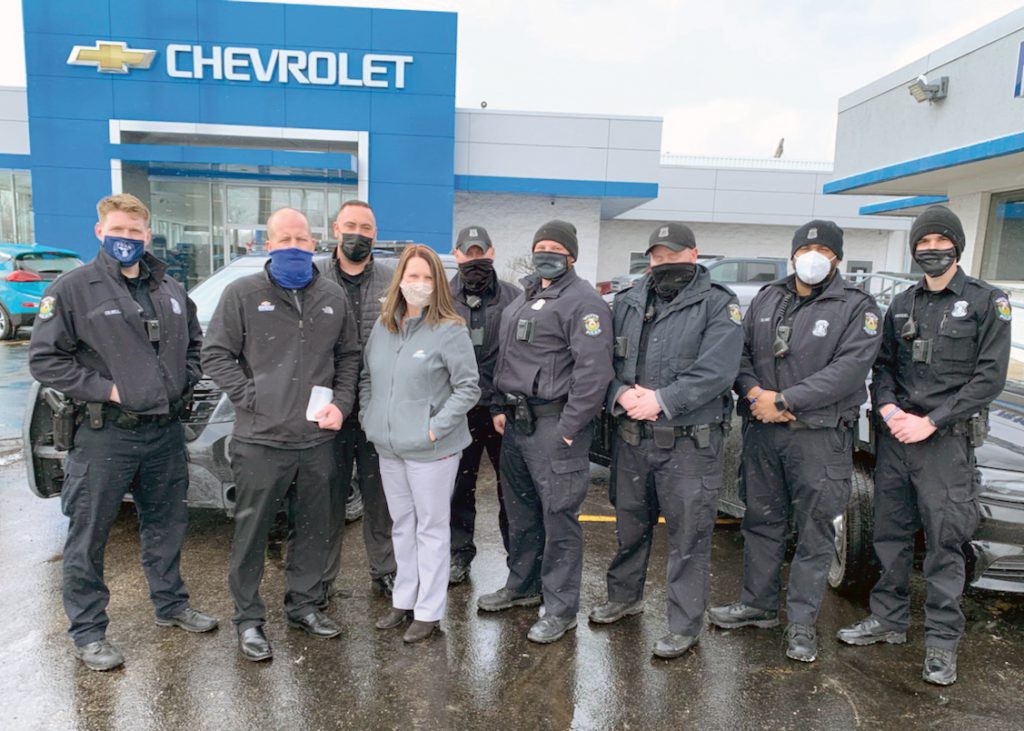 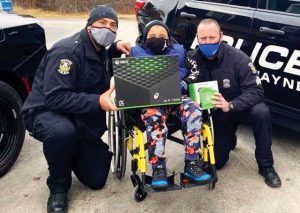 City of Wayne Police Officers Kyle Talmage and Sgt. Abe Hughes present DJ with a X-Box this past Christmas from the Police Unions.

By Carolyn Marnon – On September 12, 2020, officers from the Wayne Police Department were dispatched to the area of E. Michigan Ave. and Fourth St. in the City of Wayne for a serious injury accident. Officers arrived on scene to see that an SUV had collided with a tree in the center median.
Officers immediately began to render aid to the individuals in the vehicle. One of the occupants was 7-year old DJ. DJ and his dad were headed to the Henry Ford Museum to see the special Marvel exhibit. Little did anyone know at that time, but DJ’s life would forever be changed that day.
DJ was rushed to a local hospital. Unfortunately, he was left paralyzed from the waist down as a result of the crash. DJ spent the next three months at the University of Michigan Motts Children’s Hospital.
Over the next couple of months, DJ’s mother, Lindsay Vierk, would give frequent updates to the Wayne officers on how he was doing. As Christmas soon approached, Lindsay was hopeful that DJ would be able to be released from the hospital and be able to spend Christmas at home. With a little holiday season luck, DJ was discharged from the hospital just two weeks before Christmas.
As one can imagine, a three month stay in a hospital meant that the bills were building up quickly. Due to the COVID-19 pandemic, Lindsay had recently lost her job just before this incident. Lindsay did what she could to make ends meet. Insurance only covered so much, but that did not stop Lindsay from making sure DJ got the best care.
Officers from the Wayne Police Department were extremely touched by DJ and his story. The officers at the police department wanted to make sure DJ and his mother had a great Christmas. They wanted to be able to take their minds off everything they had been dealing with for the last few months, even if only for a little while.
Both the Patrol Officers Union and Command Officers Union adopted DJ and Lindsay for Christmas. Officers presented the Christmas surprise to DJ and Lindsay on December 22, 2020. The two of them were overcome with joy and gratefulness!!!
While at the home of Lindsay and DJ, officers observed that Lindsay drove a Ford Taurus. While speaking with Lindsay, officers asked how she was able to transport DJ around in her vehicle with his wheelchair. Lindsay told the officers that she had to wheel DJ as close to the vehicle as possible, lock the wheels, pick him up and then carefully place him in the vehicle. Lindsay told officers that she inquired with the insurance company about some type of assistance with outfitting a vehicle with wheelchair equipment. Lindsay was told that because DJ was not a paraplegic, the insurance company did not cover vehicle equipment for DJ’s type of injury.
The officers left that day knowing that they had to step up and do what they could.
The officers immediately started working with the owner of Road Runner Auto Sales, a local dealership in the City of Wayne. The search began to find Lindsay a practical vehicle that she could transport DJ around in. Road Runner Auto Sales quickly located a used handicap van with wheelchair accessibility.
The Wayne Police Officers Association and the Wayne Police Command Officers Association set up a gofundme account and asked for the public’s assistance in purchased the $9500 van. In just three days, the funds had been raised to purchase the vehicle. The vehicle was recently presented to Lindsay and DJ at the Wayne Police Department.
Wayne Police Chief Ryan Strong shared, “I am very proud of what our officers did to help DJ and his mother. Going above and beyond to help the community are part of what makes the
Wayne Police Department is such a great place to work.
“The traffic crash was a life changing event for DJ and his mother. I hope the van will make life just a bit smoother for DJ and his mother. It is important to remember that officers are human beings. Dealing with events like this traffic crash can be difficult for officers. Our department has built a strong bond with DJ and his mother, which has helped in the healing process and brought joy to all of our lives.”
Lindsay Vierk told Click on Detroit news, ““I want to say thank you to the Wayne Police Department. They have blessed us, and I just want to say they will never be forgotten.”
The majority of information for this article was taken from the gofundme account set up by the Wayne Police Officers Association and the Wayne Police Command Officers Association.