Reaching for a star 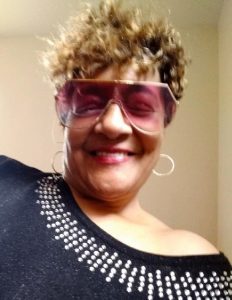 “Maybe it’s time for me to shine a little bit,” Trudy Ellis said. As a senior citizen Ms. Trudy, as she likes to be called, has been digging into the treasure-trove of creativity that God gifted her with and seeing where it leads her.
Last year, she designed a logo for a Detroit t-shirt that read “Detroit’s Coming Back.” Ms. Trudy said AKA Custom Apparel in Wayne sells t-shirts and hoodies with the logo “Just Having Some Fun in Downtown Wayne.” As a resident of Wayne, she wants to have fun and promote the city she calls home.
Writing jingles is another of Ms. Trudy’s talents. She says she writes little ditties for various businesses. “I have a gift of singing also.”
She shares that gift on You Tube with a song she wrote called “King of Pop,” an ode to Michael Jackson. She said it was a tribute from Detroit to Michael. She felt there was so much negativity around Michael, so she wanted to do something positive. Ms. Trudy wrote the words and then she contacted various musicians to help her record it. Joey Welz, a pianist with Bill Haley and His Comets in the 1960s, collaborated with her to put music to her lyrics and produced the song for her. Joey is from Trudy’s hometown of Lipps, Pennsylvania. She had heard about him, so she communicated with him online through his Canadian American Records.
You can listen to the song by going to YouTube and searching for Ms. Trudy King of Pop. It is a dream of Ms. Trudy that one day Michael’s mother hears the song and contacts her. “Maybe one day Mrs. Jackson will hear my song. I’ve got over 2000 viewers on that song.”
“I’ve always been a Michael Jackson fan,” she said. “I wrote it (the song) because I thought it was a very true and meaningful song.” 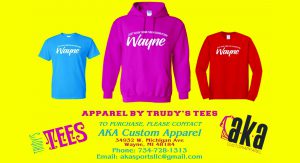 Trudy raised five children in Detroit before moving to Wayne. “I have no regrets. I can pat myself on the back. I feel I did a pretty good job.”
“Music is like a hobby to me. The t-shirts are a hobby to me. I was born with the gift of creativity.” She enjoys doing art, designing, and working on collage. “I do my little collages.”
I do some things that are pretty nice. God gives me the knowledge to do collages. God gives everybody a gift to do something. He gave me a gift of music and the gift of creativity and drawing, doing collages. But I thank God for this one gift he gave me: the gift of caring for others, the gift of sharing with others. From when I was a little girl, I had the knowledge to share. It’s good to give to people. I don’t think I have any selfishness in me when it comes to caring and giving.
She says she gives money to people at the gas station who say they want food. “You never know what someone’s circumstances are.” After she gives them the money, she said “if they don’t spend it on food, it’s between them and God.” It’s out of her hands.
In dealing with people, she said, “If I can’t get along with them, I keep moving. If you can’t get along with someone, go on to the next person. They might be the blessing for you.”
About reaching out for your goals and dreams, Ms. Trudy said “If you try, it’s better than not trying. Nothing beats a failure but to try. If you at least try, attempt to do something. It’s like taking three steps and having God lead you the rest of the way.” She continued, “Some people wait for God to do it all. They want it to all go their way. I’m a firm believer that when I ask God for something, I don’t wait until I am all bent out of shape. I go to God on a daily basis. I thank him every day for the little things. God will prepare you for the greater things in life in the future.”