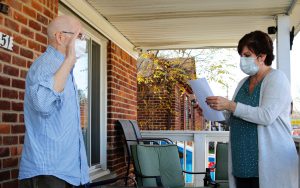 Mayor Pro-Tem Tom Porter was sworn in at his home by City Clerk Tina Stanke.

By Carolyn Marnon – He started feeling bad on March 24, the day Michigan implemented the stay-at-home order for all residents due to the coronavirus. It wasn’t until two weeks later that Wayne City Councilman Tom Porter was able to “see” his primary physician via a video appointment. He didn’t have any of the symptoms associated with COVID-19, the virus that was sweeping the country and the world and the reason for the state lockdown. The doctor prescribed antibiotics. Not yet returning to health, Porter had another video appointment with his doctor and was referred to a rheumatologist with whom he had yet another video appointment. That doctor prescribed him steroids because Tom’s feet began to swell up. By May 6, about a month and a half after falling ill, Porter had lost 15 pounds and still had not been examined by a physician in person.
Tom says he was lethargic and so tired he could barely walk. Because of COVID, doctors weren’t seeing people in person. On May 7, Tom went to the Emergency Room to see a flesh and blood doctor in person. He was advised to go see a different rheumatologist. His primary doctor sent him on May 8 to get a CT scan and an x-ray. The scan and x-ray didn’t indicate any problems. A few days later, May 11, with prescription in hand to get a COVID test, he was denied the testing because he didn’t have a fever. On May 12, he was able to get tested at another facility; the test was negative.
“It was very emotional for me,” Tom recalls. “I didn’t know where I was at. I didn’t know what was wrong with me. How was I going to get diagnosed?” He began reading “Dr. Google” like many tend to do when trying to figure something out. He says his research led him to believe he had cancer, but no one had yet diagnosed him with it.
Aggravation was coursing through Tom’s veins. His feet were swollen. His lymph glands were swollen. The guessing had to stop. “I need someone to diagnose me,” Tom pleaded. An infectious disease doctor physically examined him, told him he had nodules and swollen lymph glands and sent him for another CT scan (13 days after the first one). The results came back on May 26. “Not good at all,” said Tom. Two days later he was seeing an oncologist who referred him to a surgeon who did a biopsy on his neck on June 8. It had now been two months, and Tom was still waiting for a diagnosis.
June 17. Two months and 24 days after falling ill, Tom finally had a diagnosis, albeit not a good one. He had non-Hodgkin’s lymphoma large B cell stage 4, a cancer that originates in the lymphatic system — the disease-fighting system that spreads throughout the body. He had cancer in his liver and both lungs.
Frustration. It should have taken a month at the most, Tom says, to diagnose. Certainly not 89 days! The terrible delay because of COVID had him depressed. “I thought they wanted to kill all us old people!” Tom credits the infectious disease doctor who made the diagnosis possible.
A bone marrow biopsy soon followed. It was negative. A PET scan ensued which uses a dye that highlights different cancer points in the body, according to Tom. His abdomen, chest and neck were checked to see where the cancer was located and how bad it was. There were a lot of tests being done.
And then another bombshell. A heart issue was discovered. His heart was only putting out 32% blood volume when the minimum that should be pumping through is 55%. Doctors want to see 75%. Medication is now regulating Tom’s heart until he is done with chemotherapy. Cancer eradication is the first priority. Once it’s in remission, a stent will be put in to address the heart issue.
A port was installed with a small incision in Tom’s chest to start chemotherapy. He says there is a plastic hose that goes into a blood vessel. The port will stay in until he is done. It gets flushed out every now and then to keep it clean and clear. This method is preferred over trying to stick needles in him every visit.
The first “primary” chemo treatment, he got there at 8:00 a.m. His blood was drawn and then it took an hour for everyone to look at the results, get him pre-meds and Tylenol and feed him 4-5 bags of differing lengths. By 3:30 p.m. Tom was tired of sitting. 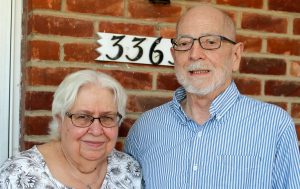 The next “secondary” treatment a week later wasn’t so bad. He was asked if he minded getting a shot instead of a 2-hour chemo bag. It took just six minutes for the chemo to be pushed into his belly fat with the shot. He has had some fever issues that, in his opinion, he thinks are triggered by the chemo.
What does Tom do while he undergoes chemo? He takes his iPad and his phone with him. He does research. During a recent treatment, he wrote emails to Senator Dayna Polehanki and Representative Kevin Coleman about a bill being considered that would allow a councilperson to remotely attend an in-person meeting if they have a critical illness and their health would be undermined by being there in person. He asked them to please consider voting for it. At other times, he says he has reclined and dozed off. “Sometimes, I just sit there and daydream.”
The community has rallied around Tom in his time of need. “I’m a very strange person sometimes. I don’t like people doing things for me.” He might not like people doing things for him, but people like doing things for Tom. A friend brought him apple cider and donuts after a visit to a cider mill just because that friend thought Tom would enjoy it. The Wayne Police Department sent him a card which all the officers had signed. His daughter-in-law does all the grocery shopping for him and his wife, Bonnie. He was gifted with a 14-day subscription to Mom’s Meals, fully-prepared refrigerated meals. His neighbors will stop and talk to him if they see him in the yard and ask how he is doing. He’s received numerous cards and letters. He’s had other offers of rides and meals. “It’s overwhelming to me. There’s all kinds of great people in this city and everywhere that are offering me almost anything.”
What’s in the future for Tom, a beloved member of the city council for his candor, willingness to listen and to research difficult topics? “I want everybody to understand I love this city, and I love the people in it, and I want people to understand what I am doing and why I am doing it,” Tom says about his recent run for city council on the November ballot. He said before the election, “Since I’m unopposed, I’m probably going to be re-elected. I’ll go with the flow.” Tom was re-elected and the council voted to keep him as Mayor Pro Tem. Tom admits he can resign the position if he needs to, such as if he is not in remission and can’t attend meetings if they return to in-person meetings at City Hall. April 26 was the last day he could pull his name from the ballot. He wasn’t diagnosed until over a month later at which time, he couldn’t take his name off the ballot.
Tom has been open about his cancer on city council. At one of the council meetings, a number of City Council members donned Team Porter t-shirts. The t-shirts were designed by Tom’s granddaughter-in-law. She went to the local t-shirt shop near her home in Pennsylvania and had shirts with Team Porter and a ribbon imprinted made for the family. Extended family members soon wanted the shirts. Friends and neighbors bought them too. “It just went crazy,” Tom says with amazement.
Talking to people face-to-face is important to Tom. He wants to see people and hear their viewpoints.
His primary chemo treatments lasted about four hours and the secondary treatments a week later are less.
Chemo doesn’t bother him. He reports no nausea. He has had some fever issues and other side effects that bother him, but “I’m working my way through them.”
Tom and Bonnie stay home most of the time. “Any cold or infection could kill me quite easily.” He had been looking forward to December 17 when his 6th and final chemo treatment would be done. His oncologist had been impressed that nothing was showing up on Tom’s liver scans and the nodules in both lungs had reduced in size considerably. He said at that time, “The whole thing for me is to get through the chemo, get 100% remission and then get the stent and get the heart fixed and then monitor the cancer to make sure it doesn’t come back.”
And then last month, Tom got sick after completing three chemo treatments. He was diagnosed with a rare form of pneumonia and a viral infection. He spent 16 days in the hospital.
On November 22, Tom said it was like somebody had flipped the switch. The fever, aches and pains, had all fallen away. He started gaining weight back. Everyone was happy with the progress he is now making.
Tom is waiting on insurance approval for another PET scan which he hopes to have December 16. If cancer is found, he will get a reduced amount of chemo three more times. If it shows no trace of cancer, he will have no more chemo treatments. He will just be monitored to make sure the cancer doesn’t reappear.
Tom is staying positive.

Reaching for a star 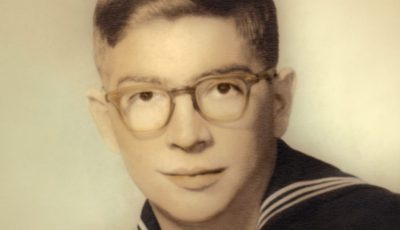 Events honoring our veterans in Wayne this month