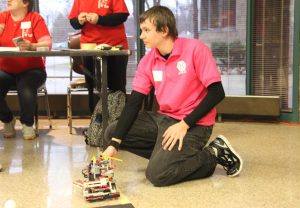 The William D. Ford Career-Technical Center hosted Robofest 2017 Little Robots, Big Missions on March 30, 2017. The competition consisted of two rounds.
In Round 1 each team used a fully autonomous robot to play a game called RoboHit. In the RoboHit game the robots are programmed to locate and hit a ping-pong ball resting on top of a water bottle, using a pencil as a bat. Teams earn points when they remove the trash objects, the Lego blocks from the bases and return to the home base to stop. There is a two-minute time limit.
Round 2 was called the unknown problem and the teams had 30 minutes to reprogram their robot to fix a problem.
The exhibition competition gave each team a chance to show off their creative autonomous robotics project.
Participants included teams from John Glenn High School, Wayne Memorial High School, William D. Ford Career-Technical Center, Northville High School, Battle Creek, Novi, Troy and Walled Lake.
The Northville and Battle Creek teams will advance to the state competition.
Robofest is Lawrence Technological University’s international autonomous robotics program for students in fourth through twelfth grade and college. Student teams design, construct, and program their robots to act independently and compete for trophies in a variety of competitions.
Robofest’s mission is to generate excitement among young people for science, technology, engineering and mathematics (STEM), develop creativity and problem solving skills, and prepare them to excel in higher education and technological skills.
For more information on Robo-fest, visit www.robofest.net.