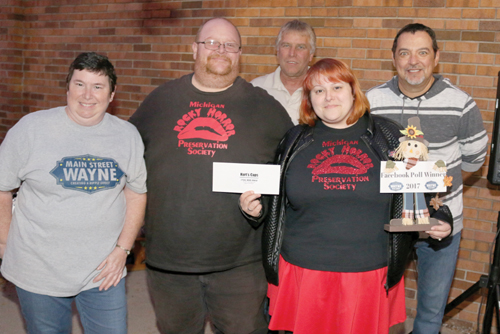 By Carolyn Marnon – “Don’t Dream it, Be it!” was the theme behind the Michigan Rocky Horror Preservation Society’s scarecrow submission for Wayne Main Street’s annual Scarecrow Show on Michigan Avenue and Wayne Roads. The scarecrow received 509 likes during Facebook voting last month. The Transylvanian is a background dancer in the castle during the Time Warp. It isn’t a specific person; the MRHPS got creative and came up with a unique character for their scarecrow. The lips on the face are VERY intentional. For their hard work, MRHPS received the Facebook Poll Scarecrow Award.
There was also a People’s Choice Scarecrow Award that went to the scarecrow that received the most in-person votes during the annual Scarecrow Reception held October 19 in Derby’s Alley.
What and where is Derby’s Alley? Derby’s Alley is the space between G. I. Surplus and Flagship Boutique along Michigan Avenue. It is a space that Wayne Main Street, in partnership with the City of Wayne, is turning into a pocket park/gathering space. The name is in reference to the history of Wayne being once called “Derby’s Corner.” Ezra Derby was one of the founding fathers of the Village of Wayne in the 1800s.
Those who attended the scarecrow reception were greeted with long tables and seating to enjoy the free cider and donuts that were provided courtesy of Dexter’s Cider Mill. The first 250 people who voted for their favorite scarecrow received a free hot dog from Heavenly Hot Dogs. There was live music and corn hole for entertainment.
What was even more beautiful besides the corn stalks and festive décor? The weather! It was a wonderful 70 degrees while visitors sat around tables brandishing fall floral centerpieces, conversing with neighbors while not wearing coats.
No one was rushing off to get back home where it was warm. The area was so full of people that seating was hard to come by. Attendees were waiting in line to cast their votes.
Wayne Main Street Treasurer Cindy Schofield enthused, “Have to say the cider and donuts were amazing. Thank you, Dexter Cider Mill! People who said they weren’t cider lovers asked for seconds!” 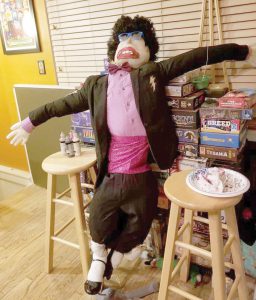 Rocky Horror Transylvanian relaxes before heading out to its pole for the annual Scarecrow Show.

At the end of the evening, the People’s Choice winner was announced: S.T.E.P. Thrift Store. They created their scarecrow using lamp shades for a skirt and fall florals as hair. What a shining example of a winner!
Each winner received $100 sponsored by Kurt’s Caps.
Although the scarecrows have left Wayne for the season, it’s not too early to start thinking about how you can create a scarecrow for next year’s Scarecrow Show and start finding those little extras that will make it truly amazing.