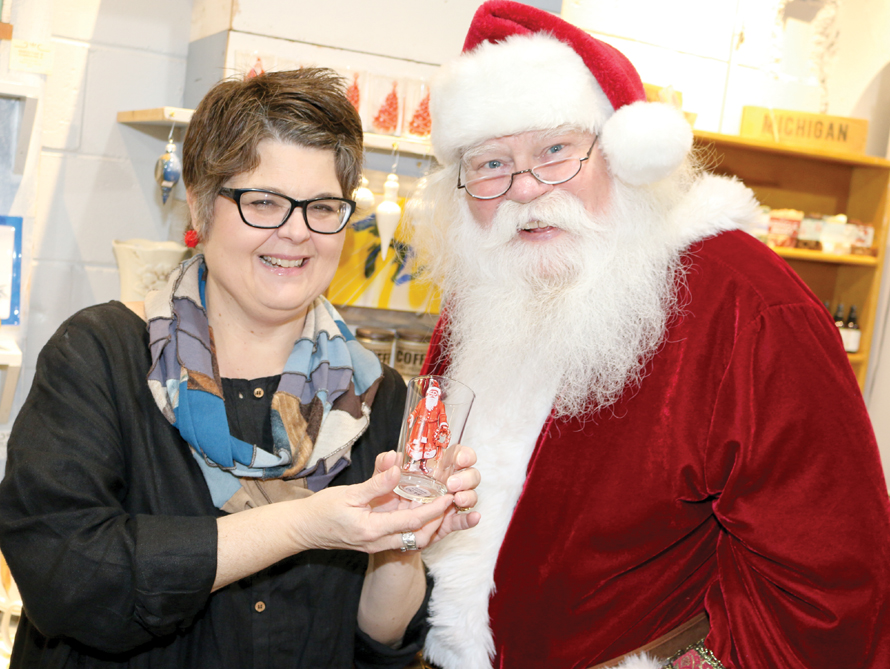 Kim White-Jenkins welcomed Santa to her shop, Helium Studio, when he was in Wayne recently.

It all started with a post on Facebook that had Wayne resident Jamie Butts venting her frustration about how the Kroger at Michigan Ave. and Merriman Rd. had thrown almost all the worldly goods a homeless man had into a dumpster. The homeless man, Gordon, had been living behind the Kroger and Subway for the past 7 years in a makeshift shelter with a tent that protected him from the elements and gave him a place to rest his head each evening. “I always knew where to find him,” wrote Jamie.
Her November 8 posting read, “I’m so heart broken and LIVID right now! Most of our community knows of Gordon. The sweetest most polite homeless man I know around here. Well I just saw him at our Walgreens and he told me that Kroger kicked him out of the back of the parking lot where he was staying. They threw out ALL of his stuff!!!!! His blankets, his tent…. everything! Gordon has nothing but his backpack and his bike! I’m trying along with Gina Baker to do everything we can to help him! I just had to vent, how heartless people can be!!!!!?!!?”
Many good-hearted people in Wayne came together to offer help in whatever way they could—coats, blankets, boots, warm gloves, tents, food-whatever might help him through this unfortunate time. Brian Fleming took Gordon with him to Thanksgiving dinner. “We like him,” Brian said. “He always has a smile and is gracious.” Several commented that they knew Gordon and expressed what a nice guy he was despite his homelessness. Jamie and former Wayne resident Gina Baker have looked after Gordon for several years after having formed friendships with him. Gina says he has been to her house for family dinners on holidays, and she once demanded that he sleep on her couch because it was super cold one night.
Jamie tells the story of meeting Gordon at Walgreen’s one winter. It was cold; he was sitting outside. She asked if he was okay and offered him $20. He turned it down, asking if she had just $5 so he could get a sandwich. She let him sit in her car for the next 45 minutes to get warm while they got to know each other. Even now, when he sees Jamie, he asks how her 7 year old son is.
Twiniece Jones helped get Gordon a government phone to use. Jamie gave him her phone number. Michele Curtis, who works for the Veterans Administration (VA) investigated what she could do for Gordon.
Employees at the Palmer House in Westland were able to get Gordon a motel room at the Mona Lisa in Inkster after his “home” was dumped. Gordon would come around and help clean up and do odd jobs at the Palmer House. Palmer House wrote “Gordon is a beautiful person and a hard worker. He shows up everyday to help with our parking lot and patio, garbage, etc. Many times, he comes early in the day and asks for an advance, and he always shows up that night to fulfill his commitment.”
Wayne residents answered the call and donations came in to pay for additional nights at the motel. The motel helped by upgrading Gordon to a larger room after the first few nights. Jamie took photos of receipts and sent them to the donors to show how their money was used.
“I have once again gained faith in humanity and see there are still good people out there with hearts of gold!” wrote Jamie on the new facebook group Helping Gordon that she set up. “He was ecstatic,” she said when she informed him of the additional nights at the motel. “He cried once we went outside and told me that all these people are his guardian angels!”
Jamie reported that Gordon was eventually able to get VA paperwork done. The VA picked him up from the motel at the end of November to take him to a new VA shelter in Detroit. They will take care of him while he is on the waiting list for housing. They are also helping him get his license reinstated and getting his VA benefits going. In the meantime, Jamie is storing anything Gordon was not able to take with him to the shelter.
“He was in really good spirits and wanted me to tell everyone thank you so much, and he appreciates everything that everyone has done for him,” wrote Jamie on Helping Gordon. “He’s excited for this chapter in his life and knows that our community had a big hand in him taking these steps. He’s going to call me when he gets to the shelter and settled in. I’m so happy for him and so proud of our community!”
Jamie also noted, “Gordon is a very sweet and kind man that a lot of people who have interacted with him knows this. I’ve been looking out for Gordon for over a year now. Some people just want to be negative while others have love and compassion for someone who is struggling. For those that have prayed, checked in on and helped Gordon, I thank you from the bottom of my heart!”