Soaring with the Blue Angels 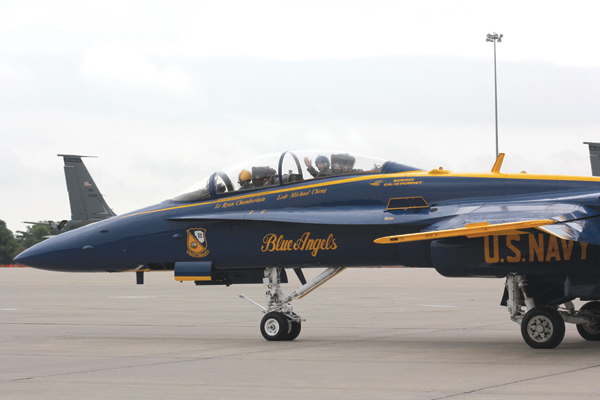 Wayne Memorial principal Kevin Weber waves from the plane before his flight with Blue Angels at Selfridge Air National Guard Base.

By Cierra Eschenbacher – Wayne Memorial principal Kevin Weber went flying high this September when he had the opportunity to go on a stunt-filled ride with the famous U.S. Navy Blue Angels in one of their F/A-18 Hornet planes.
After being approached by a representative for the Blue Angels, Weber was selected to be one of three special guests who was able to take to the skies with Lieutenant Ryan Chamberlain.
Weber flew with the Blue Angels on September 2 at Selfridge Air National Guard Base, where they were in town for an air show.
With an average roller coaster reaching about four G-Forces, a Blue Angels Hornet can reach up to seven. That is the equivalent of around 1,100 pounds of pressure pushing blood out of a person’s head. With forces like that, it is mandatory that flyers learn a specific breathing technique called the “Hick Maneuver.”
In order to prevent loss of consciousness (a condition endearingly referred to as G-LOC), the “Hick Maneuver” is a tightening of the leg muscles, taking one deep breath, and then taking a multitude of quick, tight breaths in order to compress the diaphragm muscles while ascending.
Weber said that he not only studied the breathing techniques, but also watched videos of other people in the planes in order to prepare. “It was an incredible experience. There is no way to describe the feeling to people,” Weber said of flying with the Blue Angels.
While Weber mastered the Hick Maneuver for most of his ride and never felt sick, he said that he was so impressed with the stunts that he momentarily forgot the breathing and muscle tightening and passed out.
“I don’t think I will ever forget taking off or getting G-LOC,” Weber said.
Local 4 News made an appearance at the air base to interview Weber and the other guests, who were presented with plaques by the Blue Angels.
Would Weber ever go back up if he had the chance?
“I would definitely want to do it again,” Weber said. “I would want to conquer the air-to-air maneuver that I passed out during.  I would want to take on the G-Monster and win.”
Editor’s note: Cierra is a WMHS senior.  She is the opinion editor for the student newspaper, The Zebra Print.  She plans to pursue a career in computer hardware engineering.