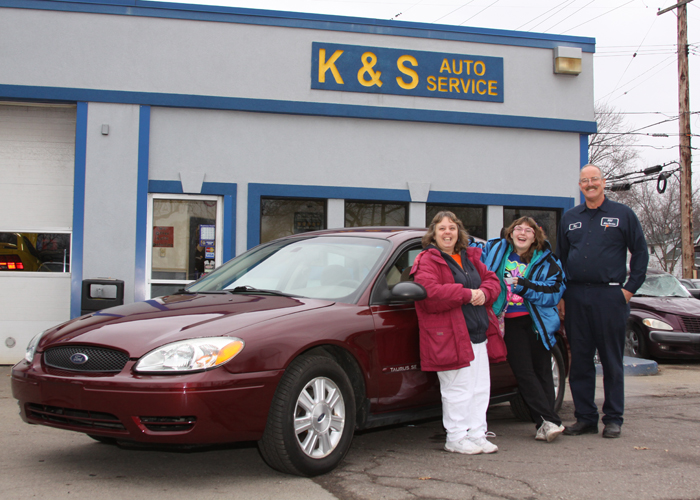 Thanks to Ray Kull (right), Frannie Dudash and her daughter, Rebecca, were surprised with a 2006 Taurus donated to her by K & S Auto Service in Wayne. Photo by John P. Rhaesa

By Jenny Johnson – “Oh my God mom, you are getting a car,” shrieked Rebecca Foster when her mom Frances Dudash was surprised with a 2006 Taurus donated to her by K & S Auto Service in Wayne.
It was the best Christmas gift. Frances Dudash is a Wayne resident and Wayne-Westland Community Schools employee.
K&S Auto is celebrating 30 years in business and Ray Kull, owner, decided he wanted to do something to give back to the community.
“I wanted to present a local needy resident with a car,” he said.  “This community has supported us for 30 years in and I wanted to give back.”
Kull said he received about 25 nomination letters and it was hard to narrow down a winner.
“Frannie is a single mom with no one to help her at all. She has a young daughter and needs to get around,” Kull said. “I hope it makes their life easier.”
“I don’t know what to say,” Frannie said.
“Your welcome is good enough,” smiled Kull.
The 2006 Taurus needed some body and mechanical work and K&S put in new brakes, an alternator and gave it a tune up. They will also stand behind their work for one year, he said by providing warranty work and oil changes.
Employees at the Wayne Westland Community School District transportation department nominated Frannie for the award. She is a bus aide there and a kitchen helper at Franklin Middle School. In addition, the Transportation Department took up a collection for a gas gift card and to help her with the cost of license tabs and car insurance.
For the past two years Frannie and her daughter, Rebecca, an eighth grader at Franklin Middle School, have walked everywhere – work, school and the grocery store.
Frannie said she was completely surprised to be standing in the parking lot of K&S Auto with the keys to a new car in her hand.
“I didn’t know what to think,” she said when the bus she was on pulled in to K&S instead of going to Franklin to drop her and her daughter off.
“I was just frustrated because I was going to be late for work,” she said. Bus driver Michelle Willibey had been stalling on her route until it was time to deliver Frannie to her special surprise.
“They told me I was going to be picked up by Missy and they said to wait for her. She was late so I started to walk and then Missy beeped the horn when we got to the corner,” she said. Frannie thought Missy wanted to give her a ride because she was still recovering from bronchitis.
All last winter’s cold and snow Frannie and Rebecca walked everywhere. Sometimes Frannie would arrive at work with wet pants from the snow and she would stay wet all day.
Director of Transportation Scherice Roark said, “I can’t think of anybody who deserves this more than Frances. You will find her walking all over Wayne and Westland to get to where she has to go. She is a wonderful employee. She doesn’t miss work.”
Frannie was in tears and disbelief when she opened the door of her new car for the first time and started the engine.
“I didn’t think it was true,” she said. Frannie said she has wanted to get another car since the engine blew in hers a couple of years ago.
“I have been trying to have enough money to pay our bills,” she said. Now she will have the means to take her daughter to the doctor and go and visit a sick relative.
Both Frannie and Becky wore their seatbelts and huge smiles when Frannie  started the car for the first time.
“I would like to thank everyone at the bus yard and everyone who participated in this and for making this a surprise for me,” she said.

Nomination Letter
The employees of Wayne Westland Transportation would like to nominate Frances Dudash for the vehicle giveaway. Frannie is an honest hardworking single mom who is in desperate need of a vehicle. Frannie has been without a vehicle for about three years. She has not been able to get ahead enough to purchase a vehicle.
She walks with her young daughter everywhere. They go in all kinds of weather conditions. Frannie is a resident of Wayne and is also employed by the Wayne Westland Community Schools. She works in food service and the transportation department. She also does odd jobs to make extra money.
Frannie and her daughter are truly in need and are a well deserving wonderful family. Please consider the Dudash’s for your giveaway.

Soaring with the Blue Angels