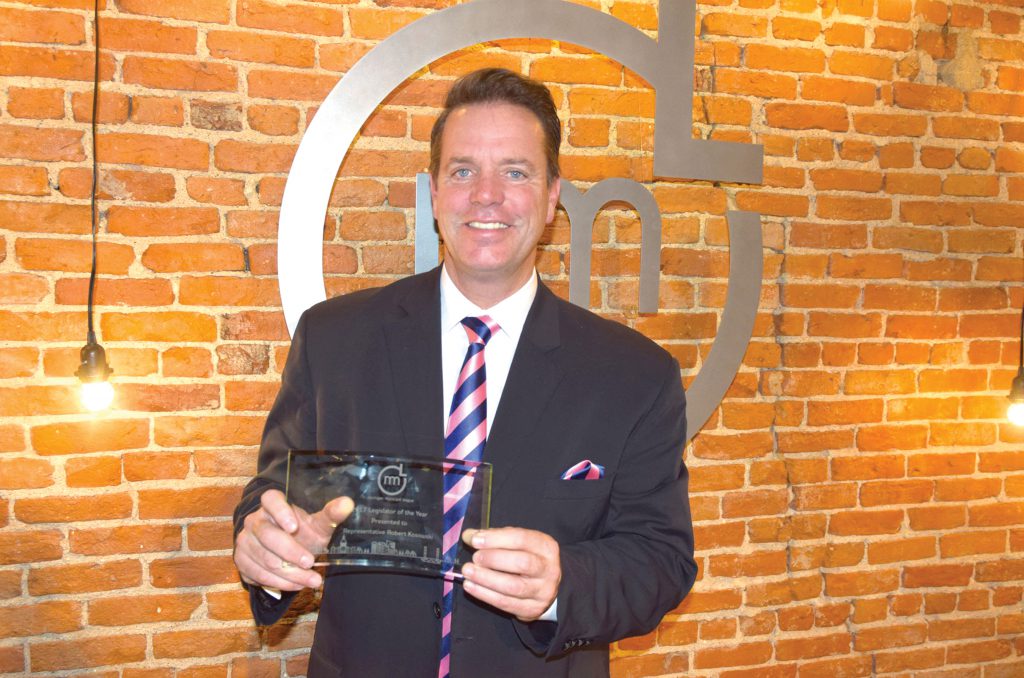 The Michigan Municipal League has honored State Rep. Robert Kosowski (D-Westland) as the League’s 2017 Legislator of the Year. The award was formally presented to Rep. Kosowski during the League’s annual Capital Conference Awards Gala March 21 in Lansing.
Rep. Kosowski represents Michigan’s 16th House District, which comprises the entire city of Wayne and a portion of the city of Westland.
Rep. Kosowski is serving his third term in the House, and before serving in the Legislature he worked as the City of Westland Parks and Recreation director. He worked for Westland for more than 20 years. He was also a member of many advisory boards. Kosowski studied business management at Adrian College and Wayne State University. He and his wife, Elizabeth, have two sons: Andrew and Austin. The family has resided in Westland for nearly 20 years.
Wayne Mayor Susan Rowe presented Rep. Kosowski with the award. “During his time in the state House, Representative Kosowski has distinguished himself as a thoughtful policy maker and earned the respect of his colleagues on both sides of the aisle,” Rowe said. “Representative Kosowski has proven time and again that he values good policy over partisanship. His door is always open to the League and his constituents. The League looks forward to working in partnership with him through the remainder of his time in Lansing.”
Rep. Kosowski has been an outspoken, supportive voice on numerous issues that have been critical to the Michigan Municipal League and its member communities, including his leadership in attempting to restore cuts to revenue sharing, protecting Tax Increment Financing as an economic development tool, and supporting government immunity in the event of sewer backups during extreme rainfall, Rowe said.
The Legislator of the Year Award is presented each year to lawmakers for their instrumental actions in the Michigan State Legislature on behalf of local communities. These individuals are recognized for their efforts in the passage of legislation that will benefit local governments or who have fought consistently to support local government.
Michigan Municipal League is dedicated to making Michigan’s communities better by thoughtfully innovating programs, energetically connecting ideas and people, actively serving members with resources and services, and passionately inspiring positive change for Michigan’s greatest centers of potential: its communities. The League advocates on behalf of its member communities in Lansing, Washington, D.C., and the courts; provides educational opportunities for elected and appointed municipal officials; and assists municipal leaders in administering services to their communities through League programs and services. Learn more at mml.org.