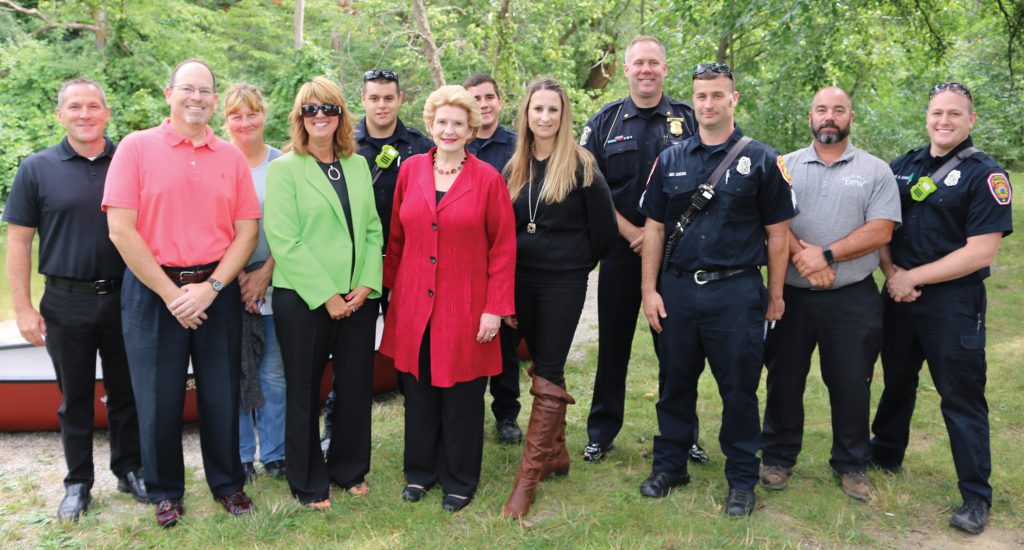 By Carolyn Marnon – Michigan State Senator Debbie Stabenow visited Wayne on August 4 to advocate for the Great Lakes and river restoration. She also visited several local small businesses, including Karma Coffee and ICON Computer Solutions.
About 40 people gathered by the river in Goudy Park to hear Senator Stabenow talk about increasing support for river restoration after proclaiming it “a beautiful pure Michigan day.” Blessed to live in a most beautiful state, she stated water is who we, as Michiganians, are and that we need to protect our water. Twenty percent of the world’s fresh water surrounds Michigan.
In 2010, Senator Stabenow authored the Great Lakes Restoration Initiative, also known as GLRI. The federal government budgeted $300 million every year to GLRI to help respond to events and emergencies. One of these, Asian Carp, had a quick response because the money was in the budget to deal with it. They didn’t have to go through a process of trying to procure funding to take care of the issue.
The Wayne Road Dam was built in 1914 to store water for fighting fires. It was more recently removed to help connect the Rouge River to make it better suited for fish to migrate and to allow for canoeing without restrictions in the waterway. One hundred twenty-one miles of waterway are now connected, native plants are growing and there is a path along the river to the bridge where the dam once stood. Senator Stabenow was presented with a small crystal block with a pocket-sized version of the dam on top.
After the last couple months she has had, Senator Stabenow said “sitting quietly is very alluring to me,” referring to the wooden log bench down by the river. “We can have a meeting in the canoe,” she joked later to several city employees as pictures were being taken.
In conclusion, Senator Stabenow said, “Speak out on ways we can work together to protect the water.”