By : thewaynedispatch
Comment: 0
Tag: Matt Rochon., The artist behind the mysterious John Wayne posters over the past two years 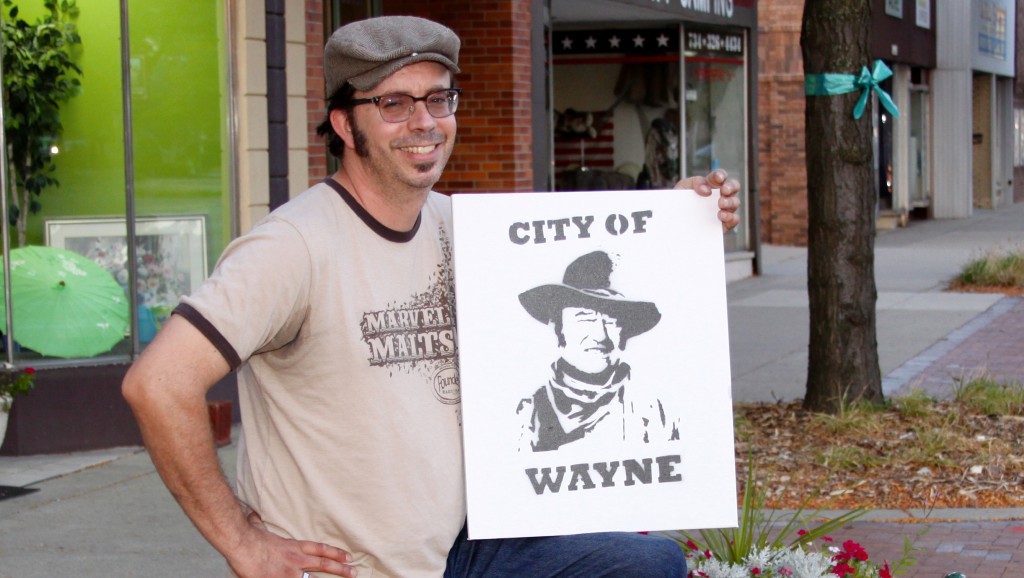 The artist behind the mysterious John Wayne posters over the past two years, Matt Rochon.

By Carolyn Marnon – He could be Wayne’s answer to Banksy, the well-known British street artist.  Matt Rochon, who grew up in Wayne and is currently a resident of Garden City, is the artist behind the mysterious John Wayne stencil art that has popped up in various places in downtown Wayne over the past couple years.
Matt has always loved art, but it wasn’t until some years ago when he saw Dick Tracy art on the ground in an alley in Ann Arbor and thought it was cool that he became an artist. In 2009, he did a stencil of Robert E. Lee for the University of Virginia in different colors.   He learned about graphics and found his art calling. “I think anyone can do art.  You just have to find your thing.”  Matt’s thing became stenciling.   He uses Photoshop and Illustrator to make his street art. His first art showing was at Under the Trees Art Festival in Garden City Park in 2009 where he sold 5 or 6 pieces.
Two years ago, he began making stencils of John Wayne and began putting them up around downtown Wayne.  He did it anonymously because he “wasn’t sure how the public would react.” The once shy Matt is now coming out of his shell to share his art with others. He would one day soon like to show his work in a temporary gallery, something that could happen in Wayne with the right support.
A freelance web designer, Matt works on the Garden City DDA website.  He approached Kim Dold, the DDA’s director, about putting up some art in the city.  She agreed and the Don Knott’s project began. Matt does his art because “I want to brighten up people’s days.” He didn’t get paid.  He just wants to see “art on the street.”
When I met Matt, he was getting ready to put up the Don Knott’s project in 11 windows of a vacant building in Garden City.  The building, owned by the Garden City Moose Lodge 538, is at Ford and Middlebelt.  As sweat dripped down our backs from having the sun shining directly on us, we chatted about his art as Matt prepped the windows for stenciling.  As he washed each of the windows, he thought it would take him an hour to get all his stencils up.  He had already done the stenciling on brown kraft paper he gets at the dollar store. All he needed to do that evening was wash the windows and adhere the stencils with homemade wheatpaste, a mixture of flour and water. Wheatpaste is used often in street art because of its ability to dry hard and thus make the art more difficult to remove. The star of the project is Don Knotts, for no other reason than “I just like him,” stated Matt.  “He’s goofy.”
Several hours later, after the “fun part” of hanging stencils, Matt called it a night.  He had adhered two stencils to either sides of the entry doors.  I had helped on the second stencil by tearing kraft paper to fill in the window areas not covered by the primary stencil paper.  The wheatpaste is applied to the clean window, the stencil (or kraft paper) adhered, and then more wheatpaste is rolled over the paper.  As simple as the process is, it turned out to be time-consuming.  When we left, Matt had 9 more windows to come back and do.  So much for getting it all done in one hour.
Matt also makes signs by recycling plastic-core (a corrugated plastic like that used for political signs) he gets from the parts supplier in Livonia where he works.  Their trash is his treasure.  He recently donated 2 John Wayne stencil signs to Wayne Main Street to use in their fundraising efforts and would like to do more art for the citizens of Wayne to enjoy.
Although there are street artists who paste their art to whatever they can find, Matt will not put up his work unless he has permission.  He has also done stencils of Alfalfa, Eloise and John Lennon wearing a Garden City t-shirt.  You can see more of his stencil art at uncannystencils.blogspot.com.  He does not have a personal website at this time, but he is always looking for work as a website designer.  As one of his blog posts reads “if you know anyone who needs a website done, just let me know. Email me. Call me. Send a carrier pidgeon (sic). Smoke signals. Bottled message down a river. Bat signal. Banner behind a crop duster. Sky writer. APB. Notes under windshield wipers. Sticky notes on my back. Morse code. Bullhorn. Singing telegram. Serenade at my window in the moonlight. Write me a song, get a record deal, get that song played on the radio and I’ll know what you mean as I drive down lonely roads with diamonds on my windshield. Write a message in the sand with a stick. Spray paint a dog with “I need a website” on his side and sic him on me. Carve it in a tree with a heart around it.”

Making a difference around the world