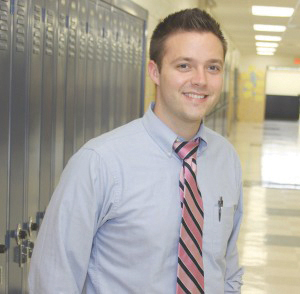 English is an English teacher at Wayne Memorial High School.

Wayne Memorial High School teacher Kevin English has been selected by the Michigan Council of Teachers of English as the 2017 Touchstone Award Recipient (Creative Writing Educator of the Year).
This award recognizes high school creative writing teachers. Kevin Weber, Wayne Memorial High School principal, nominated English for the award.
Weber noted English’s dedication to children, equality, reading and excellence in teaching creative writing.
“I think my favorite thing about Creative Writing at Wayne Memorial has been getting to craft real pieces alongside students. Every day, we talk about genre, audience, and purpose. We’re analyzing writing for their content and their craft, and we’re studying mentor texts every day to learn from other writers,” English said. “We’re also trying hard to develop the lifelong habits that so many writers have in common by writing every day, by sharing our writing and receiving feedback, and by taking real risks and seeing what happens. I see this award as a celebration of the sometimes grueling work that writing is, and I’m hoping to encourage more students to sign up for Creative Writing in the future. Writing is more than just a thing we do; it can be part of our identities!”
English is in his fifth year of teaching at Wayne Memorial High School. He has taught English 9, English 10, Science Fiction & Fantasy, and Creative Writing. During his time at WMHS, he has served as a teacher leader for his building’s Reading Apprenticeship team, as a building representative for the Wayne-Westland Education Association, and most recently became one of the directors of his building’s mentoring program, Champions of Wayne. He is one of the inaugural members of the International Literacy Association’s “30 Under 30” list, and he received a classroom library from the Book Love Foundation in 2014.  He is currently working on planning a summer writing camp for teens with two of his former students.
English will be honored at the Touchstone Award Ceremony at the Michigan Youth Arts Festival in Kalamazoo on May 19, 2017. He is also a candidate for Michigan Teacher of the Year.