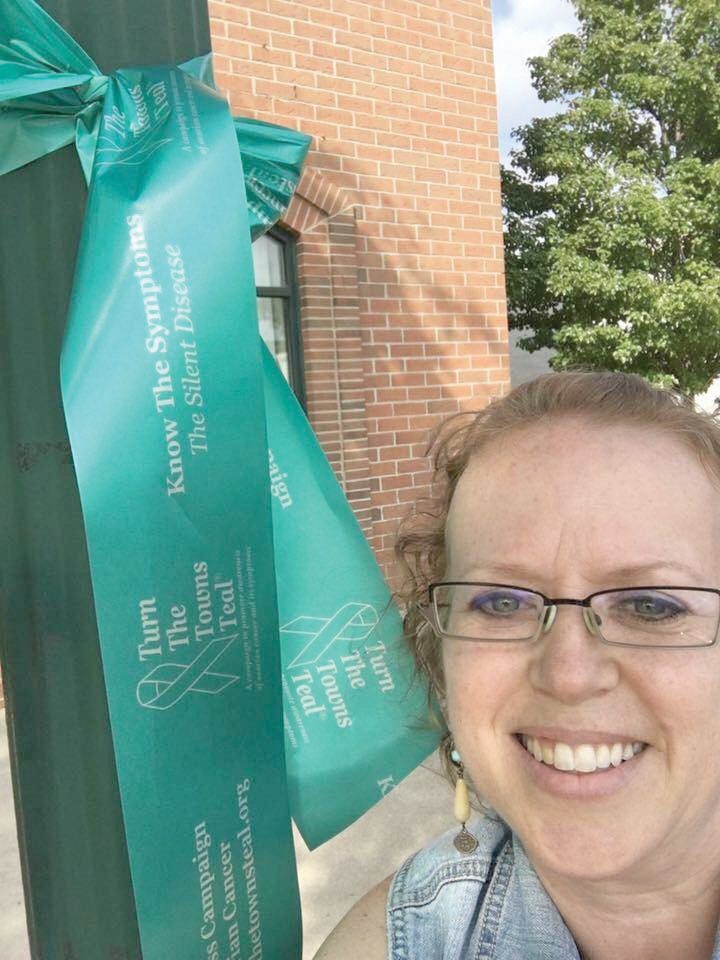 By Carolyn Marnon – Every year for the past six years, Carpet One in Westland has wrapped teal ribbons around the trees and light posts on the main thoroughfares in Wayne and Westland. The teal ribbons are part of Turn the Towns Teal®, a national awareness campaign for ovarian cancer.
A woman telephoned Cathy Buchanan, owner of Carpet One, to ask if she could get one of the teal ribbons for her daughter-in-law, Annette Siesse, who was undergoing treatment for ovarian cancer. Cathy provided a ribbon for Annette.
The next year, the woman called again asking if her son, Chris Siesse, could help when the Carpet One employees made their rounds tying the ribbons. While they were tying ribbons on Michigan Avenue, Chris came to help. Cathy gave him and Annette t-shirts and that was the start of a beloved friendship.
Cathy says Annette loved sunflowers and the Concerts in the Park each summer. Annette and Chris lived in Wayne by Goudy Park. Annette could hear the music from her house. The music and the concerts kept her happy. Her favorite phrase was “Happiness is a choice.” It became the family motto. Annette lost her battle with ovarian cancer in February.
Each year, Carpet One closes in the morning so all the employees can be involved with tying the teal ribbons throughout the towns of Wayne and Westland. “If I’m able to change the world for someone, make an impact…” Cathy trails off. There is a 94% survival rate if ovarian cancer is caught early. If it reaches Stage 3, survival rates are slimmer, says Cathy. She also says that the test for ovarian cancer, a simple blood test, is not covered by insurance.
Carpet One does not raise money for Turn The Towns Teal. Cathy’s goal is to raise awareness and make people aware of this silent killer.
Potential symptoms of ovarian cancer are: bloating, pelvic or abdominal pain/discomfort, vague but persistent gastrointestinal upsets (such as gas, nausea or indigestion), difficulty eating (or feeling full quickly), urinary symptoms (urgency or frequency), unexplained changes in bowel habits, unexplained weight gain/loss, ongoing unusual fatigue, back pain, menstrual changes, and pain during intimacy. If these symptoms persist for 10 days to 2 weeks, consult your gynecologist, physician or gynecological oncologist. The earlier the diagnosis, the better the prognosis. To learn more about Turn the Towns Teal®, visit the website www.turnthetownsteal.org